Origin of the French Medical Services 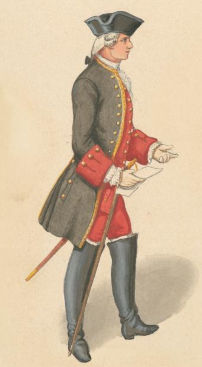 In France, the legislative creation of permanent medical services can be dated back to the edict on January 17 1708 when the king created the functions of:

This organisation replaced the rudimentary sanitary services who, since the appearance of permanent armies during the XVIIth century, were accompanying troops in campaigns.

By the Seven Years' War, the French medical services were divided into several parts:

The medical corps of the French army was very progressive. A special catheter by one Dr. André was tested in the Hôtel des Invalides, then 1,500 of them were promptly sent to the front. When alarmed at the high rate of venereal diseases, a special pill made by one Dr. Kayser was dispatched to the front, and there was even the suggestion that Kayser himself be sent to supervise administration of the drug.

France managed to maintain the best medical and surgical services in Europe.

Hospital services were subordinated to the commissioner of wars and articulated around:

These military hospitals were private enterprises or state-controlled corporation depending on circumstances and periods.

For each of these military hospitals, the personnel consisted of:

Wages in military hospitals, including wages of the surgeons, apothecaries et medical orderlies were at the charge of the entrepreneur, to the exception of the wages of the controller, chaplain, doctor, surgeons-majors et aides-majors who were paid by the king.

Military hospital personnel Doctors held a university doctorate and privileges from the Saint-Luc college. They had seniority over surgeons. Their social status was higher than the on of these same surgeons. They were skilled practitioners who had access to the highest spheres of the royal power. Their job might sometime grant them ennoblement. Besides the doctors inspectors generals, their order counted a single class without subaltern ranks.

Surgeons were the only practitioners who progressed by steps throught their carreer. They were first submitted to a rigorous selection, to examinations after a three years preliminary in-service training, then to supervised training, advanced courses followed by rigorous examinations allowing them to progrees through various ranks:

Apothecaries were initially civil employees working for an entrepreneur for a given campaign or a specific charge in a hospital. Around 1747, the multiplication of abuses in the military hospitals led to the creation of a corps of military apothecaries. Their number was established in proportion qith the number of hospital patients (1 apothecary per 50 patients). During their carreer, they progressed throught the different ranks:

Administratively, the army mobile hospital was placed under the command of a quartermaster general who was charged with its organisation, its installations and the supervision of its functionning. Generally, an army mobile hospital was operated as a state-controlled corporation. However, when financial situation worsened during the Seven Years' War, it often operated as a private enterprise.

In an army, there was usually one mobile hospital per 20,000 men. On average, an em=ncamped army had 4% of its effective unfit for duty. This rate jumped to 8% at mid-campaign and to 10% by the end of a campaign. These figures were dramatically incrased in case of an epidemic.

Theoretically, the strength of a mobile hospital totalled 115 persons but it could reach from 140 to more than 300 persons.

The transport services of a mobile hospital consisted of 3 captains, 3 drivers, 3 farriers, 3 wheelwrights, 3 saddlers, 42 carters, 40 wagons and 68 horses. However, these numbers could vary widely. A mobile hospital did not operate in a single entity and could form several detachments to support different corps of the same army. For instance, in 1759 at Frankfurt, the mobile hospital was subdivided into 4 sections. Dozens of new employees were hired for the occasion.

Fix hospitals had a temporary status and served as intermediaries between the mobile hospitals and the permanent hospitals established along the borders.

Administratively, fix hospitals operated as private enterprises, requiring the constitution of associations of individuals and speculators organised in compagnies fermières or compagnies des hôpitaux. All supplies, materials, medications, provisions and services were at the charge of the entrepreneur refundable according to a fix daily rate for an hospitalised soldier.

“The enterprise being on lease, it is transmitted from hand to hand and as everybody want to profit from his contract, it follows that the last buyer seek to recover with as much profit as possible, the low price at which he had commissioned” (Des Cilleuls)

In fact they were often led by lacklustre and sometimes incompetent people. The head of such a company, M.de Montlys, was too old to run the administrative chores of his hospital. MM. Savary and Stoffel, assistants to M.de Montlys, were derided as incompetent. When it was discovered that its hospitals were rendered little better than charnel houses, the company was fired, and replaced by a new company. While complaints remained with that company, these complaints were far less frequent, and the new managers tried their best, and did all they could to provide aid to the sick.

Fix hospitals were distributed in the rear of the theatre of operation by the quartermaster general, separated each other by a distance of about 20 km, according to the forces engaged. Their supply and provisioning had to be planned ahead. These hospitals were established in as large and as salubrious buildings as possible (essentially religious establishments of castles). Places where to establish hospitals in Germany were rare, as German prince often refused to let these facilities be established in the large cities, so hospitals were often placed in small villages, often with inadequate and sub-standard buildings. Supply was another problem: it was very difficult to get meat or bread, or any medical supplies to the hospitals; meat for example tended to arrive spoiled.

The number of fix hospital of an army varied. For instance, in 1757 the army of Westphalia counted one mobile hospital at Erfurt and four fix hospitals established at Eisenach, Fulda, Hanau and Heidelberg. In case of withdrawal, fix hospitals retired gradually one upon the other.

Fix hospitals had no train. Therefore each transfer required the assistance of the army train or of local enterprises (carters, mariners, etc.). The functioning of the fix hospitals has been much criticized during the Seven Years' War. They were almost systematically considered by contemporary witnesses as defective and the place of generalised armed robbery.

On the battlefield, wounded were transported on the shoulders of their comrades or using improvised means. In the absence of organised picking up service, porters were paid to carry wounded soldiers to the mobile hospital or even to a fix hospital.

Various means were used to transport wounded from a hospital to another:

The French army required that a sizeable meat ration was to be provided for the sick, but this had to have no heads, hearts, tripe or feet. The same regulation also ordered that the bread fed to the ill was to be of pure white wheat, and well cooked. The doctors also encouraged adding vinegar to water, in order to disinfect it, though a hot piece of rusty iron could do, and was in fact the regulation. Soldiers were expected to exercise everyday, and soldiers must button down their coats and cover their mouths on going outside, particularly in winter.

In spite of the measures taken to care for the troops, mortality was high. Colombier, a doctor in the French army at the time, estimated that for every 100 patients, 20 would remain in the hospitals for the remainder of the campaign, and 40 would die. Battle wounds were rarely fatal, the killer being mostly disease. Colombier for instance, cites dysentery, dropsy, and other illnesses as causes of death. The hospital in Aix-la-Chapelle (actual Aachen) had 229 deaths between 1757 and 1763, of which only 7 were from battle wounds; 209 were from "fevers", and the rest from other diseases.

Kennett, Lee; The French Armies in the Seven Year's War: A Study in Military Organisation and Administration, N.C., 1967

User:Ibrahim90 for the initial version of this article.

Jean-Louis Vial of Nec Pluribus Impar for his authoraisation to translate and integrate an article written by F. Olier into our initial article.