In 1741, Philippe Joseph, comte de Rostaing, then commissioner of artillery, was sent to India to establish an artillery school and a powder manufacture. He took part to the campaigns on the Malabar coast and was then sent to Ile de France (today Mauritius Island) where he had to establish a saltpetre refinery and a powder mill. In 1748 and 1749, he served as commander of the land and naval artillery under the command of the chevalier de la Bourdonnais during the campaigns against the British in India and Ile de France. He returned to France en 1755.

Rostaing's experience of colonial campaigns where marches were made on trails instead of roads and draught animals were scarce; brought him to design a 1-pdr light artillery piece. This piece could be transported by men: 5 men to carry the gun barrel, 2 men to carry wheels, 1 man for each of the 2 brackets, 1 man for the axle.

The piece had a low recoil and allowed a firing rate and a range similar to the 4-pdr piece à la Suédoise whose tests in France were conducted at the same time. One can compare this piece à la Rostaing to pieces of the same calibre developed in northern states such as Denmark and various small German states; pieces often designated as amusett or amusette. Its lightness, to ease its assembling and disasssembling, rendered this piece fragile and difficult to reinforce without increasing its weight.

We have not been able to trace back the original pieces, probably cast and built in India. However, the comte de Rostaing seems to have been very active as soon as he returned to France in 1755 and the first pieces are rapidly cast. In the Gazette de Hollande of 1759, it is mentioned that:

“The marquis d'Hérouville, lieutenant-general and director of engineering, and M. de Pellerin, commissioner and 1st commissioner of the Navy give all their attention to works conducted at Le Havre. One will transport there 60 cannon tested at the arsenal of Paris and who fire 22 shots in one and a half minute... it is the marquis de Rostaing, maréchal de camp and officer of the Corps Royal de l'Artillerie who has invented them.”

A mistake is introduced here which would feed a common confusion: it was indeed the comte le Rostaing who invented this piece while Louis Charles, marquis de Rostaing was at this time maréchal de camp and commander-in-chief of the artillery at Le Havre. 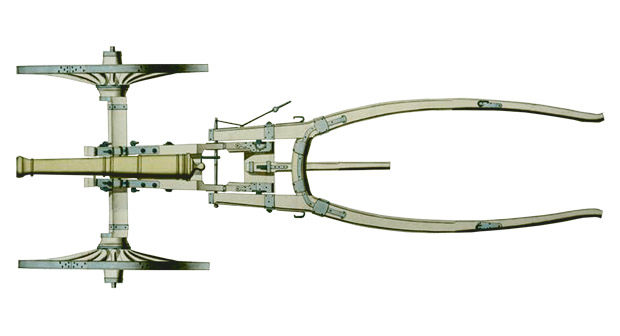 For this invention, the comte de Rostaing received in a royal grant of 1180 livres “in consideration of the invention and improvement of a new piece which he has produced.”

If the rate of fire of 22 shots is certainly overstated, it remains that a large number of pieces were cast. In 1759, the army of the marquis de Contades operating in Germany counted 24 such pieces. The comte de Rostaing would even propose to replace the pieces à la Suédoise by his own model.

In November 1759, the maréchal de Broglie wrote about these pieces:

“I believe that they are excellent for light troops provided that each is drawn by a small horse and that we dispose of a small and extremely light caisson hitched up to two horses to carry ammunition. Under these conditions, one could lead them by the most difficult roads of Germany.” 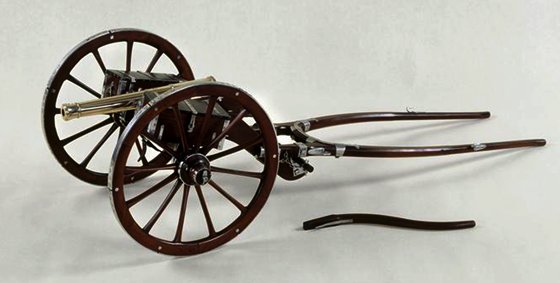 Despite their small calibre, their lightness and ease of deployment make them very useful pieces in may circumstances. To support light troops in their coups de main as done by the Volontaires de Flandre and the Volontaires de Hainaut during the Seven Years' War, to serve in the colonies (in 1772 a regulation gave 2 pieces à la Rostaing to the regiments assigned to Iles de France (today Mauritius Island) and Ile Bourbon (today Ile de la Réunion), as mountain artillery (in the Alps during the Revolutionary and Napoleonic Wars), or finally mounted on gunboats.

Gribeauval in his 1765 reform dismissed the pieces à la Suédoise as being too heavy and not very efficient but he kept the piece à la Rostaing which would not be abandoned for good before the great reform of the artillery in 1802.

If the carriage was standard, it had no wheeled limber, it was a very original system consisting of a pair of shafts which was directly fixed to the carriage.

Gribeauval convinced of their interest proposed a very detailed drawing in his work on the Collection Complète de la Nouvelle Artillerie.

Service of the piece à la Rostaing was provided by 8 fusiliers with “high pay” as specified in the regulation creating the colonial regiments in 1773.

As mentioned before, the existence of two Rostaing serving in the artillery during the same period has created lots of confusion. Philippe Joseph, comte de Rostaing (1719-1796) was the inventor of the piece designated by his name in India during the War of the Austrian Succession; while Louis Charles, marquis de Rostaing (1705-) served under the command of the maréchal de Saxe during the War of the Austrian Succession. The marquis de Rostaing had a prestigious carreer and as the French proverb goes “on ne prête qu'aux riches”, so for certain authors he mistakenly became the inventor of the piece à la Rostaing.