The uniforms of the French dragoons during the Seven Years' War were regulated by the ordonnance of May 1 1750. In this regulation, the king stipulated that the uniforms of a dragoon regiment would, from then on, never be entirely renewed at the same time but should be renewed one third or one quarter at a time. The following text is a condensed version of this regulation.

On April 9 1757, a new regulation was issued, changing the distinctive colours of several regiments because the previous uniforms were considered too similar from one regiment to another.

The two following plates have been made by the famous French uniformologist Michel Pétard and originally published in the magazine Uniformes Number 66 in March-April 1982. Mr. Pétard has kindly authorised us to reproduce these plates in our article but retains full copy right on them. These plates depict the uniforms of a French dragoons in 1735. The general aspect of these uniform changed very little between 1735 and 1757. The leftmost plate illustrates a trooper of Vitry Dragons which would become de l'Hôpital Dragons in 1739 and La Ferronnaye Dragons in 1749.

A fatigue cap, bordered with a 2.7 cm wide woollen braid, of the colour assigned to each regiment. Dragoons also wore a 10.8 cm high black woollen tricorne bordered with a 3.62 cm wide silver braid (0.9 cm inside and 2.72 outside). A black cockade was fastened to the left side of the tricorne by a narrow black strap and a small button.

As the line cavalry, for combat dragoons wore a tricorne reinforced with an iron cap.

The coats and waistcoats of brigadiers, corporals, anspessades (lance corporals), carabiniers and dragoons were made of blue, garance red or vermilion Lodève or Berry woollen cloth, depending on the regiment. The coats and waistcoats were lined with Aumale serge or cadis-canourgue (???). The lining of the waistcoat was always white. Cuffs measured 16.25 cm high with open buttonholes. The front of the coat was ornamented with buttons and white laced buttonholes on both side down to the pocket. The pocket flaps had 3 buttons but had no real pockets, the latter being of plain fabric hidden on both sides in the pleats of the coat between the lining and the woollen cloth. There was an epaulette on the right shoulder (the aiguillette had been suppressed earlier) and a plain shoulder strap on the left shoulder.

Greatcoats were made of red or blue Lodève woollen cloth with 3 agréments on each side of the same colour as the epaulettes.

Each trooper was responsible to equip himself with leather breeches.

At the outbreak of the Seven Years' War, French dragoons were still wearing the very distinctive bottines, a type of strong blackened leather gaiters fastened on the outer side of the leg with straps and buckles. A spur was also affixed to each bottine. This type of gaiters was a compromise between the light gaiters of the infantry and the strong boots of the cavalry. However, the bottines were rapidly (as early as 1758) replaced by oiled veal leather soft boots and, for foot service, white gaiters.

Every trooper was equipped with an infantry musket with a bayonet, 1 pistol and a sabre (copper fittings, 89.33 cm long). Carabiniers were armed with a rifle instead of a musket.

The pistol was of the 1733-34 cavalry model, measuring 48,6 cm long (31 cm for the barrel) and weighing 1,230 kg. However, several colonel ordered or made the armourer modified pistols to a shorter barrel of 27 cm. The Model 1754 musket measured 154,3 cm (115 cm for the barrel) and weighed 4,180 kg. During marches, the musket was carried on the right side of the saddle with the butt downward. It could also be carrier à la grenadière (slung across the shoulder).

The red leather cartridge pouch contained 30 shots and was similar to the model carried by infantry.

For all regiments, the saddle cloth and housings were made of red Lodève or Berry woollen cloth lined with plain fabric and bordered with a 4.06 cm wide woollen braid in the distinctive colour of each regiment. Only Colonel Général Dragons et Mestre-de-Camp Général Dragons were allowed to retain the trophies embroidered on their housings.

The saddle was à la Royale, of the same model as the saddle of the cavalry regiment but slightly smaller. All harnessing was of black leather. 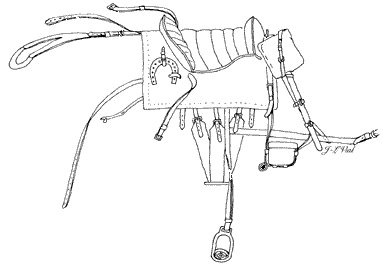 French Dragoons saddle – Source: Jean-Louis Vial as per the work of Dugué Mac Carthy on the French cavalry and La Porterie's manuscript on military institutions

Drummers of the royal regiments wore the king's livery while the uniforms of drummers of other regiments wore their colonel's livery. Their saddle clothes and housings Besides the drummers, each regiment had a tambour-major attached to its first company.

Since they carried no tools nor musket, drummers were armed with 2 pistols.

La Chesnaye, in his dictionary, specifies that the shell of the drum was smaller than the one of infantry regiments.

Some correspondence from the time of the Seven Years War mentions oboists in some dragoon regiments, Royal Dragons for instance.

The sleeves of brigadiers and corporals were ornamented with 3 agrémens en tresse (probably brandebourgs) half silver half silk measuring 2.25 cm wide and 10.83 cm long.

The sleeves of carabiniers and anspessades were bordered with a half silver half silk braid measuring 2.25 cm wide.

Officers were also armed with a musket and a bayonet and carried a cartridge pouch containing 6 cartridges. This musket was shorter than the muskets carried by the troopers. It measured only 1.447 m (1.069 m for the barrel) and was mush lighter, weighing about 2.5 kg.

Jean-Louis Vial of Nec Pluribus Impar for his kind authorisation to reproduce his articles and material.