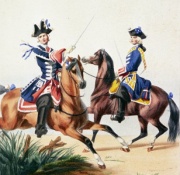 Each of the four companies deployed into two squadrons of 165 guards, including 12 brigadiers, 12 sous-brigadiers, 6 standard-bearers, 6 trumpets et one kettle-drummer. The four companies counted a total (excluding staff) of 80 officers, 120 NCOs, 28 musicians and 1,172 men.

To be admitted in this corps, one had to measure at least 5 feet 4 inches, to be well constituted and well "faced", to be of noble extraction or at least "exceptional" and to be catholic. 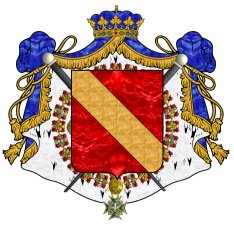 This company was created in 1440 under the reign of Charles VII. It marched at the head of the Maison du Roi. It initially consisted of Scots noblemen but it gradually recruited among French troops until, despite its name, the unit did not count a single Scot. Nevertheless, the tradition of answering "hamir!" (I am here) when on guard duty remained.

The 24 members of the Gardes de la Manche, who accompanied the king in all his public outings, were recruited among this company. 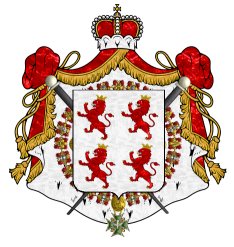 This company was created on September 4 1474 by Louis XI as his personal body guard.. In 1515, François I transformed this unit into the first French company of his Gardes du Corps. 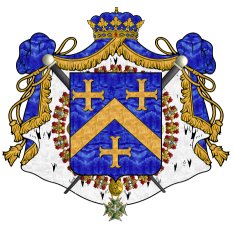 This company was created in 1479 by Louis XI at Plessis-lez-Tours. 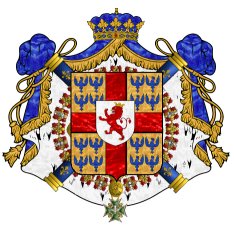 This company was created on March 1 1516 by François I.

The unit did not take part to the early campaigns of the Seven Years' War, remaining at Versailles.

In 1761, the unit took the field with the army of Soubise. It was present at the battle of Vellinghausen on July 16 but was not engaged.

In 1762, the unit formed part of Condé's Lower Rhine army. It was present at the action of Nauheim on August 30 but was not engaged. Troopers were armed with a sword, a pistol and a carbine.

There was no specific colour assigned for the horses of the troopers. 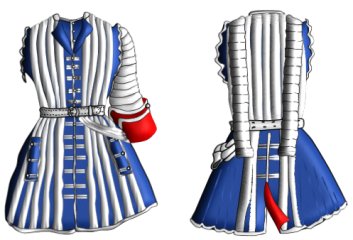 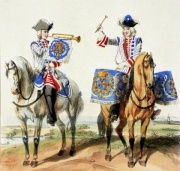 For the musicians of all companies, the saddle cloth, housings as well as the aprons of the kettle-drums and the pennants of the trumpets were blue decorated in silver.

Like for all units belonging to the Maison du Roi, the musicians were mounted on buckskin horses.

The standards of all companies were made of silk fringed in gold and silver; embroidered with a golden the Royal Sun with the motto Nec Pluribus Impar. The flagpoles were golden. There were six standards per company. Each company had its own distinctive colours: