Jäger's work (see References) mentions that 6-in howitzers were fielded in Germany at some time during the Seven Years' War.

The barrel seems to be proportioned just like the 8-in howitzer illustrated in the next section with a length of 2.25 feet and a calibre of 4.5. 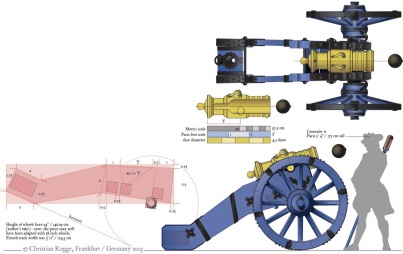 The barrel illustrated here has been reconstructed based on an illustration found in the French magazine La Sabretache with additional details found in Michel Decker & Sylvie Leluc, Petits modèles d'artillerie published by the Musée de l'Armée in Paris in 1994. In the latter publication, the barrel length is estimated at only 95 cm while the author's (Christian Rogge) calculations, based on Struensee's tutorial for finding the metal strength of the various parts of the barrels, give a length of 97.5 cm (exactly 5 Paris pied).

Prior to the introduction of this piece, the French did not produce any howitzers. Those in use were all Dutch and English pieces of various calibres captured in 1693 during the battle of Neerwinden. According to Decker & Leluc a Bavarian 30–pdr piece is said to have served as template to this first genuine French howitzer design. Oddly enough, in the same book, they also state that it was a 25-pdr. Both versions may well be true.

The piece seems to have been designed by the founder Jean Maritz around 1743, but first serial casts started only later, most likely in 1745, at the foundry of Douai. The first notable use of this new piece was probably at the siege of Maastricht in 1748. The sources provide confusing data here.

N.B.: in Christian Rogge's reconstruction, the diameter of the shot has been used as a base to derive the dimensions of the barrel and of its carriage.

Using the Austrian or the Prussian systems, this howitzer would be designated as a 30-pdr.

The sketch in the accompanying illustration depicts the method used to cut the bracket cheeks. The figures are based on a tutorial found in Struensee's Anfangsgünde der Artillerie published in Breslau in 1760 which worked with French sourced material. The recommended length of the raw elm tree plank was 8 Paris foot (252 cm). In this sketch, all figures are in relation with the diameter of the shot even though, by this time, French constructors preferred to specify all dimensions in feet and inches. However, the dimensions continued to be essentially based on the former custom to measure all dimensions in relation with piece's own calibre scale.

Accordingly, for this 8 inches piece, proportions can be easily calculated. Height and width of the 3 front transoms as well as the axle tree were proportioned 0.75 by 0.75 and the trail transom measured a more massive 1 by 1.75.

N.B.: in this table the weight of the shot is an estimation made by the author