Before 1752, an attempt had already been made in 1744 to regulate the uniforms of the regiments of hussars in the French army. However, three years after this regulation, Lynden Hussards and Beausobre Hussards still wore uniforms which did not follow the regulation. Things seem to have gradually improved till 1752.

The uniforms of the French hussars during the Seven Years' War were regulated by the ordonnance of May 15 1752. In this regulation, the king stipulated that the uniforms of the hussar regiment would, from then on, never be entirely renewed at the same time but should be renewed one third or one quarter at a time. The following text is a condensed version of this regulation.

The two following plates have been made by the famous French uniformologist Michel Pétard and originally published in the magazine Uniformes Number 83 in 1984 in an article entitled L'homme de 1752 – Le Hussard de Beausobre. Mr. Pétard has kindly authorised us to reproduce these plates in our article but retains full copy right on them. 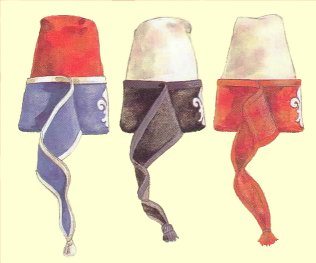 Details of the mirlitons of the French hussars in 1752, from left to right: Bercheny, Turpin, Polleresky – Copyright: Michel Pétard

The shakos were made of white felt to the exception of those of the Bercheny Hussards who wore red shakos by special privileges. The shakos were decorated with a fleur de lys and a white plume on front and with the distinctive colour of each regiment:

However, this white shakos soon proved to be not very practical for campaigning. In July 1755, all regiments of hussars were authorized to dye their shakos black. They still had to maintain their distinctive colour for braids and ornaments. Bercheny Hussards kept their red shakos.

The pelisse, the dolman and the trousers were always Hungarian style, made of Lodève or Berry woollen cloth dyed sky blue.

The pelisse was identical for all regiments. It was decorated with 3 rows of pewter buttons: 18 large buttons in the middle and of 18 small half-round buttons on each side. These buttons were linked together by white cords. The sleeves and the pockets were edged with a 1.35 cm wide white braid. The lining of the pelisse was made of white sheepskin. The pelisse was bordered with black sheepskin.

The dolman was 18 cm shorter than the pelisse. It was was decorated with 3 rows of pewter buttons: 18 large buttons in the middle and of 18 small half-round buttons on each side. These buttons were linked together by white cords. The dolman was lined with a strong ecru fabric, decorated with white braids and had 2.7 cm wide cuffs in the distinctive colour of the regiment bordered with a white chevron.

The Hungarian style trousers were lined with a strong ecru fabric. However, the regulation also specified that each hussar should supply his own buff leather over-trousers. In 1762, an ordonnance mentioned that the trousers should be decorated with a white braid.

The sash was garance red with barrels in the distinctive colour of each regiment (this description probably refers to a type of barrel sash commonly used in hussar uniforms of various country).

The greatcoat was made of royal blue Lodève woollen cloth (lined with the same cloth) and had a large collar.

Troopers wore Hungarian style soft black boots. These were not edged with any braid.

The 5.41 cm wide bandoleer was made of red leather.

For all regiments, the saddle cloth and housings were made of red Lodève or Berry woollen cloth bordered with a 4 cm wide braid in the distinctive colour of each regiment. They were decorated with 5 white fleurs de lys, each bordered in the distinctive colour of the regiment. Exceptionally, the fleurs de lys on the saddle cloth of Bercheny Hussards were surmounted by a crown.

Brigadiers seem to have worn the same uniform as the troopers.

The shakos of the officers were similar to those of the troopers but were bordered with a 4.06 cm wide braid à la Mousquetaire and ornamented with a silver fleur de lys.

The saddle cloth and housings were similar to those of the troopers but were bordered with a silver braid (4.06 cm wide for captains, 2.7 cm wide for lieutenants).

The sabres of officers had gilt handles and their scabbard was made of shagreen.

The sabretaches of the officiers were made of scarlet woollen cloth bordered with a silver braid and decorated with a fleur de lys. Exceptionally, the fleur de lys on the sabretache of Bercheny Hussards was surmounted by a crown.

This article is built around two plates created by Michel Pétard and initially published in the magazine Uniformes Number 83 in 1984.