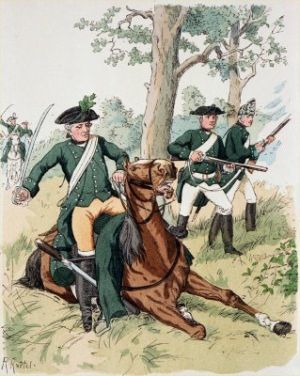 The unit was raised in May 1757 by Vice-Oberjägermeister Count von der Schulenburg, who had been promoted to major-general. The unit consisted of:

Soldiers were raised among hunters, gamekeepers and other persons experienced with rifles.

On July 22, 1757, a third foot company, under Captain von Wrede, was added to the regiment. On August 1 of the same year, a fourth foot company was raised and placed under the command of Captain von Linsingen.

By 1763, the Freikorps consisted of 3 mounted companies and 4 companies of foot. It was disbanded at the end of the war.

On July 26 1757, the regiment took part in the Battle of Hastenbeck where its foot jägers were detached on the Obensberg while the mounted jägers were scouting in front of the right wing.

On May 26 1758, a detachment of 160 men of this unit was part of Wangenheim's Corps encamped at Dorsten. On May 31, this corps accompanied Ferdinand of Brunswick in his offensive on the west bank of the Rhine. On June 23, the unit took part in the Battle of Krefeld where it was deployed on the left wing under the command of Lieutenant-general von Spörcken.

On April 13 1759, part of the the unit was at the Battle of Bergen where it was attached to the vanguard. After a fight, Freytag's light troops occupied Marköbel to the north-east of Bergen, pushing back the French picquets. In June, 5 coys of the regiment were part of the Allied Main Army under the command of Duke Ferdinand of Brunswick and 5 other coys were with Imhoff in Hesse. On August 4, the regiment was part of the detachment, under the command of Urff, sent towards Paderborn through Lemgo, Detmold and Lippspringe. On August 5, Urff's detachment intercepted the French heavy baggage at Detmold, capturing the escort (about 800 men), the Saxon military chest, Contades' confidential correspondence and the baggage of most senior officers.

By the end of January 1760, the unit was attached to the Allied Army of Ferdinand of Brunswick. On April 28, a French force (Apchon Dragons and some volunteers) under M. de Vair launched an attack on Vacha on the frontiers of Hesse, forcing the Allied force (2 coys of Freytag Foot Jägers, 1 coy of Freytag Horse Jägers, and 1 sqn of Black Hussars) under the command of Colonel Freytag to abandon the town. Freytag then took position on a neighbouring rising ground to delay the French while Allied reinforcements (2 grenadier bns) were sent to his support. Upon arrival of these reinforcements, the French force retired pursued by the Allies beyond Geisa. In this affair, the Allies lost 30 men killed or wounded and the French 120 men. On July 16, the unit joined the Hereditary Prince near Treysa. He used it as an escort while reconnoitring the French positions before launching a surprise attack. The unit then participated in the Engagement of Emsdorf where the Hereditary Prince captured most of Glaubitz's detachment. Throughout the war, the regiment was heavily involved in the Kleinkrieg. 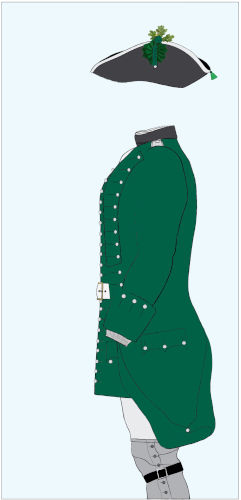 Rank and file were armed with a rifle.