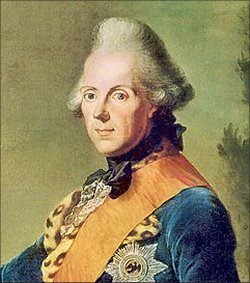 Friedrich Heinrich Ludwig was the 13th child of King Friedrich Wilhelms I of Prussia and his wife, Queen Sophie Dorothea (von Hannover). Confusingly, he was known as 'Prinz Heinrich von Preussen' or 'Prince Henri', a fact which makes research difficult for the uninitiated.

In 1740, at the age of 14, Henri was made Chef (Colonel-in-Chief) of the Prinz Heinrich von Preußen Fusiliers, a post he held until his death. He first took the field in the War of the Austrian Succession (1740-1748) and also served in the Seven Years War (1756-1763). Although he was ever in his elder brother's shadow, he knew his generalship well enough to criticise some aspects of Frederick the Great's martial skills and foreign policy in a pamphlet published in 1753 under the nom-de-plume of 'Maréchal Gessler'. His military training was overseen by Colonel von Stille, whom he accompanied as adjutant (Aide-de-Camp) in the First Silesian War (1740-1742), fighting in the Battle of Chotusitz on May 17 1742. From May 1744, he received permission to drill his regiment himself.

In the Second Silesian War (1744-1745), Henri again took the field and was almost taken prisoner on one occasion. He earned his spurs in the Prussian victory in the Battle of Hohenfriedberg (present-day Dobromierz) on June 4 1745. On July 15 of that year, he was promoted to major-general. He also distinguished himself in the clash of Trautenau on the subsequent retreat. He then fell ill with smallpox and had to leave the field. Over several campaigns, he proved himself to be a much more careful general than his brother, husbanding his men well and losing fewer casualties.

On June 25 1752, Henri married Princess Wilhelmina von Hessen-Kassel, with whom he led a distant relationship.

At the outbreak of the Seven Years War in 1756, Henri commanded an infantry brigade in the invasion of Saxony.

On February 16 1757, Henri was promoted to lieutenant-general. He took part in the Prussian invasion of Bohemia. In the Battle of Prague (Sterboholy, May 6), he commanded the Prussian left wing (Generals von Schwerin with the infantry and von Zieten with the cavalry), which rolled up the Austrian right wing and secured the Prussian victory. Following the Prussian defeat at Kolin (June 18) which led to the abandonment of Bohemia by Frederick the Great, he commanded the rearguard under Field-Marshal Keith as they fell back into Saxony and was distinguished in the clash at Leitmeritz. In the legendary Prussian victory of Rossbach (November 5) Henri commanded the right wing. He was wounded and forced to return to Leipzig until the spring of 1758.

In 1758, Henri was given command of an independent force, covering the line of the River Elbe against Franco-Imperial incursions. He also managed to recover the Duchy of Brunswick. In December, he was promoted to General der Infanterie.

In 1759, Henri went over to the offensive and advanced southwards to the River Main. After the devastating Prussian defeat by the Austro-Russians in the Battle of Kunersdorf (August 12) his royal brother fell into a state of depression for four days, in which time, Henri assumed command of the army. In this time, he was very active. On September 25, after slipping away from under Austrian Feldmarshall von Daun's nose at Görlitz two days earlier, he defeated an Austrian corps of 3,000 men under General von Wehla at Hoyerswerda and pushed the French-Imperial army back west to Bautzen. The minor victory at Hoyerswerda caused Daun to abandon further operations against Prussia this year. On October 29, Prince Henri defeated another minor Austrian corps at Pretsch.

In 1760, Henri was appointed commander-in-chief in Silesia; he relieved Breslau (present-day Wroclaw) and prevented the union of the Austrian and Russian armies.

In 1761, Henri was given the Saxon theatre to command and was again successful.

On October 29 1762, with 22,000 men, Henri defeated an Austrian force of 30,000 under Prince Stolberg in the Battle of Freiberg, between Dresden and Chemnitz, causing them some 7,400 casualties. This was the last major action of the war.

After 1763, Henri embarked on a diplomatic career, visiting Stockholm and St. Petersburg, preparing the ground for the First Partition of Poland in August 1772. He was offered the crown of Poland, much to his royal brother's annoyance. The partition took place, Prussia, Russia and Austria each slicing off chunks of the hapless state.

In 1778, Henri again commanded an army in the War of the Bavarian Succession, a very low-key affair, but showed little energy or activity, which earned him much criticism from the king.

Following the death of Frederick the Great in 1786, Heinrich hoped to have great influence over his successor, Friedrich Wilhelm II, but this was not to be.

In 1790, in the grounds of his palace in Rheinsberg, on a lake, east of Wittstock, north of Neuruppin and northwest of Berlin, Henri built an obelisk of some 15 m height. It is inscribed on front:

"Monument dedicated to all Prussian heroes, who by courage and knowledge have earned the right to be eternally remembered."

Also in the middle:

"To the eternal memory of August Wilhelm, Prince of Prussia"

The sides of the obelisk are covered by numerous names of Prussian officers of his personal acquaintance, including some that had fallen out of favour with Frederick II. This has led to the impression, that Prince Henri wanted to show his opposition to Frederick. However, he denied this in his dedication speech.

Henri was an active Freemason.