This company was created on October 1 1690 for the Duc de Berry, third grandson of King Louis XIV.

During the Seven Years' War, the company was under the nominal command of the Duc de Berry while a captain-lieutenant assumed effective command:

In 1763, when it became the property of the Comte d'Artois, the company was renamed Gendarmes d'Artois. 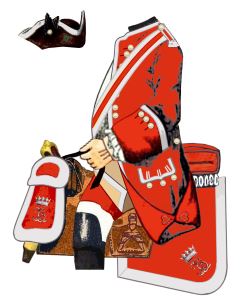 Troopers were armed with a sabre (silver handle and red cord), a pair of pistols and a rifle. Officially for combat they wore a blackened breast plate over their leather jerkin and they often removed their coat and folded it on the porte-manteau. In such an outfit, French cavalrymen looked quite the same as Prussian cuirassiers. In cold weather, the coat was worn over the breast plate.

The horses of the troopers were of various colours. A red rosette was knotted at their mane and tail.

No information available yet for the uniform of the musicians.

The silken standard (exceptionally called guidons in the Gendarmerie de France) had a blue field heavily decorated with silver and gold embroideries, fringed in gold and silver; centre device consisting of a lion with the motto “VESTIGIA MAGNA SEQUETUR”. As for all company standards of the Gendarmerie de France, the obverse and reverse were identical. 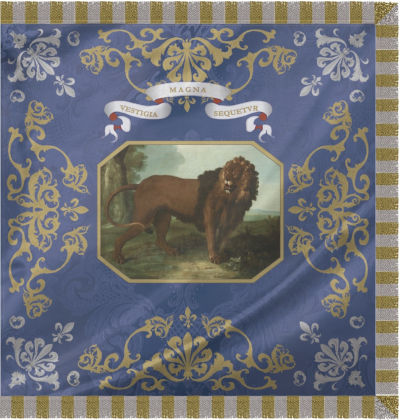 The standard was carried on a red tournament lance by a trooper designated as porte-étendards (even though the standards of the Gendarmerie de France were called guidons).