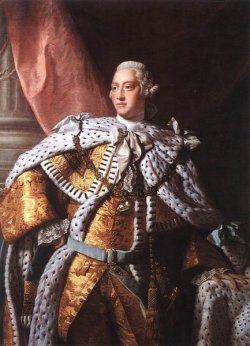 George William was the son of Frederick, Prince of Wales, and grandson of George II. He would be the first English-born sovereign of his dynasty.

In 1751, after his father's death, George William had been educated in seclusion from the fashionable world under the care of his mother and of her favourite counsellor the Earl of Bute. He had been taught to revere the maxims of Bolingbroke's "Patriot King," and to believe that it was his appointed task in life to break the power of the Whig houses resting upon extensive property and the influence of patronage and corruption. That power had already been gravely shaken during the Seven Years' War when they were obliged to leave its management in the hands of William Pitt.

In 1760, when he acceded to the throne, George III worked in continuation of Pitt's endeavours. However, his methods were very different and he tried to reassess the king's authority upon the parliament.

On September 8 1761, George III married Charlotte Sophia of Mecklenburg-Strelitz. The same year, he got rid of Pitt and carried on the negotiations which led to the Treaty of Paris in February 1763.

After the war, the king repeatedly interfered with the parliament through a body of dependants known as the king's friends who constantly voted according to his wishes. For several years, no ministry was stable. Lord Bute resigned in 1763, succeeded by George Grenville till 1765, the Marquis of Rockingham till 1766, Pitt (now Chatham) till 1767, then the Duke of Grafton...

George III was one of the proponent of the right to tax America to cover the expenses caused in the late war. In 1770, he appointed Lord North the second Earl of Guilford, a minister of his own selection, prime minister, realizing his ambition of controlling the parliament.

In March 1778 the French ambassador in London announced that a treaty of friendship and commerce had been concluded between France and the new United States of America. Lord North wanted to resign in favor of Chatham but the king would not hear of it. Great Britain was now at war with France, and in 1779 she was also at war with Spain.

George III was still able to control the disposition of office in the parliament. However, before the end of 1779, two of the leading members of the cabinet, Lords Gower and Weymouth, resigned rather than bear the responsibility of so ruinous an enterprise as the attempt to overpower America and France together. Lord North retained office, but he acknowledged to the king that his own opinion was precisely the same as that of his late colleagues.

In 1780, agitation rose in the country for economical reform, attacking useless expenditure upon sinecures and unnecessary offices in the household. George III was offended by what he considered interferences on his privileges.

On November 25 1781, the news of the capitulation of Yorktown reached London and Lord North resigned on March 10 1782. George III then called the Marquis of Rockingham to office at the head of a ministry composed of pure Whigs and of the disciples of Pitt. The king authorized the new ministry to open negotiations for peace. Rockingham died on July 1 and the king chose Lord Shelburne to be prime minister. The Whigs opposed this nomination, reopening the quarrel about the constitutional power of the king.

Before the end of 1782 a provisional treaty was signed with America, preliminaries of peace with France and Spain being signed early in the following year.

On February 27 1783, a coalition of Whigs under North and Fox defeated Shelburne. On April 2, the coalition took office with Portland as prime minister. George III was not able to interfere with this change of government and had to wait for a better moment. On September 3, the definitive treaties with the United States of America, France and Spain were simultaneously concluded. At the beginning of December, George III got the opportunity that he was waiting for to interfere with the parliament once more. He disavowed the unpopular India Bill in the House of Lords by his personal intervention with the peers. On December 17, the bill was rejected. On December 18, ministers were dismissed. George III then appointed Pitt the Younger as prime minister.

On March 25 1784, George III dissolved parliament. The country rallied round the crown and the younger Pitt. This ministry finally stood because it had appealed to the constituencies against their own representatives.

George III warmly supported the voyage of discovery of the islands and coasts of the Pacific Ocean. In the early days of the Royal Academy, its finances were strengthened by liberal grants from the privy purse.

In October 1788, George III was out of health and in the beginning of November his insanity was beyond a doubt. Pitt and Fox contended over the terms on which the regency should be committed to the Prince of Wales. However, before the end of February 1789, George III was able to write to Pitt thanking him for his warm support of his interests during his illness. On April 23, the king went in person to St Paul's to return thanks for his recovery.

On October 1 1801, preliminaries of peace were signed between Great Britain and France, to be converted into the definitive Peace of Amiens on March 27 1802. The ruler of France was now Napoleon Bonaparte.

On May 18 1803, the declaration of war to France was laid before parliament. The war was accepted by all classes as inevitable, and the French preparations for an invasion of England roused the whole nation to a glow of enthusiasm only equalled by that felt when the Armada threatened its shores. On October 26, George III reviewed the London volunteers in Hyde Park.

On February 12 1804, the king's mind was again affected. When he recovered, he found himself in the midst of a ministerial crisis. Public opinion considered Pitt, not Addington, as the proper man to conduct the administration in time of war. Pitt with the king's consent formed a new administration.

Pitt died on January 23 1806 and a new ministry was formed under Fox. The latter died on September 13 of the same year. The relations between the ministry and the king soon deteriorated. The ministry proposed a measure enabling all subjects of the crown to serve in the army and navy in spite of religious disqualifications. The king objected even to so slight a modification of the laws against the Catholics and Dissenters, and the ministers consented to drop the bill. The king asked more than this. He demanded a written and positive engagement that this ministry would never, under any circumstances, propose to him "any measure of concession to the Catholics, or even connected with the question." The ministers very properly refused to bind themselves for the future. They were consequently turned out of office, and a new ministry was formed with the Duke of Portland as first lord of the treasury and Mr Perceval as its real leader. The spirit of the new ministry was distinct hostility to the Catholic claims. On April 27 1807, a dissolution of parliament was announced, and a majority in favour of the king's ministry was returned in the elections which speedily followed.

The overthrow of the ministry of 1807 was the last political act of constitutional importance in which George III took part. The substitution of Perceval for Portland as the nominal head of the ministry in 1809 was not an event of any real significance, and in 1811 the reign practically came to an end. The king's reason finally broke down after the death of Princess Amelia, his favourite child. The Prince of Wales (the future George IV) became prince regent. The remaining nine years of George III's life were passed in insanity and blindness, and he died on January 29 1820.