A squadron of hussars was raised on May 1 1735. It was designated as the Leibhusarenschwadron.

In 1758, three additional squadrons were raised and the unit was renamed Husarenregiment von Gorcy.

On August 29 1763, at the departure of its former owner, the regiment took the name of Husarenregiment von Bouwinghausen.

In 1798, the last existing squadron was incorporated in the Garde du Corps as Chevaulegers.

In 1759, the regiment served in Hessen under French subsidies. On November 3, the Duke of Württemberg was instructed by the Duc de Broglie to march to Gemünden with his contingent. On November 11, the Württemberger Contingent arrived at Gemünden. The duke then sent his hussars on the Kinzig River. On November 19 and 20, the Württemberger Contingent (about 10,000 men), led personally by the duke, arrived at Fulda and took up its winter-quarters to assist the French army. The duke sent a detachment, including most of the regiment, to Hersfeld. This detachment took post along the Fulda River where it created a cordon to the Württemberg Army's quarters with each patrol in close touch to one another. On Friday November 30, an Allied force under the Hereditary Prince of Brunswick launched a surprise attack on Fulda, forcing the Würtemberger Contingent to retreat precipitously southwards on Bruckenau in the general direction of Frankenland and Württemberg. From December 19 to 23, the Württemberg Contingent (now only 7 bns) was at Steinberg. On December 25, the Duke of Württemberg marched to Schotten.

In 1760, the entire regiment took part in the campaign of Saxony against the Prussians. 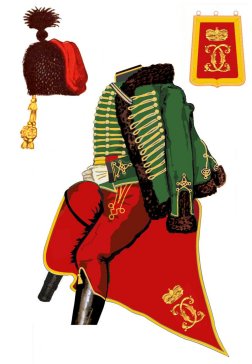 In 1748, the troopers of the Leibhusarenschwadron were mounted on grey horses, while their officers had roan horses.

In 1748, the Leibhusarenschwadron had 1 kettle-drummer and 3 trumpeters. The aprons of the kettle-drums were described as "expensively embroidered with gold and silver and draped with sleeves".

According to the Militaerplan of 1758: there were 6 Cornets (2 per squadron) in this regiment.

According to a report dated 1748, the standard of the Leibhusarenschwadron is described as "richly embroidered with gold and silver". There is no field color mentioned, but because this was the only standard, it should be the Leibstandarte and had a white field.

Volker Scholz for the info on horses, musicians and standards