One of the most famous and effective ranger units raised in colonial North America, Gorham's Rangers started out as a Massachusetts provincial auxiliary company, recruited in the summer of 1744 at the start of King George's War. Governor William Shirley ordered the unit raised as part of the reinforcements he sent to Nova Scotia to relieve the then-besieged British garrison at Fort Anne in Annapolis Royal. Over the next seven years the unit proved remarkably effective at suppressing Acadian and Mi'kmaq resistance to British rule in Nova Scotia and helped to both expand and secure the British sphere of influence in the region. The company were reconnaissance experts as well as renowned for their expertise at both water-borne operations and frontier guerrilla warfare. Their signature tactic was a surprise amphibious raid on either Acadian and Mi'kmaq coastal or riverine settlements. Their primary mode of transport were large whaleboats that carried between ten to fifteen rangers each. This small unit was the main British military force defending Nova Scotia from 1744 to 1749.

Initially the rangers were a sixty man all-Indian unit led by British colonial officers and non-commissioned officers. The unit was captained by the politically well-connected and ambitious John Gorham III (1709-1751), who, prior to leading the rangers, had been a whaling captain and merchant from Yarmouth, Massachusetts, a small coastal town on Cape Cod. While his family had historically played an important role in colonial New England's military affairs, besides basic militia training in conventional warfare, Gorham had no prior ranger training or experience at frontier warfare. Nor did the company's junior officers, most of whom were his relatives. In the early days of the company's first deployment the officers learned their trade from the many veteran Native American soldiers who made up the company's rank and file. Most of the forty-eight privates were Wampanoag and Nauset Indians from Cape Cod. Some had served in Indian ranger companies twenty years earlier during Governor Dummer's War (1722-1726), a regional conflict the colonies of Massachusetts and New Hampshire fought against the Abenaki and other members of the Wabanaki Confederacy in Maine. Many of the Indian soldiers were also indentured servants who crewed whaleboats in the region's shore whaling industry or were crew members on early Yankee whaleships. A small contingent of six Pequawket Indians from the Saco River region of Maine also joined the company, several of whom were likewise veteran warriors. These including a man British colonists called "Captain Sam" (probably the Pequawket sachem mentioned in french records as Jerome Atecuando). Captain Sam served as the company's primary guide, translator and negotiator.

Gorham's unit served as the model for many future ranging companies and they helped teach frontier tactics to both American provincial troops and British regular army units. On several occasions during the period from 1747 to 1749 they instructed provincial forces sent to Nova Scotia in the basics of guerrilla warfare. And from the period from 1749 to 1751 six additional ranger companies were raised to help defend Nova Scotia, all consciously modeled on Gorham's Rangers. A commander of one of these units, George Scott, later helped organize and lead British light infantry units in the Seven Years War, whose tactics and uniforms he patterned on those used by Gorham's company.

From 1749 to 1751, the unit took part in the erection of the defensive works protecting the newly founded town of Halifax.

In December 1751, after the death of Captain John Gorham (he held the rank of lieutenant-colonel in the Massachusetts Provincial forces), he was succeeded by his younger brother Joseph (1724-1790) who was promoted from lieutenant to captain. In 1752, the other ranger companies raised in Nova Scotia were disbanded, leaving only Gorham's company active.

During the Seven Years War, now led Joseph Gorham, the company not only played an important role in fighting in Nova Scotia, but it also participated in many of the important campaigns of the war. Throughout 1755 to 1760, when not assigned elsewhere, they were the central players in Britain's efforts to subdue a low-level insurgency in Nova Scotia, fought by the Mi'kmaq Indians as well as Acadian rebels. The rangers also took an active part in the Acadian Removals (1755-1760), a large scale effort at ethnic removal/cleansing which rounded up and deported virtually the entire Catholic French-speaking Acadian population from the Canadian Maritimes in order to make way for Protestant British settlers. They also took part in the assault of Fort Beaujesour in 1755, the second siege of Louisbourg in 1758, and played an important role in the petite guerre and scorched-earth operations that took place around the periphery of the siege of Quebec in 1759. In 1761, the unit was officially placed on the British army establishment. The next year they took part in the expedition to Havana in 1762 where half of the company died from tropical disease. The company was disbanded there and its surviving members drafted into British regular army regiments.

Throughout much of the Seven Years War, Gorham's rangers were based out of Halifax, but they often operated in tandem with a sister unit, stationed at Fort Cumberland on the Isthmus of Chignecto. This sister company, modeled on Gorham's unit, was commanded by Captain Benoni Danks, and is often referred to as "Dank's Rangers." The companies were combined in 1761 into a Nova Scotia ranging corps of which Joseph Gorham was Major Commandant. Both companies numbered between ninety and one hundred men throughout the war, although Gorham's company was augmented for the siege of Quebec to 125 men. Dank's company was raised to the same size for the expedition to Havana.

By the mid-1750s, most of the original Indian members of Gorham's Rangers had long since been killed in combat, deserted, been captured, died from disease, or had chosen not to reenlist. While Indians from southern New England continued to be recruited for the company as late as 1761, and they remained a core element of the unit, most new members of the company in the Seven Years War were Anglo-Americans or recent Scots or Irish immigrants to America. And yet while Indians gradually dwindled to a minority in the company, the unit nevertheless continued to utilize the same tactics pioneered by the original Wampanaog, Nauset and Pequawket members in the 1740s, which were taught by the Gorham's to other Anglo-American and British commanders. Dank's Rangers likewise contained some New England Indians, but nowhere near as many as served in Gorham's company. Perhaps no more than a half dozen or so total served in Dank's unit.

In 1763, despite several attempts to revive the unit for Pontiac's Rebellion, the unit was disbanded.

NOTE: Scholarship on Gorham's Rangers frequently perpetuates a long-standing myth that Gorham's Rangers was initially made up of Mohawks from New York or Metis from Canada. Brian Carroll's resent well-researched article (New England Quarterly 2012) disproves this and found that after reviewing surviving muster rolls and other documents relating to the company, not a single Iroquois can be documented as having served in the company. Indeed, the Indians listed as serving in the unit, aside from the few Pequawket members who were from Maine, were clearly Wampanoag and Nauset Indians from Cape Cod. This can be corroborated by comparing the men's names with missionary society lists, deeds, probates, and vital records from Barnstable County in the 18th century. These records reveal most of these men hailed from the Indian communities at Mashpee, Herring Pond, Yarmouth and elsewhere on the Cape, in addition to Aquinnah on Martha's Vineyard, as well as other nearby southeastern New England Indian communities (Natick, Mashantucket, Mohegan, Niantic, etc.)

In 1755, along with New England provincial troops and British forces, the company took part in the Siege of Fort Beauséjour on the Isthmus of Chignecto, which connects current-day New Brunswick with Nova Scotia. Later the same year, Gorham's Rangers also took part in the Acadian Removals, also known as the Expulsion of Acadians.

In 1757, at the end of July, the company scouted French-occupied Louisbourg in anticipation of Lord Loudoun's (aborted) attack on the fortress. Gorham's men dressed as Acadian fisherman and sailed a captured fishing vessel rechristened "His Majesty's Schooner Monckton" directly into the harbor at night. Eventually an enemy warship fired on them, but the information they gathered, about the arrival of a French fleet and reinforcements, was the deciding factor in Loudoun abandoning the assault.

In 1758, the rangers took part in a number of campaigns to hunt down and capture groups of Acadians who resisted removal. These included missions to Cape Sables in Nova Scotia, the St. John's River Campaign, and an expedition up the Petitcodiac River. On June 8, Joseph Gorham and his unit distinguished themselves during the initial amphibious landing at the British expedition against Louisbourg.

In 1759, the unit (1 company) took part in the British expedition against Québec along with 5 other companies of Rangers. On August 14, Gorham's rangers sacked and burned Saint-Paul, far below Québec.

In 1762, the regiment was part of Burton's Corps sent from North America to assist the British force already besieging Havana. It arrived in Cuba on June 27 and took part in the siege and capture of Havana suffering heavy losses from sickness during the following months. After the capitulation of Havana, the remaining rangers were drafted into the depleted British regiments.

The rangers in this unit wore a variety of different uniforms over the course of its nineteen year history. For example at one point (circa 1750) they wore grey coats, while at other points they wore red, black, or brown ones. The “uniform” described in the following tables represents the ones issued in 1759 and 1761. While one describes a "Scottish bonnet" issued as headgear, for most of their history they are recorded as wearing leather "jockey caps"--usually with the brim turned up. Sources also suggest they wore European-style shoes, not moccasins as the descriptions below claim. 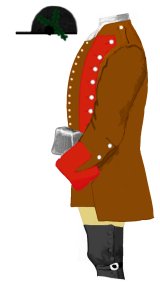 Troopers were probably armed with a "Brown Bess" musket and a hatchet. Records from later in the Seven Years War reveal they preferred lighter "carbine"-style muskets when they could get them. Some records also refer to them being equipped with bayonets as well as hatchets.

Ranger units did not carry colours.