The unit was created in late 1744 from a unit of Tatar Guards of the Principality of Kiev. Each pulk was comprised of a variable number of Hoffahnen. During the 1740s, a Hoffahn typically counted 71 men and consisted of:

For 1741, other sources give a different composition for a Hoffahn who counted 100 men:

In May 17 1745, the unit counted 8 Hoffahnen when it entered Silesia with the Austro-Saxon Army. On December 15, it was present at the Battle of Kesseldorf, together with the Belwedowsky, Rudnicki and Bertuszewski regiments under the command of von Sybilsky. In 1746, after the Treaty of Dresden (December 25 1745), the unit returned to Poland.

In 1764, the unit was transferred to the Polish Army and renames "5th Pulk Przedniej Straży (5th Pulk of the Forward Guard).

In 1792, the unit was involved in the Russo-Polish War and in the Kościuszko Insurection, taking part in the battles of Mir, Zelwa, Maciejowice and Praga).

At the outbreak of the war, in 1756, all the Pulks stayed around Kraków in Poland and did not participate in the Pirna campaign. The Pulk then counted some 426 men. In November, a few days after his arrival in Warsaw, the Elector of Saxony opened negotiations with the Court of Vienna about the use of his 6 remaining cavalry regiments stationed around Krakau (present-day Kraków) in Poland in conjunction with the Austrian army. An agreement was soon reached with Maria Theresa. On November 15, the regiment set off from from Krakau for Hungary. It took its winter-quarters in the Comitates of Neutra (present-day Nitra/SK) and Trentschin (present-day Trenčín/SK).

When the Saxon army was rebuilt in exile, the Pulk joined them in Hungary and operated with the Austrian army and then with the Reichsarmee from 1757 to 1762, mainly in scouting, raiding and skirmishing roles.

In June 1757, after the victory of Kolin, the unit was probably attached to a corps of light troops who followed the retreating Prussians. The unit took its winter-quarters near Welwarn (present-day Velvary/CZ).

On January 11 1758, the unit went to Raudnitz (present-day Roudnice/CZ). In April, it went to Moravia where it effected a junction with the 3 Saxon Chevauxlegers regiments. It was later attached to Daun's Army for the relief of Olmütz, as part of de Ville's Cavalry Corps, and distinguished itself in the so called “Little war” (Kleiner Krieg). On July 29, Prussian troops drove the regiment out of Kralitz (present-day Kralice na Hané) and back to Klenowitze. During the night, the Saxon Uhlans reoccupied their former positions.

At the beginning of 1759, the unit counted 602 men. By the end of November, it was in Saxony and took its winter-quarters near Stolpen.

In early June 1760, the regiment formed part of Lacy's Corps stationed in Saxony on the east bank of the Elbe. On July 20, during the relief of the siege of Dresden, along with the Esterhazy Hussars under Brentano, they evicted the Mohring Hussars from Leuben, coming close to the capture of Frederick the Great at the nearby headquarters on the Grune Wiese. At the end of September, the regiment also took part in the raid on Berlin raid under Brentano. It was active in raiding the countryside and sacked the Charlottenburg Palace with the Russian Cossacks. On November 3, at the battle of Torgau, the regiment was in outpost duty south of the city.

In 1761, the regiment was attached to Hadik's Corps as part of Daun's army in Saxony. From April 1, the regiment was increased to 1,000 men. It remained in Saxony for the entire campaign and did not take part in any major action. It took its winter-quarters around Chemnitz and later went to Penig.

Early in 1762, the regiment participated in a raid conducted by the Duke of Lobkowitz against Prussian outposts near Audigast and Groitsch. It was later attached to Maquire's Corps posted near near Dippoldiswalde as part of the Austrian army operating in Saxony. At the end of June, the entire Saxon cavalry corps was sent to the border between Saxony and Bohemia. In October, during Hadik's offensive against the Prussian Army of Saxony, Colonel Schiebel with his Uhlans occupied Hilbersdorf. Along with Prinz Albrecht Chevauxlegers, they captured a 12-pdr gun. In November, the regiment encamped near Fischbach while Lieutenant-General von Gößnitz's headquarters were established at Putzkau. The Saxon cavalry was in very poor conditions due to constant campaigning and a bad financial situation (troopers were unpaid for months). Uniforms were in rags and troopers exhausted. 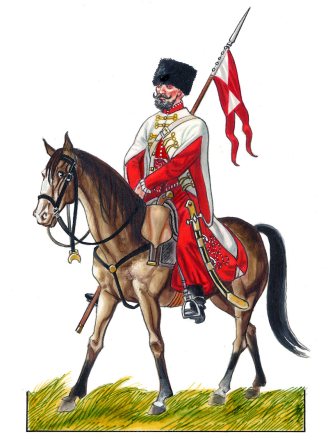 Troopers were armed with a lance, a sabre and a pair of pistols. The two-pointed lance pennon is red with white triangles.

Black middlehigh furcap. White overcloth with very wide and long sleeves. A little, low red upstanding collar, red turnbacks and red lining. On the collar red-white laces and the same lace on the breast where was on the right side (of the middle) 4 x 2 gilded buttons. On the turnbacks which reached halfway down the thighs were in the same red-white lace the crowned AR. Red waistcoat with red-white lacing along edges. Red baggy trousers reaching to the ankles. White-red sash. Black boots without spurs. All bearded, but no pigtails. Red end-pointed saddlecloth with wide gilded border.

Standards with a white cross on and four red squares; on the pole a gilded button.

Duffy, Christopher: By Force of Arms, Vol. II of The Austrian Army in the Seven Years War. The Emperor Press, 2008