The regiment was formed in 1748 from the grenadier companies of the 4 disbanded regiments of 2nd Garde, Jasmund, Allnbeck and Bellegarde. It initially consisted of 8 companies and was entitled a Grenadierbataillon. In 1749, it was reduced to 5 companies.

In 1756, the regiment was taken prisoner at Pirna.

In 1757, the regiment was reformed in Hungary. It consisted of 2 battalions raised among the rallied Referenten (troops who had deserted the Prussian army) and new recruits drawn from Bavaria. It served with the Saxon auxiliary corps with the French armies in all campaigns.

In 1756, the regiment consisted of 5 grenadier companies or 539 men. In 1757, it counted 8 companies formed in 2 battalions, as part of the Saxon auxiliary corps in the French service.

At the end of August 1756, when Frederick II proceeded to the invasion of Saxony, the battalion retired to Pirna with the rest of the Saxon army. At Pirna, the battalion was deployed on the right wing as part of von Crousaz's 1st Grenadier Brigade. The Prussians blockaded the Saxon army in Pirna from September 9 until October 15 when the Saxons finally had to surrender. The regiment was forcefully incorporated into the Prussian Army. However, since the grenadiers refused to take the oath to the King of Prussia, the regiment was not simply converted into a Prussian regiment. Its grenadiers were rather distributed among the Prussian infantry regiments.

In 1758, to avoid further contact with the Prussians, the reformed regiment marched through southern Germany and assembled in Strasbourg by July. On September 3 1758, it was part of the Saxon contingent, under the command of Prince Xaver, who encamped at Castrop, 15 km from Recklinghausen, on his way to make a junction with the French army of the Marquis de Contades in Westphalia. The contingent made this junction around mid-September. As part of Chevert's corps, it reinforced Soubise's army in Hessen. On October 10 1758, it first saw action at the battle of Lutterberg where its determined attacks decided the day for the French army. On October 20, the Saxon regiments rejoined Contades at Werl.

Besides the uniform worn at the beginning of the war in 1756 and after the capitulation of Pirna, the new regiments were re-dressed with white uniforms from Austrian depots, just adapting the distinctive colors. Because of the difference between Autrian and Saxon color pigments, the distinctive colors have perhaps changed a little bit (medium blue instead of light blue ?). 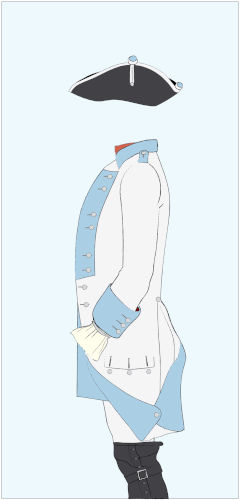 Officers and NCOs wore a black tricorne laced silver with a white cockade.

Leibfahne: white field wearing the Saxon-Polish coat of arms surrounded by rich white and red embroideries with a blue border, each corner was decorated with a flaming grenade.

Ordinarfahne: blue field with rich white and red embroideries wearing the Saxon-Polish coat of arms, each corner was decorated with a flaming grenade