The regiment entered into Russian service in 1738 as the Gruzinskiy Hussar Company, recruited from Georgians who had left Georgia under the command of Vakhtang VI of Kartli (who died during the journey). Initially, the company had 17 officers and 70 hussars. By 1739, the company had already distinguished itself when fighting against the Turks and Field Marshal Münnich ordered the creation of the Gruzinskiy Hussar regiment. The regiment was created on October 14, 1741 and theoretically counted 10 companies for a total of about 962 men (800 troopers). However, until July 1759, most Russian hussar regiments counted only 6 squadrons. Tielke specifically mentioned this regiment as counting 600 men during this period.

In 1742 the regiment fought in Finland against the Swedish at Frederikshamn on the shores of the Gulf of Finland. After the conclusion of the war, the regiment was stationed in Ukraine, then in Sviyazhsk, in the Province of Kazan, then in Kizlyar.

From 1742 to 1757, the soldiers of the regiment had a settled lifestyle in Ukraine, engaging in farming and living in the usual landowner manner of poor nobility.

In 1756, at the outbreak of the war, the regiment was stationed in Kegsgolm and Pskov. During the winter of 1756-57, it joined the Russian field army.

In 1757, the regiment took part in the campaign in East Prussia under General-in-Chief Count Apraxin. On August 30, at the Battle of Gross-Jägersdorf, it was part of the vanguard and belonged to Dolgoruki<s Brigade. When the Russian army deployed, it was placed in the second line of the left wing.

In January 1758, the regiment took part in the Russian invasion of East Prussia. At the beginning of August, it took part in the [[invasion of Brandenburg. On August 25, it fought in the Battle of Zorndorf where it was part of the second line of the cavalry left wing. Around mid-November, the regiment took up its winter-quarters in Garnsee as part of Resanov's 2nd Division.

On July 23 1759, the regiment took part in the Battle of Paltzig where it was attached to Demiku's Light Cavalry Brigade deployed on the right wing of the first line. A few weeks later, on August 12, the regiment fought in the Battle of Kunersdorf where it was deployed in the vanguard behind the Cossacks as part of Riazanov's Light Cavalry Brigade. In a report to Empress Elizabeth Petrovna after the battle, Saltykov pointed to "the courage and fearlessness of the Gruzinskiy Hussar Regiment under the command of Amilahvari."

At the beginning of 1761, the regiment was transferred from Tottleben's Corps, wintering in Pomerania, to Rumyantsev's Corps. The regiment was initially stationed at Schlochau (present-day Człuchów). During the campaign in Pomerania and the siege of Colberg, it was part of Rumiantsev's Corps; more precisely, along with Slobodskiy Hussars, it belonged to Amialchnaroy's Brigade. In May, the regiment counted 836 men (including 35 sick). On September 23 near Kiełpin, 300 men of the regiment, under the command of Ratayev, were forced back by Platen's cavalry. On October 7, 2 sqns of the regiment were sent to Greifenberg (present-day Gryfice) as part of Colonel Apocnin's detachment (Rizhskiy Horse Grenadiers, 3rd and 4th converged grenadiers bns, Miller volunteer bn, Igerstrom volunteer bn and 400 Cossacks). At Koldemanz, they took part in the capture of Major Potscharly's Prussian detachment (300 men of Belling Hussars, 200 volunteers of Grenadier Battalion 17/22 Rothenburg and 1 gun). The regiment wintered in Pomerania. 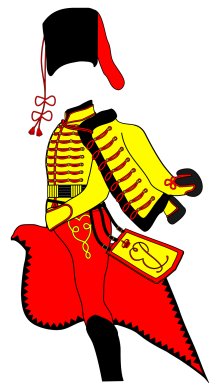