On the eve of the War of the Austrian Succession, in 1740, the duke Francesco III of Modena could field only his bodyguards (Guardia del Corpo) of 200 men and one infantry regiment: Palude Infantry which would become the Guardie a piedi (Foot Guards) in 1750.

In April 1759, after the appointment of the Duke Francesco III as governor of Milan by Maria Theresa, there were some 2,700 Modenese soldiers in the territory of Milan assuming garrison duties. However, the Guardia del Corpo remained in the duchy of Modena. 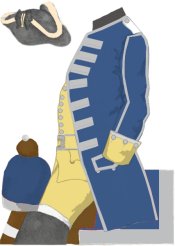 Troopers were armed with a sword, a pair of pistols and a carbine.

The officers wore the same uniform as the troopers with more elaborate laces on the cuffs and pockets.

The officers wore the same uniform as the troopers with the royal lace (alternating light blue and white squares) instead of the silver laces of the troopers.

The aprons of the trumpets were turquin blue bordered with the royal lace and decorated with the eagle of the House of Este (white eagle with a gold crown, and golden beak and claws) in their centre and 1 golden fleur de lys in each corner. The aprons of the kettledrums were similarly decorated.

Colonel standard: blue field bordered and fringed white; centre device consisting of the eagle of the House of Este (white eagle with a gold crown, and golden beak and claws); 1 golden fleur de lys in each corner.