The regiment of Walloon Guards was raised on May 1 1704. It served in the Household Troops.

During the War of the Spanish Succession, the regiment distinguished itself. After the war, its strength was greatly reduced, loosing most of its officers.

During the reign of Ferdinand VI, the regiment consisted of 6 battalions, each of 7 companies.

A Royal Decree dated December 6 1759 established the composition of the regiment as follows:

The ordonnance of July 2 1762, created four companies (each of 50 chasseurs and 2 NCOs), designated as Compañías de alternación. This reform lasted only until November 25 of the same year when the companies of chasseurs were disbanded and their troops distributed among the other companies.

In 1763, the regiment staff was increased by these additional troops: 1 corporal of the sappers, 6 sappers, 6 fifers and 6 master armourers. 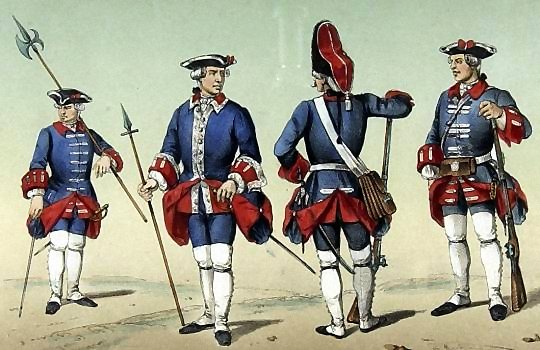 In 1762, the regiment was part of the army led by the marques de Sarria against Portugal. The chasseurs of the regiment were assigned to the protection of a bridge of boats on the Esla River where the army should cross. 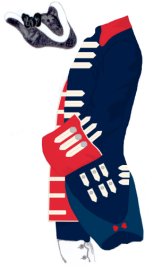 N.B.: the bearskin became taller during the reign of Charles III. It kept the white metal frontplate wearing the Royal Arms but the white braid decorating the upper part disappeared.

Same uniform as the troopers with the following exceptions:

The drummers of the Guards units wore the same uniform as the troopers but heavily laced (covering the coat and cuffs almost completely) with a braid looking very similar to the one used for the King's livery in the French infantry regiments (for example: the drummers of Picardie Infanterie).

As per the Album de Taccoliof 1759, the coronela (colonel flag) of the regiment was white with a red Burgundian cross terminated in each corner a golden crown. In the middle: the arms of Charles III surrounded by the necklace of the order of the Toison de Oro (Golden Fleece) and flanked by two golden lions.

As per the Album de Taccoliof 1759, sencillas (ordonnance flags) of the regiment was blue with a red Burgundian cross terminated in each corner a golden crown. In the middle: the arms of Charles III surrounded by the necklace of the order of the Toison de Oro (Golden Fleece) and flanked by two golden lions.

Juan José Torres and the Asociación Cultural de Modelismo Histórico Alabarda for the information and counselling provided for this article and for their kind authorisation to publish the plates of the Conde de Clonard.