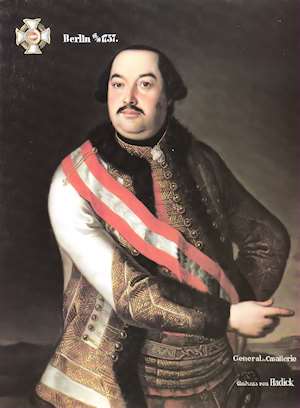 Andreas Hadik was born in a Hungarian family of lesser nobility. In his youth, he wanted to become a clergyman but, at the request of his father, he rather undertook a military career.

In 1732, Hadik was given the rank of officer and became the standard bearer in the Dessewffy Hussar Regiment in the Austrian Army.

In 1738, Hadik was promoted to the rank of captain.

During the War of the Austrian Succession (1740–1748), Hadik gained fame for his actions against the Prussians at the City of Neisse (present-day Nysa) using surprise attacks and tricks under the unwritten laws of the so-called kleinkrieg (guerilla war), relying on the excellent quality of his light cavalry hussars. During this war, in 1742, he was promoted once more, this time to the rank of lieutenant-colonel by Maria Theresa, the Queen of Hungary and Archduchess of Austria.

In 1744, Hadik gained the rank of commanding colonel of the Beleznay Hussar Regiment.

In 1748, Hadik attained the rank of General Feldwachtmeister (major-general) and was appointed commander of a cavalry brigade.

In October 1757, the already famous Hadik conducted a raid on Berlin while the main Prussian armies were busy fighting the Austrian in Silesia and the Franco-Imperials in Thuringia. With a force of 5,000 men (mostly hussars), Hadik occupied Berlin for a day and obtained a negotiated ransom of 200,000 thalers before leaving the city. For this brilliant action, Hadik was promoted to Feldmarshall Lieutenant and received the Great Cross of the Maria Theresien Order.

In 1758, Hadik was promoted to General of Cavalry. He fought with the Reichsarmee.

In 1763, after the war, Hadik was made count and governor of the Fortress of Ofen .

In 1764, Hadik became governor of the Siebenbürgen (present-day Transylvania), then president of the Congress of Karlowitz. He later received the estates of Futak.

In 1772, after the partition of Poland, Hadik became governor of the part of Poland attributed to Austria (Galicia and Lodomeria) an office that he assumed until June 1774.

In 1776, Emperor Joseph II made him Reichsgraf (Count of the Empire). Hadik also assumed the office of President of the Hofkriegsrat (Court War Council) until 1790. In two occasions, in 1778 (during the War of the Bavarian Succession) and 1789 (against the Turks), Hadik took the field at the head of the main Austro-Hungarian army. In 1789, he fell ill while besieging Belgrade and ceded command to Loudon.