There is no information on the creation of the artillery which was probably established in 1585, when Duke Julius had several guns cast.

In 1679, the artillery of Osnabrück was incorporated in the unit.

In 1705, at the death of Duke Georg Wilhelm zu Celle, the artillery of this principality was also incorporated in the Hanoverian artillery.

In 1725, Brigadier Welling presented to King George I his new invention: the Geschwindschütze (rapid fire gun).

In 1732, the “Ingenieurs-Corps” became an independent unit, separated from the artillery which was reinforced and organised in three staff-companies and now included drummers.

In 1741, at the beginning of the War of the Austrian Succession (1740-48), the artillery was reinforced. In 1743, it took part in the Battle of Dettingen. The same year, it was formed in a regular regiment. In 1744, its establishment was increased once more. At the end of the war, in 1748, the regiment consisted of six companies organised in two groups: three “staff-companies” and three “captain-companies”. Each of these groups had a staff of 66 men.

During the Seven Years’ War, the successive chefs of the regiment were:

In April 1756, five companies of the regiment were part of the Allied reinforcements sent to Great Britain. The “Lieutenant-Colonel’s Company” remained in Hanover where it was subdivided in three parts which were each organised as complete companies.

At the beginning of 1757, each company received 18 handy-men. In March, the Hanoverian artillery counted 8 companies for a total of 696 men.

At the beginning of the Seven Years' War, in 1757, the actual pieces in the army were very cumbersome and had an old-fashioned design. Most were loaded with loose powder rather than cartridges by many untrained gunners. These problems were tellingly displayed when a powder barrel exploded during an artillery duel during the Battle of Hastenbeck, causing chaos. As the war progressed, many of the cumbersome pieces were replaced by British or captured French guns. In addition, gunners gradually became highly trained and experienced.

On February 1, 1758, the regiment received 13 additional officers and men, bringing its total strength to 1,014 men. In June, two additional companies were raised, thus bringing the regiment to a total of 1,342 men.

The ranks of the artillery were filled, like the rest of the army, by voluntary recruitment. The artillery had the character of a craft-guild, as there was an indentured apprenticeship which had to be signed by those wishing to learn the science of gunnery. Artillery recruits received no bounty, but instead had to pay the sum of 6 Talers for instruction in the arts of gunnery and pyrotechnics.

The unit provided 16 men to handle each battalion gun and served the heavy artillery.

Throughout the war, the Hanoverian artillery was present in most engagements in the Western theatre.

In April 1756, five companies of the regiment were part of the Allied reinforcements sent to Great Britain. The “Lieutenant-Colonel’s Company” remained in Hanover. In December, the five companies previously sent to England returned to Hanover.

On July 26 1757, the Hanoverian artillery was present at the Battle of Hastenbeck.

In 1758, on June 23, a large contingent of artillery fought at the Battle of Krefeld. This contingent included 36 officers, 165 NCOs and 732 men, losing 10 killed and 219 wounded in the battle. Ammunition consumption in that battle was 97 18-pounder balls, 712 12-pounder balls, 786 6-pounder balls, 2,027 3-pounder balls and 524 3-pounder grape rounds. After this victory, the regiment was granted two captured copper kettle-drums. On October 10, a detachment of artillery took part in the Battle of Lutterberg where, besides the battalion guns, it manned four 12-pdrs and eight heavy 6-pdrs.

By the end of January 1760, the unit was attached to the Allied Army of Ferdinand of Brunswick. 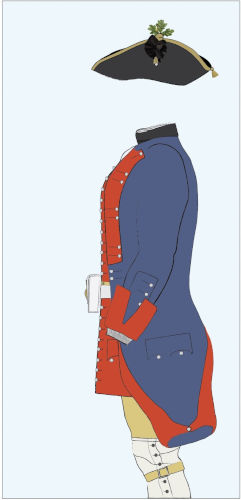 Gunners were armed with a sword framed with copper and an infantry style musket. 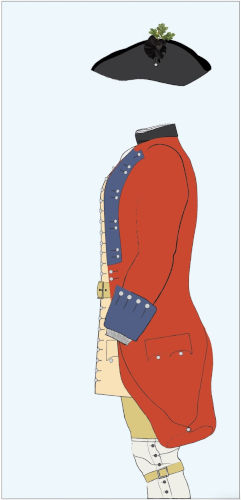 N.B.: some sources mention yellow buttons rather than pewter buttons