The House of Braunschweig-Lüneburg probably had a Lifeguard since many centuries. For example, in 1514, “Heinrich the Young” already had “Trabanten” to guard him. Similarly in 1578, when Duke “Erich the Young” travelled to Spain, he was accompanied by guards. Finally, in 1606 after the relief of Braunschweig, when Duke Heinrich Julius von Braunschweig disbanded his army, he kept 160 men in two companies as his bodyguard.

In 1673, during the Franco-Dutch War (1672-78), the two squadrons of the regiment joined the troops of the Duchy of Braunschweig-Lüneburg at the camp of Leese. In 1674, these troops marched to the Rhine, advancing in Palatinate and Alsace and engaging Turenne’s Army in the inconclusive Battle of Entzheim. In 1675, the regiment campaigned on the Meuse; it also took part in the siege of Trier and in the Battle of Konzer Brücke before being recalled to Hanover which was threatened by a Swedish army. In 1676, it returned to the Rhine and was at the siege of Maastricht. In 1677, it was at the siege of Charleroi and at the Battle of Saint-Denis.

In 1679, after the Treaty of Nijmegen, the troops of the Duchy of Braunschweig-Lüneburg were seriously reduced. However, the Leibgarde was increased to 120 men by the incorporation of officers and NCOs from disbanded units. In 1680, the Leibgarde was reorganised to incorporate the Osnabrück Guards, only 60 Hanoverian and 40 Osnabrück guards were kept and the rest disbanded.

In 1683, at the outbreak of the Great Turkish War (1683-99), the regiment formed part of the force sent to relieve Vienna, besieged by the Turks. It took part in the victorious Battle of Vienna and in the conquest of the fortresses of Gran, Silleck, Waitzen and Novigrad. In 1684, it participated in an action at Waitzen and in the siege of Ofen; in 1685, in the Battle of Gran and in the capture of Neuhäusel; in 1686, in the covering of the siege of Ofen.

In 1706, during the War of the Spanish Succession (1701-14), the Leibgarde incorporated the former Guards of the Duchy of Celle. On 23 May of same year, it took part in the Battle of Ramillies. In 1707 and 1708, it campaigned against the Maréchal de Villars. In 1709, it formed part of the army who passed the Rhine and tried to attack the French lines. From 1710 to 1714, the regiment campaigned on the Rhine.

At the beginning of the Seven Years' War, the unit comprised;

The successive regimental Inhabers were:

In 1763, the unit was amalgamated with the Grenadiers zu Pferde.

Throughout the war, the unit was mainly used to guard the headquarters.

On June 26 1757, during the French invasion of Hanover, the regiment took part in the Battle of Hastenbeck where it was deployed in the second line of the cavalry right wing. The cavalry was not really tested in the battle. They were superbly mounted, but drilled in the old German style tactics that meant that they were steady, but slow. They would have charged at a trot and quite likely would have received an enemy charge at the halt, trusting their firearms.

In March 1758, the regiment was at the siege and capture of Minden. On May 26, it was with Ferdinand's main force in the camp of Nottuln. On May 31, it accompanied Ferdinand in his offensive on the west bank of the Rhine. On June 23 at the Battle of Krefeld, the squadron was part of the strong Hanoverian cavalry presence on the left wing. At the opening of the battle, the unit was part of Oberg's Division ordered to make diversion towards Sankt-Tönis. In December, when the Allied army took its winter-quarters in Westphalia, the unit was quartered in Münster where Ferdinand had established his headquarters.

In June 1759, the regiment was part of the main Allied army under the command of Duke Ferdinand of Brunswick. On August 1, it was present at the Battle of Minden in the first line of the cavalry right wing, commanded by Lord Sackville whose deliberate inactivity kept the unit out of any serious action. At the end of the battle, the squadron took part in the capture of a French battery near Malbergen and drove the Touraine and Rouergue infantry brigades out of their defensive positions.

By the end of January 1760, 1 squadron of the unit was attached to the Allied army of Ferdinand of Brunswick.

On July 16 1761, the unit was at the Battle of Vellinghausen where it was part of Lieutenant-General Wutginau's Corps supporting the left wing.

On June 24 1762, the regiment fought in the Battle of Wilhelmsthal where it formed part of the 7th column. 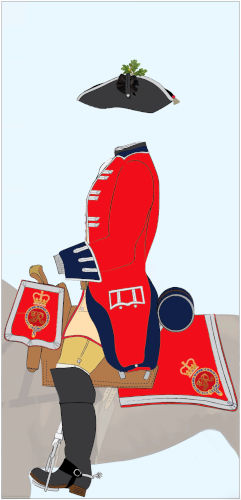 Officers wore a yellow silken sash around the waist; a silver gorget, a silver porte-epee; silver lace on the tricorne and gold lace around the collar and cuffs. They did not carry any cross-belt.

NCOs had silver laces on the cuffs, pockets, and waistcoat. They did not carry any cross-belt.

Musicians of the regiment (trumpeters and one kettle-drummer) wore the British Royal Livery. They were clothed in red, lined, faced, and lapelled on the breast with blue, and laced with the royal lace (golden braid with two thin purple central stripes). Staff trumpeter probably carried NCO distinctives.

The trumpets and kettle-drums were made of solid silver.

The apron of the kettle drums and the banners of the trumpets carried the same device as the Leibstandarte generously embroidered in silver.

According to other sources, musicians of the regiment were dressed in reverse colours and probably had swallow nests at the shoulders. 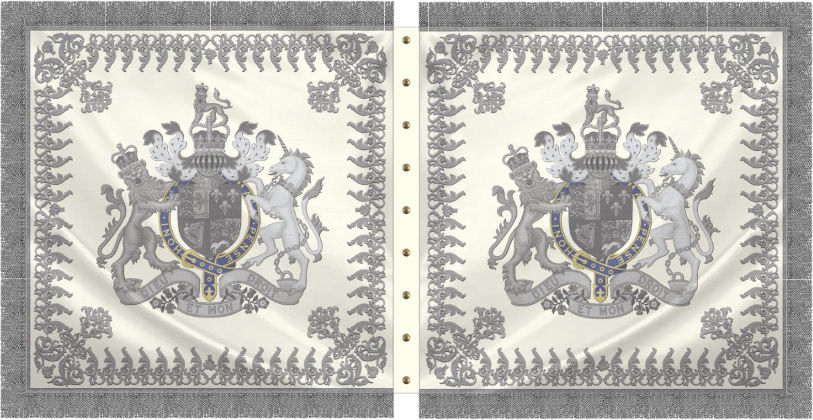 The unit had no regimental standard.