The regiment was created on September 4 1684. Indeed, expecting a Coalition to soon form against France, Louis XIV raised 30 new regiments from September 1 to 30 for the defence of the various places of the realm. By raising one regiment a day, he avoided any problem of precedence among these new regiments.

During the War of the Polish Succession, the regiment occupied Lorraine in 1733. In 1734, it was at Philippsburg.

During the War of the Austrian Succession, the regiment served in Flanders from 1742 to 1748.

During the Seven Years' War, the regiment ranked 73rd and was under the command of:

The regiment was disbanded on November 25 1762. Its grenadiers and officers were incorporated into the Grenadiers de France while its sergeants, corporals, fusiliers and drummers were offered the opportunity to serve at Saint-Domingue in the colonies by joining the Boulonnais, Foix or Quercy regiments.

In 1756, the regiment took part to the French expedition against Minorca. On April 20, it was sent ahead under the prince de Beauvau to maintain communication with an advanced party of grenadiers.

By August 1 1757, the regiment was garrisoning Toulon in Provence. 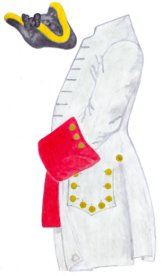