The regiment was raised in 1706 as the “G. S. Volkonskiy Dragoon Regiment”.

On March 21, 1708 since all regiments of the Russian Army gradually adopted the names of provinces or towns (where the main quarters or recruitment pool of the regiment were planned) to replace the former designation according to their chief’s name; the regiment was renamed the “Yaroslávskiy Dragoon Regiment” after the town of Yaroslavl.

On November 12, 1732, when General-Fieldmarshal Count Burkhard Christoph von Münnich reorganised the Russian field cavalry, the regiment was converted into the “3rd Cuirassier Regiment”.

From January 7, 1762 until July 15, 1762 the regiment was named “His Imperial Majesty Leib-Cuirassier Regiment”.

On the eve of the Seven Years’ War, the regiment counted 5 squadrons (10 companies for a total of about 800 men). Each company consisted of 4 officers, 5 NCOs, 2 musicians and 69 troopers. Because of recruitment difficulties, it usually fielded only 4 squadrons while the fifth served as a reserve and for replenishing the ranks of the other squadrons.

During the Seven Years' War, the successive chiefs of the regiment were:

in 1756, the regiment was stationed in Estonia and Livonia.

In July 1757, the regiment could field only 2 or 3 squadrons. It took part in the campaign in East Prussia under Field-marshal Count Apraxin. On August 30, at the Battle of Gross-Jägersdorf, it was part of the rearguard. When the Russian Army deployed, it was placed in the first line of the cavalry right wing.

In January 1758, the regiment took part in the invasion of East Prussia. At the beginning of August, it followed the Russian army in its invasion of Brandenburg. On August 25, the regiment fought at the Battle of Zorndorf where it was part of the first line of the cavalry left wing. About mid November, the regiment took its winter-quarters in Riesenburg and Saalfeld (present-day Zalewo) as part of Resanov's 2nd Division. 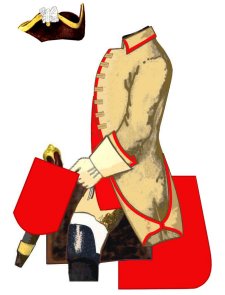 Cuirassiers still carried standards of the 1731 pattern, measuring 60 cm by 70 cm fringed in gold. The flagpole had a gilt finial.

The section on origin and history of this regiment is mainly based on two works:

Roman Shlygin for the information on the origin and history of the regiment.