The regiment was formed in 1645. It was known as the Cell'sches Reiterregiment and was the oldest regiment of the army.

In 1673, during the Franco-Dutch War (1672-78), the regiment was encamped at Leese to oppose Turenne’s Army. In 1674, it marched to Alsace where it took part in the combat of Entzheim. In 1675, it was sent to the assistance of the Prince of Orange and fought in the Battle of Konzer Brücke. It then returned home and took part in the capture of Bremen and Stade.

In 1715, the regiment formed part of the Hanoverian force who encamped near Rotenburg to protect the duchies of Bremen and Verden against Danish initiatives.

The regiment had a reputation as an 'ill-fated' unit as no fewer than three Inhabers were killed in action in the War of the Austrian Succession (Bülow, d'Acerre, and Hardenberg). A later Inhaber, Schlütter, was killed in the opening actions of the Seven Years War.

In the summer of 1757, the regiment left its quarters at Bremen and joined the Observation Army at Herford. On July 26, during the French invasion of Hanover, the regiment took part in the Battle of Hastenbeck where its two squadrons were detached from the main army and took position near Afferde along with two squadrons of the Dachenhausen Dragoons. During the battle, the squadrons were posted in a defile between Afferde and Diedersen to cover the extreme left rear of the Hanoverian positions. Ordered to counter-attack the French in Obensburg, the brigade was wildly successful as the French, in their confusion, fired on their Swiss allies thinking they were advancing Hanoverians. However, the recapture of Obensburg was short-lived as the French cavalry soon arrived and the Hanoverian cavalry withdrew covering the retreat of the rest of Cumberland's force. In this battle, the regiment lost Captain Schaden, killed. After the capitulation of the Allied army at Kloster Zeven, the regiment went to Zell.

In February 1758, during the Allied winter offensive in Western Germany, the regiment marched on Minden under the command of Major-General von Fürstenberg. After the capture of the place, it marched to the vicinity of Wesel. After the retreat of the French to the left bank of the Rhine, it took up its quarters at Horstmar and Leer in the region of Münster. On May 26, the regiment was with Ferdinand's main force in the camp of Nottuln. On May 31, it accompanied Ferdinand in his offensive on the west bank of the Rhine. On June 23, the regiment took part in the Battle of Krefeld where it was deployed in the centre as part of the brigade under Lieutenant-General Oberg. It then marched on Roermond. When the Allied army retired to the right bank of the Rhine, the regiment passed the river at Kleve. Attached to Kielmansegge's Corps, it then took position at Dülmen and Drensteinfurt but was later forced to retire to Münster. It took up its winter-quarters in Osnabrück.

At the beginning of January 1759, the regiment came out of Münster and joined the troops who formed a cordon near Lette. At the end of May, the regiment joined Wangenheim’s Corps which was encamped at Halteren. In June, this corps took position at Dülmen in Westphalia to observe the movement of a French corps under the Marquis d'Armentières. On August 1, the regiment took part in the Battle of Minden where it was deployed in Wangenheim's Corps between Kutenhausen and the Weser, in the second line of the cavalry right wing under Major-General von Grothausen. In this battle, the regiment lost Lieutenant Winter, killed. It pursued the French in the countries of Detmold and Paderborn and encamped at Hermanstein near Wetzlar where it remained until November 27. It then took up cantons near Werdorf.

In January 1761, the regiment formed part of the corps of General von Kielmansegge who made an expedition against Duderstadt. In February, the regiment marched marched on Mühlhausen with Spörcken’s Corps. In this expedition, the Allies captures 5 officers and 100 men. On February 15, the regiment marched to Schlotheim. On February 15, it was among the Allied forces who launched a surprise attack on Langensalza against the Saxon Contingent fighting along the French Army. At the beginning of April, the regiment took up up cantonment in Polle. At the end of May, it joined Spörcken’s Corps at the camp of Marburg where it remained until June 29. On July 16, the regiment was posted at Herzfeld on the left bank of the Lippe with part of Spörcken's Corps. It did not take part in the Battle of Vellinghausen. The regiment later served under General von Luckner on the Diemel and the Weser. In October, the regiment joined the corps of the Hereditary Prince of Brunswick who operated in the neighbourhood of Einbeck and Northeim. The regiment took up its winter-quarters in Rute in the region of Hildesheim.

By May 23 1762, in preparation for the campaign in Western Germany, the regiment was attached to the Allied main army. On June 24, it took part in the Battle of Wilhelmsthal where it was deployed in the 7th column. On July 23, the regiment took part in the Combat of Lutterberg, another attempt against the Saxon Contingent. It later took part in the siege of Cassel. It then took up cantonments in the region of Hildesheim. But, around Christmas, it was transferred to the Hanoverian towns of Ricklingen and Neustadt.

In April 1763, the regiment returned to its traditional garrison place at Bremen. 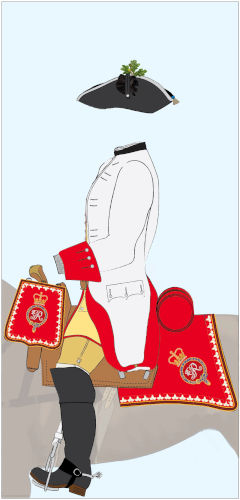 Officers wore a yellow silken sash across the right shoulder; a silver gorget, a silver porte-epee; silver lace on the tricorne. They did not carry any cross-belt.

NCOs had silver laces on the cuffs, pockets and waistcoat. They did not carry any cross-belt.

The musicians were kettle-drummers and trumpeters. They were probably dressed in reverse colours; staff trumpeter probably carried NCO distinctives.

The kettle-drum apron and trumpet banners were red, fringed gold, carrying the Arms of England; the motto “DIEU ET MON DROIT” underneath

The regiment carried one Leibstandarte and one regimental standard. Generally speaking, the textual descriptions that we have found for the Hanoverian cavalry standards were very simple and we had to guess the complete designs. The obverse of the Leibstandarte of the present regiment is a good example: the description only mentions the arms of England within the Garter without specifying the presence of the crown or of the supporting lion and unicorn. In our version, we assumed that all these items were present. 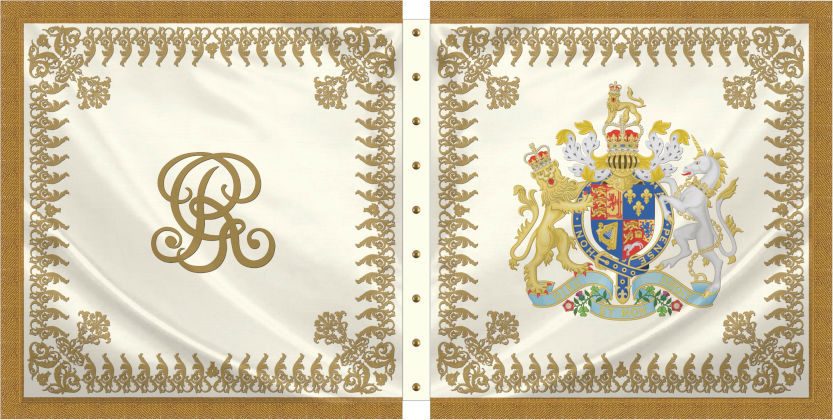 This standard kept at the Hannover Historisches Museum (inventory number VM 16996) measures 42 cm high and 42 cm wide. Its flagpole has a length of 266 cm. 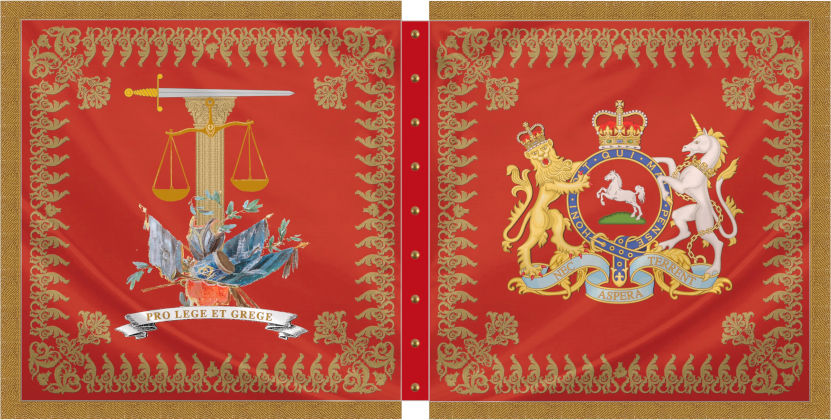