This third guard regiment was raised by Empress Anna and placed under the command of von Löwenwald. Its troopers mostly came from Ukraine, Estonia and Courland.

At the beginning of the Seven Years War, the regiment counted 3 battalions. Each of these battalion consisted of:

In 1757 3 sergeants, 15 captains, 12 NCOs of the regiment volunteered to join Schuvalov’s Observation Corps. They were all promoted upon incorporation in this corps. 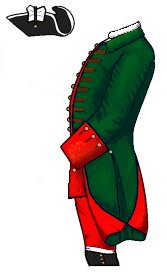 Officers had a red leather cover to protect and decorate the patronna sumka. 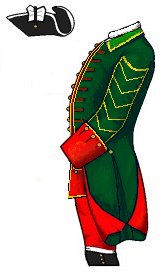 Izmailovskiy Guard Fifer Uniform in 1757 - Source: rf-figuren from a Not By Appointment template 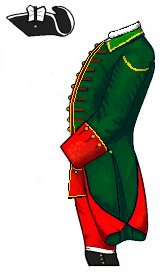 Izmailovskiy Guard Drummer Uniform in 1757 - Source: rf-figuren from a Not By Appointment template

Important notice: Even though our illustrations depict yellow laces, the colour of the braids on the uniforms of the musicians were chosen by the colonel. For instance, it could have been the distinctive colour of the regiment (green for Semenovskiy). They were often decorated with red “XXXX” in the middle.

The flags measured 1,62 m. x 2,66 m., with a gold finial and silver cords and tassels. The flags were fringed in gold and mounted on a 3,35 m. red wooden pole. The three Guard regiments had flags of similar design. However, the distinctive colour of each regiment (green in the case of Semenovskiy) was used on the outer border and the part wrapped around the flagpole.