The regiment was raised around 1648. In 1680, it was renamed Jämtlands dragonregemente, a curious denomination since it always acted as an infantry regiment.

In the homeland guarding the Jämtland border with Norway. In 1704 150 men were taken for the Livgardet. With Armfeldt in the Trondhjem campaign of 1718.

The regiment consisted of a 8 companies of dismounted dragoons totalling 1,048 men.

During the Seven Years' War, the regiment did not take part in the various campaigns in Pomerania. It remained in Sweden. 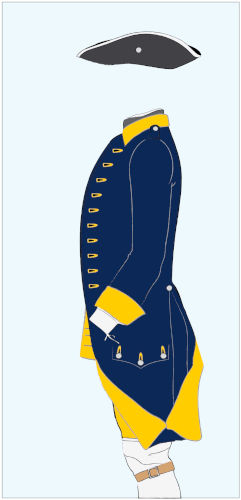 Musicians wore uniforms similar to those of privates with the following differences:

Liffana (colonel flag): white field; centre device carried the crowned royal arms of Sweden flanked by 2 crowned golden lions; the outer corner of the first canton carried a white moose with an eagle on its back and a wolf leaping at its throat.

Kompanifana (ordonnance flag): blue field; centre device consisting of a white moose (silver as per Clifford) with an eagle on its back and a wolf leaping at its throat.