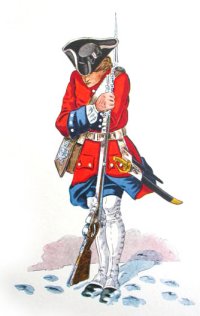 Up to the reign of Louis XIV, to the exception of the Gardes Suisses, no Swiss regiment had been maintained on a permanent basis in the French Army. They usually served for four years before being sent back home and replaced by new units. In 1671, Louis XIV charged Pierre Stuppa, a captain in his Gardes Suisses, to negotiate with the Swiss Cantons the creation and cession of four regiments. Contracts were signed on August 14 of the same year. The four regiment arrived in France at the beginning of 1672 and were admitted in the French service on February 17. The present regiment (12 companies of 200 men each) had been raised in Berne and was always composed of inhabitants of this city.

In 1684, the regiment served at the siege of Luxembourg.

In 1688, at the outbreak of the Nine Years' War (1688-97), the regiment returned to Roussillon. In 1689, it took part in the capture and defence of Campredon. In 1690, a detachment of grenadiers of the regiment defeated a party of migueletes near Loscot. In 1691, the entire regiment took part in the storming of Seu d’Urgell; in 1693, in the capture of Roses; in 1694, in the Battle of Torroella and in the sieges of Palamos, Girona, Ostalrich and Castelfollit. In 1695, one battalion occupied Ostalrich while the two others relieved Castelfollit. In 1697, the entire regiment took part in the siege of Barcelona.

In 1715, the regiment was reduced from three to two battalions.

On November 10, 1733, at the beginning of the War of the Polish Succession (1733-35), the regiment was re-established at three battalions, left his garrison place at Givet and joined the Army of the Rhine. In 1735, it took part in the Combat of Klausen.

On January 8, 1737, the regiment, then stationed in Metz, was once more reduced to two battalions.

In 1742, during the War of the Austrian Succession (1740-48), the regiment initially served at Dunkerque before being transferred to Douai. In 1743, it remained at Douai. On September 22 of the same year, it was increased to three battalions, the new battalion being stationed in Aire. In 1744, the entire regiment was sent to Courtrai but was later sent to Menin and Ypres. In 1745, one battalion remained in Maubeuge while the two others were sent to the siege of Tournai and then took part in the Battle of Fontenoy and in the sieges of Oudenarde, Ostend, Nieuport and Ath where they were rejoined bu the third battalion. In 1746, the regiment participated in the sieges of Bruxelles, Antwerp and Namur and in the Battle of Rocoux; in 1747, in the Battle of Lauffeld and in the conquest of Dutch Flanders. In this campaign, the regiment suffered heavy losses and was sent back to Normandie. In 1748, it campaigned on the coast of Bretagne. Two battalions remained at Landerneau till the end of the war while the 2nd Battalion was stationed at Bellisle.

On the eve of the Seven Years’ War, the regiment counted three battalions and had prévôté (provostship).

During the Seven Years' War, the regiment ranked 49th and was under the command of:

On April 1, 1756, the regiment was reduced once more to two battalions. In October, it was selected to form part of the 20 battalions that Louis XV planned to send to the relief of Austria.

In 1757, the regiment was sent to Germany. By August 1, it had joined Army of the Lower Rhine. It then took part in the conquest of Hanover. At the end of the year, it took its winter-quarters in Germany, in the first line of the French army at Essel, Bothmer and Schwarnstedt on the Aller River.

In February 1758, when Ferdinand of Brunswick launched his offensive in Western Germany, the regiment retired on the Rhine with the rest of the French army. From March 30 to April 4, it was in the first line of Clermont's Army in the camp of Wesel on the Lower Rhine. In April, when Clermont redeployed his army along the Rhine, the regiment was stationed in Fischeln and Osterath near Krefeld. On May 31, when Ferdinand successfully crossed the Rhine with his army, the regiment had already left the Lower Rhine theatre of operation and was on its way to Hesse to reinforce Soubise's Army. By August 20, the regiment was still operating as part of an independent detachment with Reding Infanterie and Lochmann Infanterie under Lieutenant-Colonel La Chennelas.

At the end of May 1759, when the French Army of the Rhine launched its offensive in Western Germany, the regiment remained on the Rhine as part of the corps of the Marquis d'Armentières. It took part in the unsuccessful siege of Münster where its colonel was wounded and its lieutenant-colonel (La Chennelas) killed. By October 25, still attached to d'Armentières's Corps, the regiment was at the main camp at Bochum. Around December 29, an Allied party under Scheiter passed the Rhine and captured the baggage of the regiment.

By May 23 1760, the regiment was part of the Reserve of the second line of Broglie's Army, placed under the command of M. d'Auvet. On June 15, Saint-Germain had assembled the Army of the Lower Rhine near Düsseldorf, the regiment was part of d'Auvet's Division who was sent to the right bank of the Rhine along with his 2 artillery brigades and 15 pontoons. On July 4, still part of d'Auvet's Division, it reconnoitred the area of Arnsberg. On July 31, the regiment took part in the Battle of Warburg where it was deployed in the first line of the left wing. In this battle, Colonel Jenner was wounded once more. By December 30, the regiment had taken its winter-quarters in Butzbach.

On July 16, 1761, the regiment was at the Battle of Vellinghausen and then formed part of a detachment who advanced into Hanover. After this expedition, it took up its winter-quarters at Geldern.

In 1762, the regiment left Geldern and returned to Strasbourg in France.

The uniform of the regiment seems to have been slightly modified in 1758. Differences are noted in the following table. 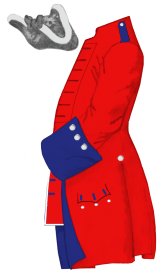 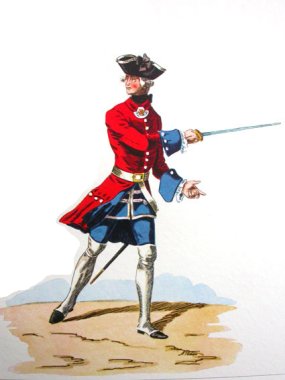 Sergeants have silver laces on their coat, waistcoat and cuffs.

The regiment changed uniforms at the end of the war. This change might have corresponded with the regiment becoming Erlach Infanterie in 1762. Here are illustrations of an officer, a drum major and a drummer from 1762 to 1782.