José I (aka Joseph I) 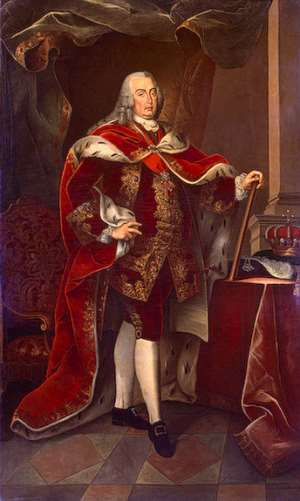 José I, King of Portugal - Painting by Miguel António do Amaral circa 1773 - Source: Wikipedia

José was the third child of King John V of Portugal and his wife Archduchess Maria Anna of Austria. José had an older brother, Peter (but he died at the age of two), an older sister and three younger brothers.

At the death of his elder brother, on October 29 1714, José became Prince of Brazil as the heir-apparent of the king, and Duke of Braganza.

On 19 January 1729, José married a Spanish Infanta, Mariana Victoria de Bourbon of Spain, daughter of Philip V of Spain and Elisabeth Farnese, and his elder sister Barbara of Portugal married the future Ferdinand VI of Spain. José and Mariana Victoria had four daughters, two stillborn sons, one stillborn daughter and a miscarriage in 1750.

On July 31 1750, José became king of Portugal and the Algarves. He almost immediately placed effective power in the hands of Sebastião José de Carvalho e Melo (aka the Marquis of Pombal). King José I also declared his eldest daughter Maria Francisca as the official heiress of the throne, and proclaimed her Princess of Brazil.

After the great Lisbon earthquake of November 1 1755, in which around 100,000 people died, King José developed a severe case of claustrophobia and he was never again comfortable living within a walled building. Consequently, he moved the royal court to an extensive complex of tents in the hills of Ajuda.

On September 3 1758, a conspiracy of nobles aimed at murdering King José I and the marquis gave Pombal the opportunity to get rid of the Távora family and to expel the Jesuits, thus gaining control of public education and a wealth of church lands.

During the Seven Years' War, Portugal was finally drawn into the conflict in 1762 when Spain attacked Portugal. The Spaniards were supported by France while Portugal received troops from Great Britain.

Most of the text of this article is taken from the following articles of Wikipedia: