The regiment was raised in Upper Hungary (present-day Slovakia). Colonel Thomas Szirmay received the necessary warrant on October 21 1741. By mid-1742, three battalions had already been enlisted. They assembled at Leutschau (present-day Levoča/SK) and Eperies (present-day Prešov/SK). One battalion and the staff were then stationed in Brünn (present-day Brno/CZ), and two in Olmütz (present-day Olomouc/CZ).

In 1742, during the War of the Austrian Succession (1740-48), the regiment had barely been trained a few weeks in Olmütz and Brünn before it had to leave Moravia on July 18, and join FML Festetić’s Corps to take part in the relief of Prague. On August 22, it distinguished itself in the attack against French troops occupying the outskirts of Prague. On July 8 1743, Colonel Szirmay died in Amberg. On May 12 1744, Colonel Joseph Count Esterházy was appointed colonel of the vacant regiment. The regiment was then sent to the Rhine and passed the river on July 1, along with Forgách Infantry. On July 31, the regiment took part in the storming of Saverne in France. On August 23, it was at the combat of Suffelheim. It then returned to Bohemia and garrisoned Ratibor in Silesia during the following winter. In 1745, the regiment took part in the campaign in Bohemia and Silesia. On May 26, 200 men led by Major Szentiványi took part in the storming of the Fortress of Cosel. From 1746 to 1748, the regiment took part in all campaigns in Italy. On June 16 1746, it fought in the Battle of Piacenza and later participated in a raid in Provence.

After the signature of a peace agreement, the regiment assumed garrison duty from January 1749. The staff and 11 companies were posted at Olmütz (present-day Olomouc/CZ), 3 companies at Ungarisch Gradisch (present-day Uherské Hradiště/CZ). Meanwhile, the 4th Battalion was posted at Kaschau (present-day Košice/SK). In August and September 1749, two battalions took part in the great manoeuvres at Bisentz (present-day Bzenec/CZ). The 3rd Field Battalion then garrisoned several places in Moravia until 1755.

During the Seven Years' War, the owners of the regiment were:

Regimental numbers were introduced only in 1769 when this regiment was designated as "I.R. 37". 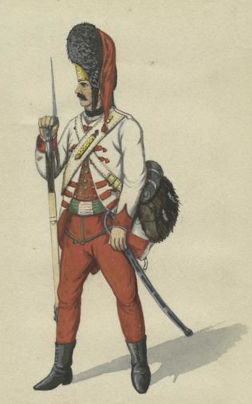 On October 1 1756, the regiment took part in the Battle of Lobositz where it was deployed in the second line of the centre under General C. Kollowrat in the brigade of Major-General Krottendorf. Along with Jung-Wolfenbüttel Infantry and Hildburghausen Infantry, it defended the town of Lobositz and lost 36 men killed (including Colonel Szentiványi), 176 wounded and 80 missing.

By August 2 1758, the regiment served in the second line of the Austrian Main Army under the command of Daun near Jarmeritz (present-day Jaroměřice nad Rokytnou). Daun was following up the Prussian army retiring through Bohemia after the failure of the invasion of Moravia. On October 10, two battalions of the regiment took part in the Battle of Hochkirch where they were deployed in the vanguard of the right column of Daun's main army directly south of Hochkirch. During the attack on the Prussian battery on their right wing, Lieutenant-Colonel Johann Karl von Öhrling and 18 men were killed, 10 officers and 93 men wounded, and 182 men went missing.

On October 1 1761, one battalion of the regiment took part in the storming of Schweidnitz where it was attached to the fourth column under Lieutenant-Colonel Baron de Vins. In the fight, Major Stephan Szemere and 47 men were killed, and 108 officers and men wounded. Captain Johann Nepomuk Count Drašković (son of General Joseph Kazimir Count Drašković) was buried by the explosion of the powder magazine. His father had him transported to the army staff where one of the best surgeons took care of him. Afterwards, he recovered in the Drašković’s estates in Croatia.

In April 1763, after the signature of the Treaty of Hubertusburg, the regiment was reviewed in Brünn (present-day Brno/CZ) and spent the next years in various Moravian garrisons.

The Bautzener Bilderhandschrift of 1762 depicts a tricorne without tassels and with a red within white pompom; a white and red barrel sash.

Donath and Schirmer describe a red shoulder strap, and a white and dark green barrel sash. Furthermore, Donath illustrates a “v” shaped lace on the trousers. 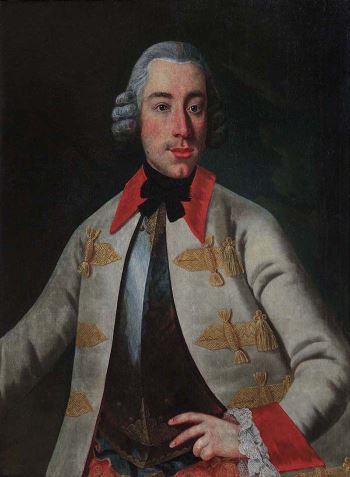 On this portrait of Lieutenant-Colonel Ferdinand von Ujházy, we can clearly see that, by 1750:

As per the Bautzener Bilderhandschrift, the senior officers wore a uniform similar to those of privates with the following differences: 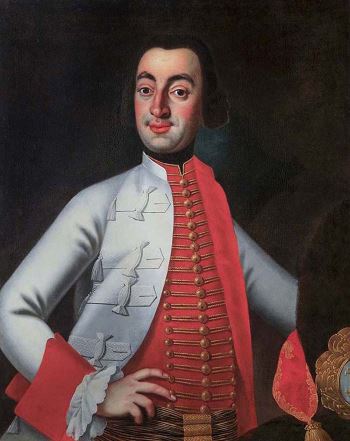 Portrait of an unidentified grenadier officer of the "Prima Plana" circa 1750 – Source: Collection of Trakoščan Castle (Croatia), picture made available by Mr. I. Mravlinčić - Copyright Trakoščan Castle

On this portrait of a grenadier officer we can clearly see that, by 1750: 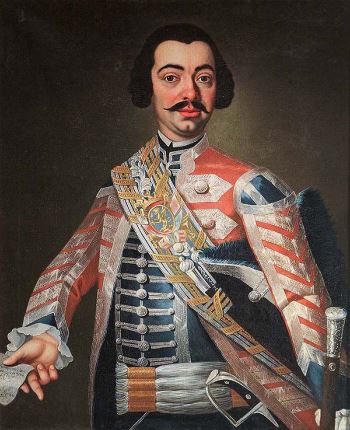 The accompanying portrait depicts Drum Major Gabriel Rothanides of the regiment circa 1750, prior to the new regulation issued in 1755.

Drummers played a rather important role in the regiment. They were responsible for the regimental chapel and trainees set the pace during tattoos and on other occasions. During war, drummers were also used as parliamentary when negotiating with the enemy.

As per a regulation of 1755, musicians were now distinguished from rank and file only by red swallow nests on the shoulders.

Harald Skala for the translation and integration of Finke's work and for additional info on uniforms of officers, NCOs and musicians