In 1665, Count Georg Friedrich von Waldeck concluded a defensive alliance between the Dutch Republic, Duke Ernst August and Georg Wilhelm zu Nienburg where the two Houses of Lüneburg agreed to increase their army. Accordingly, the same year, a new regiment of 12 companies was raised in Osnabrück by Lieutenant-Colonel Verkel. Soon afterwards, two additional companies were enlisted and two other companies ceded to form the kernel of other regiments.

On 9 October 1665, the new regiment was part of the Hanoverian and Celler contingents taken in Dutch pay. The contingent assembled on the Weser. In 1666, it campaigned against the French in Brabant. In 1669, it returned to Osnabrück.

In 1688, the regiment returned to Hanover where it was redirected on Holstein to quench troubles.

In 1689, during the Nine Years' War (1688-97), the regiment campaigned on the Rhine, taking part in the capture of Mainz. In 1690, it was transferred to Brabant but returned to Hanover in the autumn. In 1693, the regiment was once more sent to Brabant where it took part in the Battle of Landen. In 1695, it participated in the siege and capture of Namur.

In 1697, the regiment returned to Hanover where it was reduced to 11 companies.

In 1714, the regiment returned to Hanover.

In 1738, 400 men of the battalion took part in operations against the Danes.

In September 1742, during the War of the Austrian Succession (1740-48), the regiment was sent to the Netherlands. In 1743, it fought in the Battle of Dettingen. In 1745, it campaigned in Brabant. In 1746, it took part in the Battle of Rocoux; and in 1747, in the Battle of Lauffeld. In 1748, it returned to Hanover where it was placed in garrison in Einbeck and other neighbouring towns.

In 1753, the regiment was transferred to Gifhorn.

On May 2, 1756, the regiment set off from Gifhorn and marched towards Stade. On May 11, George II sent a message to both houses of the Parliament to request funding for the defence of the country. The Parliament granted him one million pounds. The Hanoverian contingent consisted of 12 battalions (including the present regiment) and 5 artillery companies. On May 12, the regiment embarked on board transport ships. On May 16, a fleet of 21 British transports sailed from Stade for the reinforcement of Great Britain. On May 22, the Hanoverian contingent disembarked in England and the regiment marched to Canterbury. On August 4, it was transferred to a newly formed camp at Coxheath near Maidstone. At the beginning of November, it became clear that Brunswick-Lüneburg (aka Hanover) was more seriously threatened than England and it was decided to gradually send the Hanoverian contingent back to the continent. On November 13, the regiment took up its winter-quarters in Maidstone. Bad weather then postponed its departure till the end of February 1757.

On February 24, 1757, the regiment re-embarked On March 2, it landed at Cuxhaven in Lower-Saxony. On March 19, it returned to Gifhorn, its former garrison place. On April 21, the regiment joined the allied army assembling at Hameln to put a stop to the French invasion of Hanover. On July 26, the regiment took part in the Battle of Hastenbeck where it was deployed in the first line of the right wing under the command of General Block. In this battle, the regiment lost Grenadier-Lieutenant von Wickede who was wounded. After the defeat, the regiment followed the allied army in its retreat towards Verden and Stade. On November 26, during the Allied counter-offensive in Hanover, it was allocated to a corps under Major-General von Diepenbroick who marched on Bremen.

On February 17, 1758, during the Allied winter offensive in western Germany, the regiment was once more attached to Diepenbroick’s Division and captured Bremen on February 24. In March, the regiment took part in the siege and capture of Minden. By May 26, the regiment was with Ferdinand's main force in the camp of Nottuln. On May 31, it accompanied Ferdinand in his offensive on the west bank of the Rhine. On June 23, the regiment took part in the Battle of Krefeld where it was deployed on the left wing under the command of Lieutenant-general von Spörcken. In this battle, the regiment lost Captain Kortrey, killed. On October 10, the regiment fought in the Battle of Lutterberg where it was placed in the first line of the centre. On November 22, it took up its winter-quarters in the region of Osnabrück.

On February 1, 1759, the regiment was posted in the area of Werne. In June, it was part of Wangenheim's Corps who had taken position at Dülmen in Westphalia to observe the movement of a French Corps under the Marquis d'Armentières. On August 1, the regiment took part in the Battle of Minden where it was deployed in Wangenheim's Corps between Kutenhausen and the Weser, in the first line of the infantry centre. It contributed to the assault the village of Totenhausen on the right flank.

By May 23 1762, the regiment might have been attached to the main Allied army (not sure if it was this regiment or Alt Zastrow) where it would have formed part of Major-General von Bock's Brigade. On June 24, during the campaign in Western Germany, the regiment fought in the Battle of Wilhelmsthal. In November, the regiment returned to Hanover where it was placed in garrison at Ratzeburg. 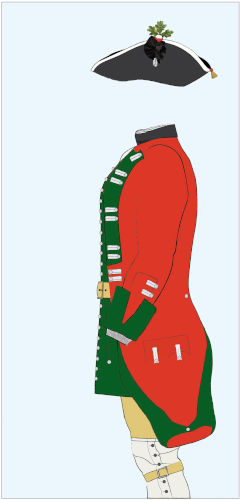 The drum pattern had hoops in alternating dark green and red diagonal stripes, white drum cords over a brass drum with the Arms of Hanover in the centre.

Regimental Colour: dark green field; centre device consisting of an old scroll reading JEHOVA on clouds, the whole surrounded by a trophy of arms; under the centre device, a scroll carrying the motto QUIS CONTRA NOS. 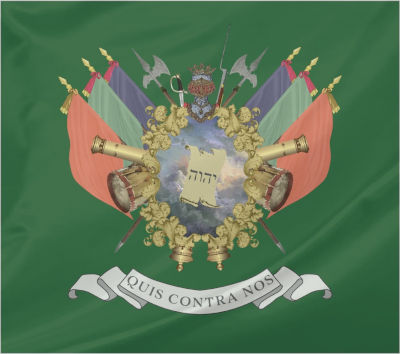