In the first years of the War of the Austrian Succession, Hungary promised to raise 6 infantry and 3 hussar regiments. Similarly Siebenbürgen (present-day Transylvania) offered to raise a hussar regiments of 1,000 men. The relevant decree was issued on April 17 1742. Colonel Anton Count Kálnoky was appointed commander (not proprietor) of the regiment. Count Kálnoky had been previously serving as lieutenant-colonel in Pestvárgemy Hussars. Kálnoky was received in audience by Maria Theresa in Vienna. He then set off for Transylvania where he found a very bad situation, plague being in the country. Recruitment took a long time.

In 1744, the regiment was instructed to rejoin the main army at Heilbronn. On May 27, it arrived at Sontheim (60 hussars were left behind at Alt Breisach). At the end of May, Nádasdy at the head of 4 hussar regiments (including Kálnoky Hussars) and the Pandours went to the Rhine River to reconnoitre the situation. On June 13, Nádasdy with 100 Kálnoky Hussars, 100 Ghilányi Hussars and 200 Warasdiner Grenzers attacked the garrison of Huttenheim (Hessian and Bavarian troops), stormed an entrenchment and took the garrison prisoners. On July 2, the Pandours attacked a Bavarian detachment near Kuhardt. The Bavarians received support of some French troops and only the furious attack of the entire Kálnoky Hussars avoided the destruction of the Pandour regiment. When Frederick II invaded Bohemia, the Austrian army was forced to immediately return to Bohemia. On August 23, the Austrian army repassed the Rhine. On August 25, three hussar regiments (including Kálnoky Hussars) were sent forward as vanguard. They marched by Mühlburg, Neresheim and Waldmünchen. On October 1, they arrived at Mirotitz (present-day Mirotice/CZ) where they rejoined the main army. Then 100 hussars were sent to the Pandour Corps of Franz von der Trenck, operating around Prague. At the end of October, the regiment (now in Nádasdy's Corps) attacked a Prussian supply convoy, capturing all wagons, 60 horses and, the next day, the quartermaster of the Prussian army: Lieutenant-Colonel von Arnstein. At the beginning of December the regiment took its winter-quarters at Tannenberg (present-day Jodlow/PL).

On January 25 1745, the regiment was sent to Römerstadt (present-day Rýmařov/CZ). The regiment with Beleznay Hussars was directed to join the Hungarian Insurrection troops in Silesia under FM Esterházy. By February, 4 coys (some 200 men) were at Freudenthal (present-day Bruntál/CZ) and 6 coys at Hof. In March, the regiment was deployed near Troppau (present-day Opava/CZ). On May 4, a patrol of Kálnoky hussars spotted a Prussian convoy of 400 wagons supported by 2,000 foot. The hussars followed the convoy up to Mochbern in the suburbs of Breslau (present-day Wroclaw/PL), skirmishing with the escort. Meanwhile, they were joined by Colonel Buccow with the Pandours. They then attacked the convoy. When the Prussians finally received some support, the Austrians retired. In this action they captured some 100 wagons, 262 horses and a number of oxen. Erdödy Hussars and Kálnoky Hussars later supported Insurrection infantry in a fight against Prussian troops under General Schwerin near Jägerndorf (present-day Krnov/CZ). During Autumn, most of the Insurrection troops returned to Hungary. On November 11, Count Kálnoky was promoted to major-general, the new commander of the regiment was Colonel Wolfgang Makhászy (sometimes written Macskassy). The regiment took its winter-quarters around Sternberg (present-day Moravský Šternberk/CZ).

At the end of May 1746, an Austrian corps (including Kálnoky Hussars) was sent to the Netherlands to support the “Pragmatic army”. On July 23, the first column (Kálnoky Hussars, Beleznay Hussars and Nádasdy Hussars) under Major-General Duke Esterházy arrived at Peer (near Maastricht/NL) and was directed to the corps of FML Trips. On August 2, these hussars took part in a first fight near Namur, killing nearly 800 Austrian deserters serving in a French corps of pandours and hussars. On October 11, these hussar regiments took part in the Battle of Rocoux but were not directly involved in any combat, being deployed in the second line of the left wing. The regiment spent winter near Rheydt and Ödenkirchen, to the north-west of Colonia in Germany.

In 1747, along with Esterházy Hussars and Nádasdy Hussars, the regiment formed the vanguard of Trips' Corps and campaigned in the Netherlands once more. On May 10, Colonel Macskassy at the head of 6 coys of his regiment and some grenadiers and Pandours attacked the French near Mechelen. The French were defeated, throwing away their weapons, they took refuge behind the walls of Mechelen. In this action, the French lost 100 men, 1 officer and 21 men taken prisoners. At the beginning of November, the regiment took its winter-quarters near Essen in Germany. By then, the regiment counted 11 coys for a total of 32 officers, 7 aggregiert and 886 men.

In 1748, the regiment did not take part in any major action. In November, all Austrian troops returned home. The regiment marched towards Transylvania and arrived Thorda where, on December 27, it was reviewed.

On May 10 1749, Count Kálnoky was appointed proprietor of the regiment.

In 1752, Colonel Macskassy retired and was replaced by Colonel Csedö who died in 1753. Baron Josef Jósika de Branyicska then assumed command of the regiment.

From its creation, the regiment was under the nominal command of:

From its creation, the regiment was under the effective command of:

In 1798, the regiment was designated as the Husaren Regiment Nr. 2.

In June 1756, at the beginning of the Seven Years' War, the regiment was stationed in Hungary and counted 559 men and 255 horses. During the winter of 1756-57, the regiment received a sixth squadron.

On March 2 1757, the regiment (702 men) left Thorda. On April 15, it arrived at Bärn (present-day Moravský Beroun/CZ). On May 19, as part of Major-General Morocz's vanguard, the regiment arrived at the camp of the main army at Kuttenberg (present-day Kutná Hora/CZ). On June 18 1757, the regiment took part in the Battle of Kolin where it was deployed in the first line of the extreme right wing in Hadik's division. After the victory, Morocz followed the Prussian Army during its retreat towards Silesia. On September 7, when General Nádasdy attacked the isolated corps of Winterfeldt in the Combat of Moys, the regiment was part of the vanguard in front of the right wing under the command of Lieutenant-General Kálnoky whose brigade supported Grenzer troops. When the main Austrian army marched towards Breslau, a corps under FZM Marschall (11 grenadier coys, 6 cavalry regiments including Kálnoky Hussars) remained in the region of Lauban (present-day Luban/PL) . During G.d.C. Hadik's raid on Berlin, Marschall's Corps was sent to Bautzen in Saxony. On November 14, it was at Löbau; on November 24, at Grottau (present-day Hrádek nad Nisou/CZ). Marschall's Corps was later recalled to Bohemia where it arrived on December 11, taking its winter-quarters near Melnik (present-day Mělník/CZ).

In 1758, Colonel Josef Count Bethlen was appointed new commander of the regiment which was posted near Trautenau (present-day Trutnov/CZ). It remained in this region for the whole year, distinguishing itself in several skirmishes among which engagements near Landeshut and Königrätz. It took its winter-quarters in and around Rumburg (present-day Rumburk/CZ).

By March 1759, the regiment was part of FML Beck's Corps posted near Landeshut (present-day Kamenia Gora/PL) in Silesia and was involved in “Klein Krieg” (guerilla warfare), taking part in engagements at Greifenberg and Liebau. In July, Count Bethlen was appointed general and Colonel Georg von Simonyi succeeded him as commander of the regiment. At the end of July, the regiment was part of a corps of 24,000 men placed under the command of FML Loudon by Field-Marshal Daun. Loudon was instructed to make a junction with the Russian army. On August 12, the regiment fought in the Battle of Kunersdorf where it was deployed in the reserve of the left wing as part of Loudon's cavalry corps. The regiment was not directly involved during the battle but, along with Nádasdy Hussars, it pursued the retreating Prussians and captured 100 men and 2 guns. After the battle, each men of Loudon's Corps received one ruble from Empress Elizabeth. Loudon then returned with his corps through Silesia to the Moravian border. The regiment took its winter-quarters near Freudenthal (present-day Bruntál/CZ).

In 1760, the regiment served in Silesia for the whole year. In March, it took part in an engagement near Schlesisch-Neustadt. In early June 1760, it formed part of Loudon's Army of Silesia where it was deployed in Drašković's Corps in Upper-Silesia. While Loudon was besieging Landeshut (present-day Kamenia Gora/PL), he sent Major-General Bethlen with Kálnoky Hussars, 1 sqn of chevaux-legers and 1 bn of Grenzer to reconnoitre the fortress of Neisse (present-day Nysa/PL). In July, the regiment was present at the Siege of Glatz. On July 26, the fortress surrendered and 100 men of Kálnoky Hussars remained in the fortress as garrison. On September 30, the regiment formed part of a detachment (Kálnoky Hussars and 200 men of Löwenstein Dragoons) under Major-General Bethlen. This detachment took part in a bloody engagement at Lindewiese against a Prussian force under General Neuwied (Krockow Dragoons, 2 sqns of Alt Platen Dragoons, 4 hussar sqns of various regiments and some infantry). In this action, the regiment lost 19 men dead, 25 men wounded and 7 captured taken prisoners. On November 20, the regiment took its winter-quarters around Hotzenplotz (present day Osoblaha/CZ).

At the beginning of 1763, the regiment marched back to Transylvania, arriving at Deva on June 6 where it assumed garrison duty.

The 1757 reform, stated that all hussar regiments should be dressed in dark blue uniform with yellow distinctives. However, this regulation seems to have been followed only by Kaiser Franz I Hussars. The present regiment retained its former uniform. 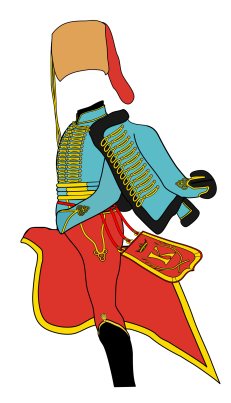 Troopers were armed with a short, curved sabre, a musket and two pistols.

As per the Bautzener Bilderhandschrift, officers wore a uniform very similar to the uniform of the troopers with the following differences:

As per Knötel, trumpeters wore a uniform similar to those of the regular cavalry:

The regiment received guidons, trumpet and kettle drum banners. These showed the crest of Siebenbürgen, with the red-white-red Austrian badge in the heart shield. The standards were also decorated with the motto on scrolls: “MARIA. TH(e)RES(ia). R(egina). H(ungariae). B(ohemiae). A(rchiducissa). PRINC(eps). TRANSIL(vaniae)”.

Digby Smith for the initial version of this article, Harald Skala for additional information on origin and history and User:Zahn for information on the uniform