This regiment was raised in 1703 as the “Flemming-Kürassiere”.

According to the 1753 État, during peacetime each cuirassier regiment counted 8 companies in 4 squadrons for a total of 514 men and 394 horses.

In 1756, after the surrender of the Saxon Army at Pirna, the entire regiment was distributed among the Prussian cavalry.

At the end of August 1756, when Frederick II invaded Saxony, the regiment retired to Pirna with the rest of the Saxon army. At Pirna, the regiment was deployed on the right wing under von Arnim, as part of von Reitzenstein's Brigade. The Prussians blockaded the Saxon army in Pirna from September 9 until October 15 when the Saxons finally had to surrender. The entire regiment was then distributed among the Prussian cavalry. 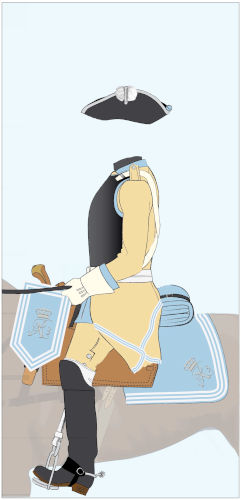 Leibstandarte: white damask field heavily embroidered in gold with silver piping, centre device consisting of a gold shield of ornate design carrying the Royal Polish arms (white eagles and white knights on a red field) and on the centre the arms of Saxony beneath the electoral hat, surmounted by a crimson royal crown and surrounded by green palm leaves. Fringe in silver (buttons color) and light blue (distinctive color = bleu mourant).