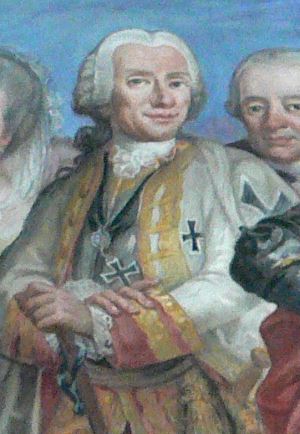 Portrait of Christian Moritz Count Königsegg-Rothenfels – Source: painting of Königsegg as Landkomtur of Altshausen by Andreas Brugger on the ceiling of the church of Wurzach in 1777

Until 1804, the County of Königsegg-Rothenfels was independent (Reichsunmittelbar) from the Holy Roman Empire. The name of the county came from Castle Rothenfels near Immenstadt in Allgäu.

The family of Christian Moritz originally used the name “Fronhofen” from Castle Fronhofen near Ravensburg. In 1251, Eberhard used the name “Kunigsegge” from a castle that he owned. In 1565, Johann Jacob von Königsegg bought the County of Rothenfels with Immenstadt as its main town. On July 29 1629, Hugo von Königsegg-Rothenfels was promoted to count by Emperor Ferdinand II.

As young man, Christian Moritz took military service in the regiment of his uncle Field Marshal Lothar Joseph von Königsegg-Rothenfels (later on IR Nr. 54). In his regimental history published 1894 in Olmütz, V. Neuwirth writes that Christian Moritz Count Königsegg first joined the regiment in November 1726 with the rank of lieutenant-colonel. It is not mentioned, that he was transferred from another regiment. In 1726 Christian Moritz was only 21 years old, probably he bought the rank and got the function due to his kinship with the regiment proprietor. In these days, Colonel Kaczianer was commander of the regiment which was stationed in Italy where it remained until 1728.

In 1733, during the War of the Polish Succession, the regiment was transferred to Silesia where it was attached to the Observationscorps. Between 1734 and 1736, the regiment served in Italy once more as part of the army commanded by the regiment's proprietor Field Marshal Lothar Königsegg. On February 18 1734, Colonel Kaczianer was appointed commander of Constance and Christian Moritz took the position of regiment commander and was promoted to colonel. On June 1 1734, he fought with his regiment at the Battle of Colorno. On June 29 he took part in the Battle of San Pietro near Parma. On September 15, he participated in the surprise attack on the enemy camp at Colorno. On September 19 1734, as commander of his regiment, Christian Moritz participated in the bloody Battle of Guastalla where his grenadiers distinguished themselves and where he was wounded.

On April 28 1735, Colonel Christian Moritz Count Königsegg was promoted to major-general (GFWM). He then took part in the war against the Turks, distinguishing himself in the Battle of Timok (October 1 1737).

On April 3 1741, Königsegg was promoted to Feldmarschall-Lieutenant (FML). In May of the same year, he was appointed proprietor of IR Nr. 16 (formerly “Livingstein”).

During the War of the Austrian Succession, FML Königsegg fought in Bohemia and Bavaria. On May 17 1742 at Chotusitz, he commanded 3 infantry regiments in the second line. On May 9 1743 at the Battle of Braunau, his horse was shot under him. In 1743, he acted as corps commander on the Rhine. In 1744, he campaigned once more in Bohemia. On September 30 1745 at the Battle of Soor, Königsegg commanded the infantry regiments Franz von Lothringen, Carl von Lothringen and Alt-Königsegg deployed on the left wing of Field Marshal Duke Lobkowitz]]. During this battle, Königsegg was wounded once more. In 1746, he was transferred to the Italian theatre of operation. By 1748, he was back on the Rhine.

After the signature of the Treaty of Aix-la-Chapelle (October 18 1748), Königsegg was appointed Austrian attaché at the Court of Kurköln.

At the end of March 1757, FZM Count Königsegg commanded a corps (18,000 foot, 4,900 horse) posted in Bohemia in the area of Reichenberg (present-day Liberec), Gabel (present-day Jablonne v Podještědi) and Niemes (present-day Mimoň). On Wednesday April 20, when the Prussians suddenly launched three columns towards Prague, Königsegg was totally surprised by this unexpected offensive. He ceased gathering magazines in the Lusatia and Erzgebirge regions and retired on Prague. On April 21, he managed to concentrate 16,000 men near Reichenberg. In the ensuing Combat of Reichenberg, he was defeated by the Duke of Braunschweig-Bevern and retreated to Liebenau (present-day Hodkovice nad Mohelkou), 32 km farther south. He then paused for a few hours in these difficult grounds. On April 23, Maquire's force made a junction with Königsegg at Liebenau and so did FML Fürst Hohenzollern with 15 sqns. Königsegg was now at the head of 21 bns, 27 grenadier coys and 49 sqns. On April 25, Königsegg realized that his rear was threatened by a Prussian corps coming up from Silesia in the north-east. He decided to withdraw towards Jungbunzlau (present-day Mladá Boleslav). On April 26, Königsegg reached Münchengrätz too late to prevent its occupation by the Prussians and realised that he could not reach Jungbunzlau before them. In the evening, his exhausted infantry finally reached Weisswasser. On April 27, Königsegg recalled his cavalry from Neubenatek, destroyed all crossings on the Lower Iser and then marched to Brandeis (present-day Brandýs nad Labem-Stará Boleslav). In the evening, he finally reached the Elbe at Brandeis where reinforcements were waiting for him. Only his rearguard under Colonel Loudon, remained on the right bank of the Elbe at Altbunzlau. With his reinforcements, Königsegg was now at the head of 26⅓ bns, 32 grenadier coys, 49 sqns, 20 heavy artillery pieces for a total of approx. 20,000 foot and 5,000 horse and hussars. Königsegg then dismantled all bridges across the Elbe between Nimburg to Melnik to the exception of the bridge at Brandeis. On April 29, Königsegg detached Major-General Duke d'Ursel with 6,000 men to cover the magazines at Nimburg and to maintain communication with Serbelloni's Corps. Up and downstream from Brandeis, small detachments guarded the Elbe. At Brandeis, Königsegg kept a force of approx. 12,000 foot and 3,500 horse. On May 2, Königsegg's Corps arrived at Prague and the Austrian army redeployed facing north with its right wing to the north of Maleschitz and its left on the Ziskaberg. On May 6, Königsegg took part in the 1757-05-06 - Battle of Prague where he commanded the infantry right wing.

On August 30 1758, Königsegg was appointed Field-marshal (FM) retroactively to May 1 1758. The same year, as a Knight of the Teutonic order (Deutscher Ordensritter), he was elected to Landkomtur (leader) of the Province of Alsace-Burgundy of this order. He went to Altshausen, the main town of his province. He invited several famous artists to Altshausen.

In 1763, the Church of the Holy Sepulchre was erected in Altshausen.

At the end of November 1774, Königsegg lost the position of Landkomtur and went to Immenstadt, bringing with him his 16 men orchestra and a big retinue. He let restore the interior of the Castle of Immenstadt and founded a horse riding school.