During the Great Northern War, the regiment was initially stationed in Livland with Wellingk's Corps in Spring 1700. In 1704, it was attached to Lewenhaupt's Corps. In 1708, it took part in the campaign in Lithuania, finally joining the main Swedish Army in Ukraine. In July 1709, a few days after the Battle of Poltava, the regiment surrendered to the Russian Army at Perovolotjna. However, it was reconstituted in 1710 and with the Army of Finland thereafter. It served with Armfeldt in the Norwegian campaign of 1718.

In 1721, at the Peace of Nystad, Sweden lost most of the Province of Vyborg where the regiment usually recruited. Thus, the regiment was reduced to only 730 men in 6 companies.

In 1724, the regiment was transformed into a dragoon regiment (Karelska dragonskvadronen).

In 1744, after the cession of further Finnish territories to Russia, the regiment was reduced to only 242 men: 2 companies of 100 men each in Savolax and half a company (42 men) in another district. These companies were now known as the Karelska Dragoon Corps.

In 1753, the regiment incorporated the company of Kymmenegårdsläns.

Exceptionally, the regiment counted only 2 ½ companies (242 men) instead of the usual 6 to 8 companies of other line cavalry regiments. It was usually attached to the Nylands Dragoons.

During the entire Seven Years' War, the regiment remained in Finland and did not take part in any campaign. 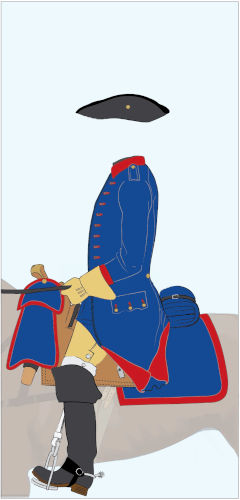 The musicians wore medium blue uniforms with red swallow nests laced yellow or white at the shoulders. The uniform had no additional laces.

The pikes used as staffs to carry the colours were always striped in blue and yellow. The standards were, and gold and silver cords, tassels and fringe.