This Grenzhusarenregiment (Frontier Hussars Regiment) was raised in January 1746 by FZM Joseph Prinz von Sachsen–Hildburghausen as the “Carlstädter Grenz–Husaren–Regiment” 1. It initially counted four squadrons2 3 and was stationed in Grahacz. It had no Chef and came under the direct jurisdiction of the Generalate of Karlstädt4. In 1751, the regiment had five companies, each counting 100 men5.

The regiment recruited in the Generalate of Karlstädt10 and garrison the town of Karlstadt (present-day Karlovac) in Croatia11.

As per the Etat nouveau des Troupes de sa Majesté Impériale Royale comme elles se trouvent effectivement l'an 1759 and Etat général des Troupes qui servent sa Majesté Impériale et Royale Apostolique sur pié en 1760, the regiment counted 4 squadrons (8 coys) for a total of 1,094 men. Grenzer units were mainly destined to wars against the Turks. For wars on other theatres of operations, they had to supply only a third of their total forces. However, this ratio was exceeded on several occasions during the Seven Years' War when the third who had served in the previous campaign was gradually replaced by another third provided for the incoming operations.

At the outbreak of the Seven Years' War, in 1756, the regiment contributed two squadrons6 to the Austrian Army. The first rank carried lances decorated with a black and yellow quartered pennant7.

Tactically a Grenz-Husar squadron was assigned to a foot battalion of the same Generalate.8

In 1763, the regiment was augmented to three squadrons.9

The regiment was disbanded in 1780.

Service during the War12

In 1756, the regiment was sent to Bohemia. In September, it took part in the attempt to relieve the Saxon Army blockaded in Pirna. On October 1, it fought in the Battle of Lobositz. It was also present at the attack on Tetschen.

In 1757, the regiment, led by Colonel Max Joseph Baron von Mittrowsky, distinguished itself in the attack on Hirschfelde. During the Prussian invasion of Bohemia, on May 5, the regiment took part in the Battle of Prague. By mid June, 2 sqns totalling 150 men were part of Nádasdy's Corps where they were attached to Erdrödy's Brigade. A few weeks later, on June 18, it also fought in the Battle of Kolin where it was deployed in the first line of the extreme right wing in Morocz's Division. In October, it took part in the Austrian raid on Berlin under the command of General Hadik.

In 1758, the regiment served in Silesia and fought in engagement near Troppau and was present at the siege of Neisse.

In 1760, the regiment joined the Austrian Main Army for its campaign in Saxony.

In 1761, the regiment took part in a victorious engagement near Hartmannsdorf in Saxony for which its commander, Colonel Martin von Knesevich reveived the den Maria-Theresien Order.

In 1762, the regiment took part in a combat near Heidersdorf in Silesia.

Until recently we had no information on the uniform worn by this unit at the outbreak of the Seven Years' War. Thanks to the kind authorisation of the Heeresgeschichtliches Museum in Vienna, Vladimir Brnardić, a member of our group, has had access to the Delacre Bilderhandschrift, a rare contemporaneous manuscript depicting the uniforms of the entire K. K. Army around 1756-57. For this reason, we can now present the uniforms of troopers circa 1748 and in 1762.

Furthermore, the uniform seems to have been modified a couple of times between 1755 and 1757. It might have temporarily changed to the uniform depicted by the Bautzener Bilderhandschrift (see below under Other interpretations) before the adoption of the dark blue uniform around 1757 or 1758). 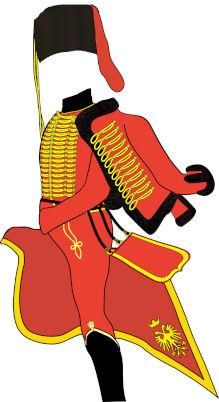 Uniform in 1748
Source: Dal Gavan from a template by David at Not By Appointment 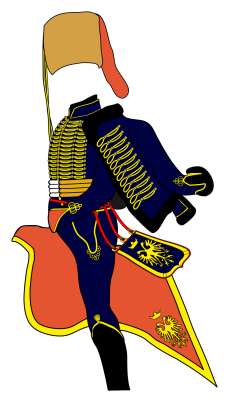 Uniform in 1762
Source: David at Not By Appointment

Donath depicts a uniform similar to those of the troopers with the following differences:

Schirmer mentions a light blue kolback (this seems to be a simple error) with a red bag.

Officers wore uniforms similar to those of the troopers but made with better material and of a better cut. Occasionally, officer also carried a mace or an ax.30 Officers wore a gold and black sash around the waist, under the pelisse but above the dolman.31 The sashes of staff and high ranking officers differed from each other. The neck stock of officers were white.

Officers were armed with a sword with a golden sword knot. The sword measured 80 cm and had gilt fittings.

Officers did not wear any cross-belt or cartridge box.

Officers wore a large moustache as the troopers.

NCOs did not carry carbines and, accordingly, no bandoleer for the carbine. However, they wore a bandoleer for their cartridge box. They also carried a stick which could be fastened to the left side of the pelisse by a sling. They also had black and yellow sword knots.

Musicians wore a long coat and a black tricorne.23

The hemispherical drums of each pair were differently tuned and for this reason were of different sizes (diameters of 40 and 80 cm). They were usually made of copper but some honorary kettle-drums could be made of silver. The drumhead was held in place by cords and by an iron ring.25

The largest drum was carried on the left side of the horse and the smallest on the right side. To play, the kettle-drummer used two mallets whose heads were covered with leather. The extremities of the mallets were fastened together with a strap worn around the neck of the kettle-drummer.26

The kettle-drums were decorated with aprons. Aprons were usually lined with dark blue canvas, trimmed with braids and lace and decorated with the initials of the regiment owner. For parade, silken aprons richly decorated with gold or silver embroidery were used. They were usually paid for by donations of high ranking officers.27

In the quartiers of the regiment, the kettle-drums and guidons were constantly guarded. Their loss Pauken kamen im Quartier zur Standartenwache, ihr Verlust was considered shameful.28