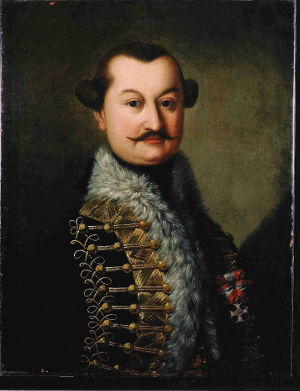 Martin, Baron Knežević came from an old aristocratic family from Bročno/Hercegovina. One of his ancestors was killed in 1463 with Bosnian King Stephan II in the battle of Jajce. In 1466, another of his ancestors, Ivan Knežević, was ennobled by King Matthias Corvinus.

Martin, Baron Knežević was born in 1708 in Senj in Croatia. His father was Juraj Knežević, major in a Lika militia infantry regiment; his mother was Katarina Stibor. After his mother’s death, Martin’s father married the widow Helena Vukasović, daughter of Duke Pribinović.

In 1728, at the age of 20, Martin was already captain of Zvonigrad and fought – with other members of the family – against the Turks. Martin distinguished himself during the Austro-Turkish War (1737– 39) and received a golden necklace with a medallion from Emperor Charles VI for his valour.

During the War of the Austrian Succession (1740–48), Martin Knežević took part in several combats against French troops in Bavaria, Alsace and Bohemia.

In 1746, Prince Hidburghausen created a new hussar regiment of four squadrons in the Karlstadt (present-day Karlovac/HR) Generalate: the Karlstädter-Grenz-Husaren-Regiment (Karlovac Frontier Hussar Regiment). Its commander was Max Joseph, Baron Mitrovsky von Nemyšl. Martin Knežević, joined this regiment with the rank of captain. The regiment fought in the Netherlands until the end of the war in 1748. In the meantime Knežević was promoted to major.

In 1751, the Karlstädter Grenz-Hussars suppressed an uprising in Lika. In 1754, Knežević was promoted to lieutenant-colonel.

On February 20, 1757, around 4,000 Grenzer light troops, Hungarian infantry, 200 dragoons and all the Karlstädter Grenz-Hussars took part in the surprise attack on Hirschfelde, initiated by FML Sigismund Count Maquire. The Imperial troops drove the Prussians out of the city, killing 2 officers and 23 men, wounding 40 men, and taking 7 officers and 113 men as prisoners of war. Around 9:00 a.m., the Imperial troops retired towards Reichenberg (present-day Liberec/CZ). On April 21, two squadrons of Karlstädter Grenz-Hussars took part in the Combat of Reichenberg (present-day Liberec/CZ); and on May 6, in the Battle of Prague where they were deployed in the Corps de Reserve. The hussars escaped after the lost battle and, on June 18, took part in the ensuing Battle of Kolin. Two squadrons were deployed in Nádasdy’s corps, in the division of Philip von Beck. During the battle, Knežević was severely wounded. After recovery, he returned to his regiment.

On January 24, 1758, Knežević was promoted colonel and commander of the Karlstädter Grenz-Hussars. During that campaign, his regiment served in Silesia where it took part in a combat near Troppau (present-day Opava/CZ). Furthermore, a detachment of the regiment was at the siege of Neisse (present-day Nysa/PL).

In 1759, the Karlstädter Grenz-Hussars were not involved in any combat

In 1760, the Karlstädter Grenz-Hussars were assigned to the main army and fought in Saxony. In June, Colonel Knežević distinguished himself. He was sent by FZM Gideon von Loudon with 200 of his Karlstädter Grenz-Hussars, 200 men of the Nádasdy Hussars and 400 men of the Saint-Ignon Dragoons to surprise 600 Prussian horse between Landeshut (present-day Kamenia Gora/PL) and Hartmannsdorf (present-day Jaczkow/PL). Knežević reconnoitred the positions well in advance and the surprise was total. As a result, 100 Prussians were killed, 190 taken prisoners of war, and 200 horses captured. The remaining Prussians fled but were captured by 200 cavalry and a few hundred Grenzer light troops led by Colonel Pezinger who had been sent by FZM Loudon from Schmiedeberg (present-day Kowary/PL), Einsiedel (present-day Pustelnik/PL) and Landeshut (present-day Kamenia Gora/PL).

On April 30, 1762, Colonel Knežević received the knight cross of the Maria-Theresia-Order in the 7th Promotion. The recommendation had been made by FZM Loudon and Major-General Mitrovsky von Nemyšl. In June of the same year, during a combat near Heidersdorf (present-day Jedrzychow/PL), Knežević was wounded once more.

On January 19, 1771, Knežević was promoted to major-general (retroactively to February 11, 1759). Nevertheless, he remained commander of his regiment until his retirement in 1773.

In 1773, Baron Martin Knežević retired from active military service and then lived in his estates at Gračac in Croatia.

Baron Martin Knežević died in his estates on November 30, 1781 and was buried in the church of St. Georg-martyr in Gračac.

Martin Knežević was married with Ursula Vukasović, the couple had 15 children but only six sons and two daughters survived. All sons served as their father in the Imperial army and reached high ranks, while the youngest of them, Vincent Knežević, also received the knight cross of the Maria-Theresia-Order.