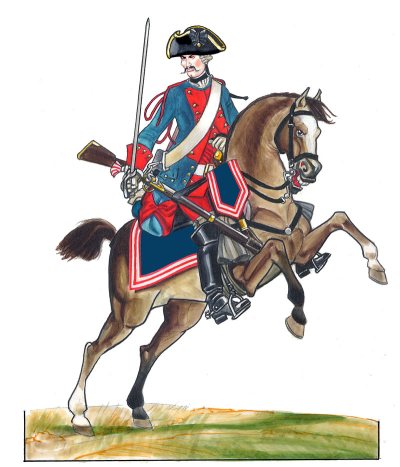 This regiment of dragoons was created and recruited in Lower Austria. Colonel Ludwig Count Herbeville received the relevant decree on March 15 1683. The kernel of the new regiment was formed by 200 men from Saurau Dragoons and by 100 men from each of the Schulz, Castell and Kueffstein regiments.

In 1683, the still incomplete regiment fought in the battle of Vienna and, in 1684, in the siege of Ofen. From 1685 to 1687, it was stationed in Transylvania and saw no action. From 1688 to 1698, it formed part of the corps who campaigned against the Turks in Transylvania.

In 1691, 500 men from the Lower Austria militia dragoons were incorporated in the regiment.

In 1716, the regiment returned to Hungary where it once more fought against the Turks at Peterwardein and Temesvár. In 1717, it took part in the battle of Belgrade.

Until 1734, the regiment garrisoned various places in Hungary.

In 1734, during the War of the Polish Succession, it was sent to Italy where it fought in the battles of Parma, Quistello and Guastalla). In 1735, it was transferred for a short time to Germany but soon returned to Italy.

From 1737 to 1739, the regiment campaigned in Transylvania and took part in the battles of Kornia and Mehadia.

At the outbreak of the War of the Austrian Succession, in 1741, the regiment took part to the battle of Mollwitz where his proprietor, FML Joachim Baron von Römer, was killed in action. In 1742, it fought in the battle of Chotusitz and was at the siege of Prague. In 1743, it campaigned in Bavaria (where its grenadiers fought at Dingolfing) and on the Rhine. In 1745, it took part in the battles of Hohenfriedberg and Soor.

The regiment was disbanded in 1802 as “Sachsen-Coburg-Saalfeld”. The dragoons were transferred to different chevaux-legers regiments.

In June 1756, at the beginning of the war, the regiment was stationed at Körmend in Hungary and counted 806 men and 801 horses. By September, it was in Bohemia with Piccolomini's covering force in the Königshof-Kolin region. However, the horse grenadier company of the regiment was with Browne's Corps in the region of Lobositz. On October 1, during the Battle of Lobositz, the horse grenadiers were assigned to the detachment under Count Lacy deployed near Leitmeritz and along the Elbe up to Schreckstein.

By August 2 1758, the regiment was part of the reserve of the main Austrian army under the command of Daun near Jaromirs. Daun was following up the Prussian army retiring through Bohemia after the failure of the Prussian invasion of Moravia. Some sources (Wrede and the Albertina Handschrift) mention that the regiment took part in the Battle of Hochkirch on October 14. This is fairly possible even though it is not specifically mentioned in the order of battle. We can reasonably assume that it was part of the Prince of Baden-Durlach's Reserve.

In 1759, the regiment was assigned to Loudon's corps which joined the Russians and, on August 12, took part in the Battle of Kunersdorf where it was deployed in the reserve of the right wing as part of Loudon's cavalry brigade.

On June 23 1760, the regiment, led by Colonel Karl von Hocke, took part in the Battle of Landeshut where it captured two standards and the silver drums of the Prussian Alt-Platen Dragoons. On August 15, it fought in the Battle of Liegnitz where its colonel, Carl von Hocke, distinguished himself (he would later receive the Maria-Theresia-Order for his conduct during the battle).

In 1761, the regiment was with the main Austrian army in Saxony. It did not take part in any major action.

In 1762, the regiment operated with the main army in Silesia and was at the Combat of Reichenbach. 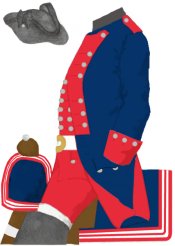 N.B.: until 1757, the regiment wore a blue coats with yellow facings.

The Bautzener Bilderhandschrift shows a white laced tricorne, yellow buttons, buff breeches and blue waistcoat. It also depicts a much lighter shade of blue which looks more like sky blue.

Donath's plate depicts a light blue uniform (quite similar to the one of the Bilderhandschrift) and yellow buttons.

In March 1761, the regiment was authorised by Empress Maria Theresia to keep and use the drums which it had captured on June 23 1760 at Landeshut from the Prussian Alt-Platen Dragoons. A regimental tambour was incorporated, but its cost had to be covered by the officers of the regiment.