The Leibregiment zu Fuss (Nothaft) consisted of 1 battalion counting 6 fusilier companies, 1 grenadier company, and 2 4-pdr. guns with 2 horses (from the Munster arsenal) for a nominal total of 820 men. Indeed the regiment strength varied between a maximum of 711 men (June 1, 1758) and the lower figure of 373 men on April 30, 1759.

Soubise rated this regiments, as well as the other Cologne regiment, as "mediocre". Indeed they were filled up almost exclusively with recruits, whose quality could be improved only with better training and battle experience. These regiments were used, together with the Munster troops, as a reserve corps of the Reichsarmee. After the capture of most of the Leib-Regiment in 1759 the quality of rank and file decreased abruptly, also because the area occupied by the French around Cologne could provide no further money neither recruits.

In 1757, the regiment, then counting only 572 men, was with the Reichsarmee operating in Thuringia and Saxony. In August, this army combined with a French contingent under the Prince de Soubise to form the Franco-Imperial army for the planned invasion of Saxony. Soubise rated this regiment as "mediocre". On November 5, this combined army suffered a crushing defeat at the hands of Frederick II in the battle of Rossbach.

In the Spring of 1759, Allied as well as Prussian corps launched several incursions behind enemy lines. On April 1, during such an incursion, the Hereditary Prince of Brunswick attacked Meiningen and Wasungen, forcing their garrisons to surrender as prisoners of war. The garrison of Wasungen consisted of Nagel Infantry while the Meiningen garrison consisted of Elverfeldt Infantry and Kurköln Leibregiment. The latter regiment did not put up the smallest kind of resistance. It was celebrating Mass and had not established any outposts. On this occasion, the Hereditary Prince also captured 6 guns and 6 flags. During this raid, he made a total of some 2,000 prisoners.

On August 20 1760, during the campaign in Saxony, the regiment took part in the combat of Strehla.

In March 1761, a Prussian corps (7 bns with 3 cavalry and hussar rgts) conducted an incursion in Franconia. On April 2, this corps attacked and took prisoners the contingent of Cologne (2 bns, probably Leibregiment Nothaft and Wildenstein Infantry) defending Schlitz.

The main sources for the Cologne infantry uniforms are the Becher Handschrift and Emmerich Herter: Richard Knotel used Becher as his main source for his Uniformenkunde Plate, n.53, Band V and Herbert Knotel use the same source for his ZFG Card No. 220 which is depicted in this page. It is not clear which Cologne regiment is described in these plates and there is also a conflict between Becher and Herter about the number of buttons on the cuffs and their colour. Indeed Herter gives silver/white buttons/lace whereas Becher gives brass/yellow. According to Herter both the Nothaft and the Wildenstein regiments had the same uniforms, the first with silver, the second with brass buttons. The analysis given by Martin Lange, quoted in the Pengel & Hurt booklet on Bavaria, Saxony and Palatinate, give credits to Herter. As far as ZFG Card No.221 (which depicts the Wildenstein regiment with white facings) is concerned Lange is doubtful about the date of that uniform, which could be before or after the Seven Years War.

If we choose to follow Herter, the uniform of the Cologne Leibregiment should be the following: 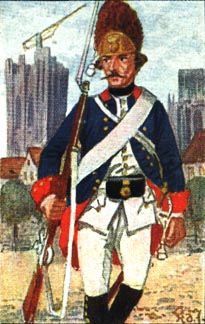 NCO: Silver hat lace, silver border to collar and cuffs, hazelnut stick. Officiers, silver buttons, silver gorget. A silver sash worked through with blue silk. A sword and a cane with silver plated knob. A spontoon almost eight feet long decorated with blue and white tassel depending on the rank. Grenadier officiers were armed with a musket instead of a pontoon.

Drummers had white laces on their sleeves.

Colonel flag (Leibfahne): White field; centre device consisting of the crowned arms of the Bishopric of Cologne surrounded by a golden laurel wreath tied with a red ribbon; the motto “PER ASPERA AD ASTRA” under the centre device.

After 1761: White field; Virgin Mary in the middle, similar coloring to Bavarian flags. The motto "MONSTRA TE ESSE MATREM" above, F.W.G.Z.S.I.R. below, probably gold, gold rays. On the left side the Koln and Munster shield with central escutcheon Konigsegg. In the time of Clemens August his central escutcheon was used.

Regimental flags (Kompaniefahnen): Field consisting of six alternating blue and white horizontal bands (topmost band was blue); centre device consisting of the crowned arms of the Bishopric of Cologne on a white field (top left: white with black cross (Koln); top right: white rampant horse with red field (Westfalen); below left: three golden hearts on red (Engern); below right: white eagle on blue field (Arrnsberg); central device with gold crowned lion on black-top left, below right- and blue/white bavarian motif - top right, below left-. A smaller escutcheon in the centre gives the blue and gold orb on a red field, the central medallion and wreath gold, sceptre and bishop crozier gold, bishop mitre gold, orb above furnished in red and ermine with black spots at the bottom) within a golden laurel wreath tied with a red ribbon; the motto “PER ASPERA AD ASTRA” under the centre device.

Note: these colours are illustrated in Gisby's website at Flags of the Reichsarmee during the Seven Years' War.