In August 1758, a squadron of Kurmark Provincial Landhussars was raised in Berlin under the name of Land-Husaren-Escadron Wangenheim. This squadron comprised:

In April 1762, after the ceasefire with Russia and Sweden, the Kurmark Provincial Hussars were combined with the two Pomeranian Provincial Hussars squadrons and the Neumark Kammer Hussars to form the Provinzial-Husaren-Bataillon Hohendorff totalling 4 squadrons.

At the end of the Seven Years' War, the Kurmark squadron was disbanded and its troopers incorporated into various Prussian cavalry regiments of the Mark.

The squadron assumed various patrol and escort duties who brought it to Magdeburg, Leipzig, Küstrin and Demmin.

On September 22 1758, the squadron took part in an engagement near Linum where it drove the Swedes back to Fehrbellin.

On October 19 1759, the squadron, along with the Pomeranian Provincial Hussars, took part in an engagement near Demmin.

In 1760, the squadron protected the population fleeing from Berlin from Russian troops.

Initially, the troopers of the squadron, who were recruits destined to regular hussar regiments (Zieten, Ruesch and Werner), wore the uniform of their parent unit. They received a new uniform at the end of September 1757, before the official creation of the unit. 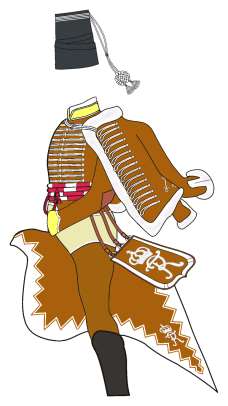 Uniform in 1758
Source: Dal Gavan from a template of Not By Appointment

Troopers also had a white mantel carried in a light orange brown sack. They were armed with a musket and maybe a short sabre.

Officers had silver cords and lace to both the pelisse and dolman.

NCOs wore uniforms similar to those of the troopers with the following distinctions:

The uniform of the trumpeters is not known.

Guidons were not carried by militia units.