The regiment consisted of 2 battalions. Each of these battalions counted 4 fusilier companies (140 men each) and 1 grenadier company (100 men). Furthermore, each battalion had 2 light 4-pdrs battalion guns.

During the Seven Years' War, the regiment inhaber were:

In February 1757, both battalions were assembled at Amberg. In April, the first battalion of the regiment was assigned to the Auxiliary Corps which was being assembled to serve with the Austrian Army on the basis of a subsidy contract settled with France on March 29. Meanwhile, the second battalion remained in Bavaria. In August, the second battalion was transferred from Amberg to Straubing. The first battalion was combined into a temporary regiment with with I./Preysing. As part of the Auxiliary Corps, this combined regiment was assigned to the Austrian corps under the command of count Nádasdy. In October, the combined regiment took part to the siege and capture of Schweidnitz where it withstood the bombardment of the trenches by the Prussian artillery and the sally of the Prussian grenadiers against the Austrian batteries. On November 22, the combined regiment was at the battle of Breslau where it formed part of the corps of count Seyssel d’Aix on the right wing of the second line. A few weeks later, on December 5 at the battle of Leuthen, the regiment was part of Nádasdy's corps on the left wing. It was deployed at the extreme right of this corps at the point of junction with the Austrian army, between Herzog Clemenz Infantry on its left and the Austrian regiment Macquire on its right. The regiment shared the fate of the left wing, being routed by the Prussian troops who attacked its flank.

In May 1758, the second battalion returned to Amberg. By April, it was already decided to send back the first battalion to Bavaria. Nevertheless, it contributed 1 company of fusiliers and 1 company of grenadiers to a converged regiment placed under the command of colonel de la Rosée. During the siege of Olmütz, this converged regiment distinguished itself against the Prussian besiegers but it lost more than 100 men in these combats. In July, the various companies forming this converged regiment rejoined their respective units. In August, because of the heavy losses it had suffered in the previous campaign, the I./Kurprinz battalion was sent back to Bavaria. At its arrival in Amberg, the battalion counted only some 400 men. The regiment then remained in Bavaria till the end of the war. 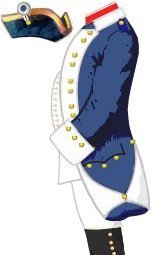