Private of the 1st battalion of the Légion Britannique in 1760 as per the Gmundener Prachtwerk - Copyright: Franco Saudelli

In December 1759, 5 free battalions were formed in Paderborn by General Spörcken.

By an order given on February 13 1760, the Hanoverian brigades of Count Kielmansegg, von Post and von Scheiter as well as regiments stationed in Westphalia and the garrisons of Münster had to contribute a total of 5 captains, 25 officers and 60 NCOs for the foot. Similarly, Hanoverian cavalry regiments (Leib-Regiment Reuter, Grothaus, Hodenberg, Heise and Walthausen and 3 Hanoverian dragoons regiments had to contribute 10 officers and 20 NCOs for the horse squadrons. These commandeered officers and NCOs were later returned to their original unit. Furthermore, 10 NCOs and 100 men originating from Busche Dragoons, Reden Dragoons, Breitenbach Dragoons, Leib-Regiment Reuter, Grothaus, Hodenberg, Heise, Walthausen, Freytag Jager Corps, Luckner's Hussars and Scheither's Corps were permanently transferred to these new battalions. By April 1, each battalion consisted of 1 cavalry squadron and 4 foot companies. Battalions were not designated by a number but rather by the name of its commander. By this date, the present battalion was under the command of Major von Stockhausen and was based in Soest. On April 9, Duke Ferdinand of Brunswick named the new unit Légion Britannique. On May 5 1760, the chancery of the British King George II issued letters patent to all officers of the Légion Britannique. Indeed, although it served with the Hanoverian Army, the entire unit was under British pay. On May 20, George II appointed Major von Bülow commander of the Légion Britannique. Initially, all battalion remained in their garrison place, filling their ranks. By August 14, the unit counted only 2,039 men, still missing 1,093 men to reach its full establishment of 3,132 men.

Throughout the war, it consisted mainly of deserters, foreigners and sometimes prisoners of war. As with all other battalions of the Legion, desertion was endemic in the unit.

Each Legion battalion consisted of four companies of about 125 men for a total of 500 men in each battalion. Until 1762, before the amalgamation of all dragoon squadrons into a distinct Legion unit, the battalion also counted a dragoon squadron of 101 men.

During the Seven Years' War, the 1st Battalion was under the command of:

Towards the end of the Seven Years' War, in December 1762, the British transferred the unit to the Prussian service. On March 27 1763, the Légion marched to Magdeburg where it was disbanded. Foreigners were incorporated into Westphalian regiments of the Prussian Army.

The unit was intended for the Kleinkrieg and fought many skirmish actions.

In July 1760, the five battalions of the Legion were detached along with Hessian Hussars and a battalion of Hanoverian Jägers to capture the bridges over the Diemel at Liebnau and Trendelburg. Later during the same month, at Warburg, they were deployed on the right flank along with battalions from Scheither (No. 1A), Estorff (No. 12B), Block (No. 8B), Monroy (No. 10B), and the 87th Foot (Keith's Highlanders). The right flank was under the command of Lt.-Gen. Hardenberg. During the battle, the Legion had to make demonstrations against the French front to cover the outflanking march of the main army. The Legion also took part to the pursuit of the defeated French, it seized the opportunity to loot the town of Warburg. On August 15, the 5 battalions were sent to the rear to complete their recruitment: 2 battalions were sent to Münster, 2 to Osnabrück and 1 to Paderborn. They remained in these locations, still undermanned and poorly equipped, till they took their winter-quarters.

In July 1761 at Vellinghausen, the five battalions were part of the reserve along with the 87th Foot (Keith's Highlanders) and Hanoverian battalion Otten (No. 1B). Two of the battalions had to be deployed in Haus Antepoth on the extreme left of the Allied line where they successfully contained a French attack.

On December 9 1762, the battalions of the unit received orders to march to their winter-quarters in Horstmar and Ahaus between the Ems River and the border with the Netherlands. The British Colonel Beckwith received overall command of the Légion Britannique. The unit was then transferred into the Prussian service. 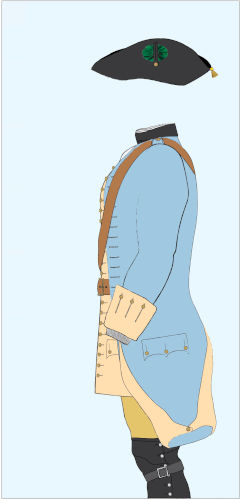 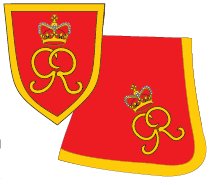 Dragoons wore the same uniform as the infantry. However, they were distinguished by a gold aiguillette on the right shoulder and they wore black boots instead of gaiters.

Officers had gold lace lining the cuffs and vest, a green cockaded hat, and carried a red sash slung over the right shoulder.

The colours were of the British pattern but the details are not known.