During the War of the Polish Succession, the regiment served on the Rhine from 1733 to 1735. In 1736, it was stationed at Sarrelouis.

During the War of the Austrian Succession, from 1742 to 1748, the regiment took part in the various campaigns in Flanders.

By 1756, the regiment counted two squadrons.

When the French Cavalry was reorganised on December 1 1761, the regiment was incorporated into Royal-Lorraine Cavalerie (former Des Salles Cavalerie). Effective incorporation took place only on April 14 1763 at Montreuil-sur-Mer.

By August 1 1757, the regiment had joined the French army in Germany. At the end of the year, it took its winter-quarters in the first line in the area of Bremen. 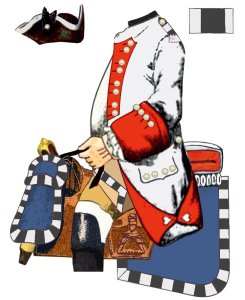 N.B.: That the regiment was still carrying standards showing the arms of Heudicourt in 1753, when it was the property of the marquis de Lénoncourt, is not strange : both families were united following a marriage at the end of the 17th century, the chief of the family becoming Sublet, marquis de Heudicourt et Lénoncourt.