The regiment was raised in Philipppsburg on January 1 1675 from the companies of M. de Fay.

During the War of the Polish Succession, the regiment was in a the camp in Alsace in 1732. In 1733, it served on the Rhine.

During the War of the Austrian Succession, the regiment took part in the invasion of Bohemia in 1741 and 1742. In 1743, it was back in France and stationed in Verdun. In 1744, it was stationed on the coasts of Bretagne. In 1746, it was initially stationed at Lorient before being transferred to Genoa. In 1748, it was stationed at Carpentras.

In 1756, at the outbreak of the war, the regiment was stationed at Belfort.

In 1757, the regiment was transferred to Besançon. By August 1, it was garrisoning Lons-le-Saunier in Franche-Comté.

At the beginning of the Summer of 1758, the regiment joined the Army of the Lower Rhine now under the command of the Marquis de Contades. In Mid August, after the retreat of the Allied army to the east bank of the Rhine, the regiment, as part of Contades' Army, crossed the Rhine to follow the Allis. On August 20, it was encamped near Wesel where it formed part of the Reserve.

On April 13 1759, the regiment took part in the Battle of Bergen where it formed part of the cavalry reserve deployed in the third line behind the Wartberg. In June, during the French offensive in Western Germany, the regiment was part of the Reserve of dragoons.

By the end of January 1760, the regiment had taken its winter-quarters in the first line of the French army. By mid March, the regiment was billeted in Gelnhausen and Wächtersbach, still in the first line. By May 23, it was part of the right vanguard of Broglie's Army. Early on June 24, the Légion Royale, supported by Du Roy Dragons and La Ferronnaye Dragons, attacked the Allied rearguard near Homberg and forced it to retire. By December 30, the regiment had taken its winter-quarters in Gotha.

On February 15 1761, the regiment took part in the Combat of Langensalza where it captured a standard. A month later, on March 21, at the engagement of Grünberg, it was with the French mounted force, consisting mostly of dragoon regiments, who charged the retreating troops of the Hereditary Prince. The Brunswick infantry was completely destroyed. Many men were cut down and 6 battalions were taken prisoners. During the same year, the regiment also took part in the action of Einbeck and in the capture of Ostende.

The uniform did not change with the new regulation of 1757. 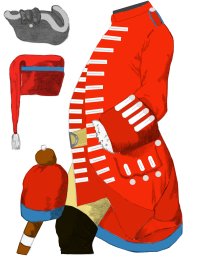 Throughout the war the French dragoon uniform seems to have evolved significantly. Our only primary sources for the uniform at the start of the conflict are the Etat Général des Troupes Françoises of 1753, and the Etrennes Militaires of 1758. The first primary pictorial evidence comes from Raspe in 1761. Here we present various interpretations of the evolution of the uniform.

The livery worn by the musicians is unfortunately unknown.