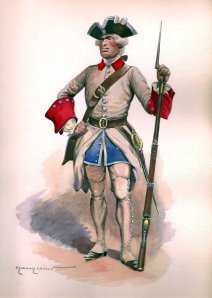 N.B.: the cross-belt and waist-belt should be of whitened leather, furthermore the tricorne and the cuffs belong to the uniform of the 1735-1745 period

The regiment was raised on October 3 1634 as a gentleman's regiment for the Sieur de Boyons.

In April 1638, when the famous Jean de Werth was taken prisoner in the Battle of Rheinfeld by the Duke Bernard of Saxe-Weymar, he was sent from Nancy to Paris under the escort of 400 musketeers of the regiment commanded by the Lieutenant-Colonel de Paleville. In July of the same year, the regiment took part in the siege of Remiremont where its colonel was mortally wounded, and in the Battle of Rheinau. On 15 November, it became the property of the Marquis d'Huxelles. In 1639, the regiment took part in the capture of Morhange and of the Castle of Moyen. In 1640, it campaigned in Lorraine. In 1641, it was attached to the Army of Champagne an fought in the Battle of Marfée (aka Battle of Sedan). In 1642, it was sent to Roussillon. In 1643, it took part in the reliefs of Mirabel, Flix and Cap-de-Quiers; in 1644, in the defence of Lérida, and in the capture of Castillon; in 1645, in the siege of Roses; in 1646, in the sieges of Orbitello, Piombino and Portolongone; in 1647, in the combat of Cividale near Bozzolo; in 1648, in the combat de Casalmaggiore and in the Battle of Cremona.

In 1649, the regiment was recalled to France to quench the Fronde (1648-1653) and participated in the siege of Cambrai and in the capture of Condé. In 1650, it took part in the pacification of Burgundy and in the siege of Bellegarde. In 1651, it was stationed in Burgundy to watch this province. In 1652, it initially guarded the bridge of Gergeau and later fought in the combats of Étampes and Faubourg Saint-Antoine. In 1653, it took part in a second siege of Bellegarde before being transferred to the Army of Champagne with which it took part in the sieges of Rhétel, Mouzon and Sainte-Ménehould.

On February 11 1659, Mazarin incorporated one of his own regiments into this newly acquired regiment who took the name of “Mazarin-Français”

On March 12 1661, after Mazarin's death, the regiment became the property of Queen Marie-Thérèse and became known as “La Reine”. The same year, the old regiment of Limousin was incorporated in La Reine Infanterie.

In 1666, the regiment participated in the camp of Monchy.

In 1667, at the outbreak of the War of Devolution (1667–68), the regiment took part in the capture of Berghes and Furnes. Twelve companies of the regiment were then left in Furnes as garrison while the rest of the unit continued the campaign. In 1668, all companies which were not garrisoning Furnes took part in the submission of Franche-Comté.

In 1684, the regiment took part in the siege and capture of Luxembourg.

In 1688, at the outbreak of the Nine Years' War (1688–97), the regiment took part in the siege of Philisbourg and in the capture of Mannheim, Frankenthal and Mainz, before taking its winter-quarters in Heidelberg. In 1689, it drove back a party of 600 Hessians raiding the neighbourhood of Heidelberg. It then took part in the conquest of Palatinate. In 1690, it served once more in Germany. In 1691, the regiment was transferred to Flanders where it participated in the siege of Mons. In 1692, it took part in the siege of Namur, in the Battle of Steenkerque, and in the bombardment of Charleroy; in 1693, in the campaign on the Moselle before returning to Flanders and being sent to Germany and then back to Flanders. In 1694, the regiment was assigned to the guard of the Coasts of Normandy. In 1695, it campaigned on the Rhine. In 1696, it returned to Flanders. Part of the regiment was then stationed at Potte on the Scheldt and another part on the coast of Lower-Britanny. In the winter of 1696-1697, the three battalions of the regiment were assembled in Strasbourg. In 1697, the entire regiment served on the Rhine.

In 1698, the regiment took part in the training camp of Compiégne.

During the War of the Austrian Succession, the regiment initially served in Bohemia in 1741 and 1743. In 1744, it was transferred to the Alps. Then it served in Italy in 1745 and 1746. In 1747, based in Montpellier, it was attached to the French army defending Provence.

By the time of the Seven Years' War, the regiment counted two battalions and had prévôté (provostship).

During the Seven Years' War, the regiment ranked 24th and the queen was the nominal colonel of the regiment, but on the field it was commanded by the following colonels-lieutenants:

By August 1 1757, the 1st Battalion was stationed at Dieppe in Upper Normandy.

In 1760, the 1st Battalion left for Germany. On October 16, it arrived in Rheinberg to reinforce Castries' Corps but did not take part in the Battle of Clostercamp.

On February 1 1761, with the severely depleted 2nd Battalion back from Canada, the regiment was reorganised into only 12 companies of 20 fusiliers and one company of 40 grenadiers.

At the end of the war, the battalion joined the garrison of Aire. In May 1763, it was transferred to Maubeuge.

On May 3 1755, the 2nd Battalion (12 companies: Assezat, Bayard, Delmas, Desnoës, Faudoas, Hébécourt, Hébécourt, Lass, Montbrais, Montreuil, Pascalis, Peres) embarked at Rochefort for Canada under the command of Lieutenant-Colonel Jean-Georges Dejean de Roquemaure. The ship of the line Lys, transporting 4 of these companies was captured on June 8 by the Royal Navy off the coasts of Newfoundland before reaching Québec. The 8 remaining companies of the 2nd Battalion disembarked at Québec on June 23. Soon after, they were sent to relieve Fort Saint-Frédéric (present-day Crown Point) and to put a stop to the British advance on Lake Champlain. On September 8, 2 companies of the 2nd Battalion, under Dieskau, took part in the Combat of Lake George. Along with 2 companies of Languedoc Infanterie, these 2 companies of La Reine Infanterie were the first French regulars to take part in a battle in North America during the Seven Years' War. After this battle, British provincial troops maintained their position but stopped their progression on Fort Saint-Frédéric. The regiment took its winter-quarters in Montréal.

In May 1756, the 2nd Battalion was posted at Carillon (present-day Ticonderoga) where it took part in the construction of Fort Carillon. The Marquis de Montcalm arrived at Carillon during the Summer and considered the place secure. When Montcalm left for Lake Ontario, the battalion remained at Carillon with the small force placed under the command of the Chevalier de Lévis to defend the place. On November 2, the battalion left Carillon to reach its winters-quarters upstream from Québec on the left bank of the Saint-Laurent River at Sainte-Anne-de-Beaupré and Beauport.

By July 20 1757, a French force totaling 8,000 men (including the 2nd Battalion) was gathered at Carillon. On August 1, this force left Carillon with Montcalm and advanced upon Fort William Henry. The battalion then took part in the siege of Fort William Henry which lasted from August 5 to 9. On August 16, after the capture and destruction of the fort, the French force reembarked and returned to Carillon. On September 4, the battalion left Carillon and arrived at Saint-Jean on September 7. It then worked at the fortification of the place. On October 12, a piquet of the battalion was sent to Carillon to garrison the place during winter. On October 27, Lévis sent the battalion to Québec to garrison the town during winter.

On March 13 1758, Indian scouts located a party of Rogers' Rangers near Fort Carillon. A small detachment of the battalion was among the party sent against them. They engaged them during the so called skirmish of Snow Shoes. The rangers lost 125 men in this engagement. On May 15, the shortage of supplies was such in Québec that the battalion, who had wintered there, left the town for Carillon where ampler supplies were available. On June 3, it arrived at Carillon where all other regular battalions were assembling to stop the British offensive on Lake Champlain. On June 30, the battalion was part of Bourlamaque's detachment who took position at the head of the portage at the outlet of Lake Saint-Sacrement (present-day Lake George). On July 6, it followed the main French force to the left bank of the fall before retreating to Carillon. On July 7, it worked at the entrenchment in front of the fort. On July 8, the battalion took part in the victorious Battle of Carillon where it was deployed at the extremity of the right wing under Lévis. In this battle, the battalion lost Lieutenant Daudin and 7 soldiers killed; and Captain d'Hébécourt, Captain Le Comte, 2 lieutenants and 45 soldiers wounded. Between November 1 and 5, the entire French army left Carillon to move to its winter-quarters, leaving detachments from various battalions to guard the fort. The battalion took up its winter-quarters between Saint-Augustin and Grondines.

In 1759, the 2nd Battalion formed part of Bourlamaque's force assigned to stop the British advance from Lake Champlain. In September, after the capitulation of Québec, the 2nd Battalion withdrew towards Montréal where the remnants of the French army were concentrating. In November, the regiment took up its winter-quarters along the Chambly River.

By March 1760, 51 men of the battalion had been detached to Saint-Jean while 36 were unfit for duties. This left 358 men available for the planned expedition against Québec. The latter were supplemented by 237 men from the militias of Chambly, Saint-Charles, Saint-Denis, Saint-Antoine and Saint-Ours who were integrated into the battalion. From April 21 to 25, transport vessels gradually sailed from Montréal for Québec. Overall the battalion then counted 27 officers, 370 regulars, 223 militia and 38 non-combatants for a total of 658 men. On April 28, it took part in the Battle of Sainte-Foy where it was deployed in the second line. On May 24, after the arrival of British reinforcements at Québec, the battalion left Jacques-Cartier. In mid August, La Reine Infanterie and Royal Roussillon Infanterie were sent to Saint-Jean under the command of M. de Roquemaure who was later reinforced with all the Milice du district de Montréal. On September 9, after the capitulation of Montréal, the battalion still counted 346 men and 21 officers. On September 16, as per the terms of the capitulation, the battalion was embarked aboard British transports who reached Québec on October 10 and 11 and then sailed for France where they arrived in December. 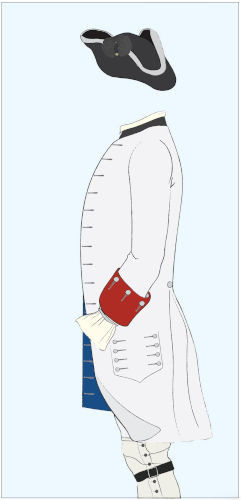 Initially, in 1755, the Ministry of the Navy supplied new uniforms to the troops sent as reinforcement to Canada. Accordingly, the 2nd Battalion was issued uniforms differing from its regulation uniform. At a certain time during the following years, this battalion probably received uniforms more in accordance with its full regimental regulation. The Ministry of the Navy specifications were as follows. 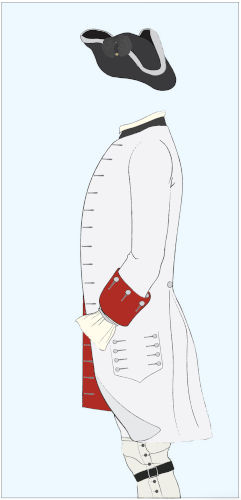 Even though officers wore a coat of the same colour and pattern as that of the men, albeit of better material, they had silver buttons and wore a gilted gorget. Furthermore, their waistcoat was laced silver lace.

On active service, dismounted officers often exchanged the spontoon for a musket.

Drummers and fifers wore the Queen's Livery depicted in the following table.

In the general state of the supplies of the six regiments embarked for Canada in 1757, the drummers of the Artois, La Reine, Béarn, Bourgogne, Languedoc and Guyenne regiments were described as wearing the King’s Livery.