At the beginning of 1650, during the Fronde (1648-1653), when the Cardinal Mazarin put the Prince of Condé under arrest and dispossessed him of the government of Burgundy, he gave this charge to César Monsieur, Duc de Vendôme, an illegitimate son of Henri IV, with the commission to raise a regiment to secure this province. Accordingly, the duke raised Vendôme Infanterie on February 25 1651. The regiment spent its first year bringing various places of Burgundy into submission. In 1652, it campaigned in Provence, contributing to the submission of Toulon. In 1653, the regiment was sent to Guyenne where it took part in the blockade of Bordeaux and in the capture of Bourg and Libourne. It then remained in Guyenne until 1655.

In 1655, the regiment was increased to 16 companies and was involved in the Franco-Spanish War (1635–59), joining the Army of Flanders and taking part in the siege and capture of Condé. In 1656, it took part in the unsuccessful siege of Valenciennes. It then assumed garrison duties in Northern France until the Treaty of the Pyrenees.

At the end of 1659, the regiment was sent in Lower Poitou. In 1661, the regiment was reduced to 8 companies even though it had incorporated Mersoeur Infanterie. In the Autumn, it was sent to Montauban to quench a rebellion. It then returned to Poitou where it would remain until 1667.

In 1667, at the outbreak of the War of Devolution (1667–68), the regiment was attached to the small army of observation placed under the command of Lieutenant-General de Foucauld and operating in Roussillon. It was the only regular regiment of this little army. In 1668, assisted by militia, it relieved Bellegarde. After the peace, the regiment was reduced to only two companies of 80 men.

In 1669, the regiment was chosen to participate in the relief of Candia (present-day Heraklion) in the Island of Crete. It soon returned to France after this unsuccessful attempt.

In 1688, at the outbreak of the Nine Years' War (1688–97), the regiment campaigned on the Moselle and occupied Bonn. In 1689, it took part in the defence of Bonn. After the capitulation of the place, it was sent to Alsace. In 1690, it was sent to Italy where it took part in all operations of the campaigns of 1690, 1691 and 1692, contributing to the defence of Pinerolo and Susa. In 1693, it fought in the Battle of Marsaglia. In 1694 and 1695, it continued to serve in Italy. In 1696, the regiment rejoined the Duc de Vendôme in Catalonia and took part in the combat of Ostalrich. In 1697, it was at the siege of Barcelona where it distinguished itself.

In 1714, at the death of the duke of Berry, the regiment took the name of the Province of Barrois. In 1717, the regiment was renamed Vendôme once more. In 1727, it became a gentleman regiment.

In 1733, during the War of the Polish Succession (1733-35), the regiment served on the Rhine and took part in the attack of the Lines of Ettlingen and in the siege of Philisbourg. In 1735, it fought in the combat of Klausen.

In 1738, the regiment was sent to Corsica where it garrisoned Bastia and defeated insurgents at Borgo. In 1739, it took part in the Combat of San Giacomo. It remained in Corsica until April 1741.

In 1742, during the War of the Austrian Succession (1740-48), the regiment served in Bavaria and took part in the invasion of Bohemia and in the defence of Prague before retreating towards France. In 1743, it was sent to garrison Toulon. In 1744, it served in Italy, taking part in the capture of Aspremont, Utelle, Nice, Castelnuovo, Scarenna, Peglia, Castiglione and Turbia, in the sieges of Montalban, Villefranche, Château-Dauphin, Démont and Coni, and in the Battle of Madonna dell'Olmo. In 1745, the regiment served in Languedoc where it was increased to two battalions. In 1746, it returned to Italy where it took part in the relief of Valencia, in the capture of Acqui, Ponzone, Terzo and Montabuoni, in the battles of Piacenza and Rottofreddo, and in the defence of Provence. In 1747, the regiment took part in the recapture of the islands of Sainte-Marguerite and Saint-Honorat, in the combat of the Col de l'Assiette and in the relief of Ventimiglia.

On March 10 1749, Deslandes Infanterie was disbanded and incorporated into La Roche-Aymon Infanterie. The regiment then garrisoned various places in Provence.

During the Seven Years' War, the regiment ranked 33rd and was under the command of:

When the French army was reorganised on December 10 1762, the regiment took the name of the Province of Hainaut which had previously been used by another regiment raised in 1684 and disbanded in 1762.

In 1755, the regiment took part in a training camp near Valence.

In 1756, during the expedition against Minorca, the regiment remained on the coasts of Provence.

In 1757, the regiment joined the Army of the Lower Rhine under the Maréchal d'Estrées for the planned invasion of Hanover. At the end of June, it was encamped at Bielefeld with d'Estrées' main corps. On July 26, the regiment was at the Battle of Hastenbeck where it was part of the centre under Contades. After the victory, it encamped at Grosselsen near Hameln with the main body of the Army of the Lower Rhine from July 31 to August 2. During the conquest of Hanover, it participated in the capture of Minden and Hanover. After the Convention of Klosterseven, it was cantoned at Harburg with a few picquets of other units and with a squadron of Wurtemberg Cavalerie. In November, they were attacked there by the Hanoverian army who had repudiated the Convention of Klosterseven. The besieged regiment took refuge in the castle where it held till December 30 before capitulating. It obtained the honours of war under the condition that it would not serve any more against the Elector of Hanover or against his allies during the war. Accordingly, the regiment was sent back to France. 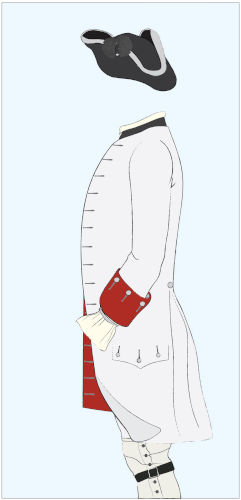 Menguy, Patrice: Les Sujets du Bien Aimé (a very good website which unfortunately seems to have disappeared from the web)