A tradition traces the origin of this regiment to the guards of the Duc d'Alençon, raised in 1576. These troops then became the garrison of Cambrai till October 9 1595 when the town surrendered to a Spanish army. Balagny, then owner of this unit, raised a regiment incorporating the remnants of the garrison. On May 6 1598, the regiment, to the exception of the colonel company, was disbanded. It was a gentleman regiment and accordingly its was known by the name of its 16 successive colonels. It was one of the few gentleman regiments among the old regiments.

In 1600, the regiment was re-raised for the expedition against Savoy but disbanded once more in 1603, to the exception of 2 companies.

In 1614, the new proprietor of the regiment, Charles de Rambures, re-established the regiment (2,000 men) and led it to Bretagne where it assisted the Gardes Françaises in the capture and demolition of the harbour of Blavet. In 1615, the regiment was reduced to 2 companies who took part in the siege of Creil-sur-Oise before being sent to Poitou. In 1616, increased to 10 companies, it was at the relief of Péronne. In 1617, it took part in the attack on Laon and in the siege of Rhétel. In 1618, it was reduced to 2 companies; in 1619, increased to 10 companies.

In 1632, the regiment was sent to Languedoc to quench the rebellion of Monsieur whose forces were defeated at the Battle of Castelnaudary. The regiment was then recalled to Lorraine where it took part in the siege of Trier. In 1633, it was at the siege of Nancy; in 1634, at the sieges of Bitches and La Mothe, and at the relief of Heidelberg.

In 1663, the regiment took part in the expedition in Lorraine.

The fact that La Tour-du-Pin Infanterie, Bourbonnais Infanterie and Auvergne Infanterie were all created during the same year gave rise to endless argumentations about their respective ranking. In 1666, Louis XIV had to edict a regulation stating that each regiment would alternate for the 7th, 8th and 9th ranks on a yearly basis.

In 1671, the regiment was stationed in Dunkerque.

In 1680, the regiment was stationed at Toul.

In 1688, at the outbreak of the Nine Years' War (1688–97), the regiment was stationed at Tournai when it received orders to join the army besieging Philippsburg. It then occupied Heilbronn on the Neckar. In 1689, it dismantled the fortifications of Heilbronn and fortified itself in Pforzheim. The same year, it stormed Neuburg/Entz. In 1690, the regiment took part in the attack of Waldkirch (August 18). In 1691, it was transferred to Piedmont where it took part in the sieges of the Castle of Veillane and Carmagnola. In 1692, it served in Piedmont again. In 1693, it took part in the Battle of the Marsaglia; in 1696, in the siege of Valencia. In 1697, the regiment was transferred on the Moselle. After the Treaty of Ryswick, it was sent to Briançon.

In 1701, at the beginning of the War of the Spanish Succession (1701–13), the regiment was instructed to march from Briançon to Toulon where it embarked for Italy. It distinguished itself at the Battle of Chiari before garrisoning Mantua, sustaining a long blockade. In 1702, the regiment continued to garrison Mantua while a detachment of volunteers of the regiment took part in the Battle of Luzzara. In 1703, the regiment left Mantua and took part in the capture of Bersello, Nago and Orgo and in the bombardment of Trento. In 1704, it participated in the sieges of Vercelli and Ivrea and started the siege of Verua. In the Spring of 1705, it was still part of the army besieging Verua. It later took part in an engagement at Moscolino, in the Battle of Cassano and in the attack of the Imperialist lines between Castel-Leone and Gombetto and entered into Mantua. In 1706, the regiment was charged to guard the passages of the Adige. After the Battle of Calcinato (April 19), it rejoined the Franco-Spanish army encamped at Goito. In September, it was sent to Alessandria, threatened by the Imperialists, but arrived too late to prevent its capture. The regiment then took refuge in Chivasso where it capitulated with the honours of war and was escorted to the frontier from where it marched to Chambéry. In 1707, the regiment was charged to guard the passes of the Alps. In 1708, it was sent to the Army of the Rhine where it was the most senior regiment. It was posted in the Lines of the Lauter part in Wissembourg, part in Lauterbourg where it remained till 1712. In 1713, it was among the force who covered the sieges of Landau and Freiburg.

In 1759, Bourbonnais Infanterie finally obtained precedence over the two other regiments. However, the conflict persisted and a new regulation, dated July 15 1761, reintroduced alternating ranks with Auvergne receiving the 7th rank for 1761 while Bourbonnais got the 8th and Boisgelin (the new name of La Tour-du-Pin) was 9th.

From February 1761, the regiment was known as Boisgelin. When the French Army was reorganised on December 10 1762, this regiment took the name of the Province of Béarn. The former regiment known by this name had been disbanded a few weeks earlier, on November 25.

The regiment counted four battalions and had "prévôté" (provostship).

During the Seven Years' War, the regiment ranked 7th 8th or 9th in the French Army, depending on the year, and was commanded by:

In September 1756, the regiment was sent to Mans then to Saumur.

In May 1757, the regiment received orders to join the army in Germany. On August 1, it crossed the Rhine at Mainz. It took part in the invasion of Hanover, pursuing the army of the Duke of Cumberland up to Stade. After the Convention of Kloster-Zeven, it followed the main body, led by the Maréchal de Richelieu, who encamped at Halberstadt, in Prussian territory, from September 28 to November 5. The regiment was placed in the centre of the first line. After the defeat of Rossbach, the regiment was sent to Lüneburg to cover the retreat of the army. At the end of the year, it took its winter-quarters in the second line of the French army in the town of Hanover.

At the end of May 1759, when the French Army of the Rhine launched its offensive in Western Germany, the regiment remained on the Rhine as part of the Reserve Corps of the Marquis d'Armentières. On July 9, it took part in the siege and in the assault on Münster. It then occupied Giessen and Klein-Liness.

In January 1760, the regiment was stationed in Cologne. On January 3, the regiment was part of a corps under the Marquis de Vogüé who attacked the town of Herborn, an advanced post of Wangenheim's Corps. In this attack the French took 100 prisoners. The regiment along with Picardie Infanterie then cantoned in the village for the night. By May 23, the regiment was part of the left reserve of the first line of Broglie's Army, placed under the command of Saint-Germain. On July 6, the regiment marched from Arnsberg to Velmede (part of present-day Bestwig). On July 10, it took part in the Combat of Corbach where it was attached to Lieutenant-General Comte de Saint-Germain's detachment who force marched to reach the battlefield. On July 31, the regiment took part in the Battle of Warburg where it was deployed in the first line of the right wing. At the end of the engagement, the regiment formed on the heights in front of the bridges to cover the retreat of the French. On October 3, Ségur's Corps (including this regiment) was dispatched towards Hachenburg and Cologne. On October 13, the regiment arrived at Neuss with Castries. 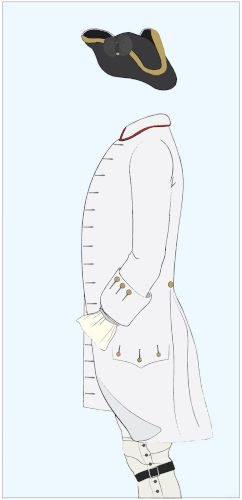