The regiment was raised in Lorraine, according to a decree issued on October 26, 1629, by the Marquis Louis de Nettancourt, formerly captain in Vaubécourt Infanterie, at the moment when Louis XIII was arming against the Duke of Savoy.

The regiment received its baptism of fire in 1631 during the siege of the Citadel of Verdun. In 1633, it took part in the siege of Nancy; in 1634, in the capture of Bitche, La Mothe, Saverne and Haguenau, in the occupation of Mannheim and in the relief of Heidelberg. At that time, it counted 14 companies.

From 1639 to 1648, the regiment campaigned in Germany where it also recruited. Consequently, it became exclusively composed of German soldiers. It was thus treated as a foreign regiment, a situation that would persist until 1687.

In 1649, soon after the beginning of the Fronde (1648-1653), the regiment returned to France but was soon recalled on the Rhine where it was at the capture of Condé. In 1650, it took part in the Battle of Rhétel. In 1651, it was transferred to the northern provinces. In 1652, it took part in the siege of Étampes and in the Battle of the Faubourg Saint-Antoine; and in 1653, in the sieges of Vervins, Rhétel, Mouzon and Sainte-Ménehould.

In 1667, at the outbreak of the War of Devolution (1667–68), the regiment was increased to 11 companies by the incorporation of 7 German companies which had been retained to garrison various places. During the campaign of Flanders, it remained at a camp near Rocroi to secure the frontier.

In 1669, the colonel left with all his 7 German companies to relieve Candia (present-day Heraklion) on Crete Island, besieged by the Turks. The colonel was killed during a sortie and his troops totally annihilated.

In 1672, at the beginning of the Franco-Dutch War (1672–78), the regiment was sent to the Low Countries. In 1673, it gained seniority and climbed to the 22nd rank. The same year, it campaigned once more in the Low Countries. In 1674, 12 companies of the regiment defended Grave where they greatly distinguished themselves. After the capitulation of Grave, these companies were sent to Charleroi to assume garrison duty. In 1675, they took part in the capture of Thuin-sur-Sambre while the rest of the regiment fought in the combats of Turkheim and Altenheim. In 1676, the entire regiment took part in the capture of Condé, Bouchain and Aire; in 1677, in the siege of Freiburg; and in 1678, in the attack of the bridge of Seckingen, in the reduction of Kehl, and in an affair near Strasbourg. The same year, after the departure of Douglas Infanterie, the regiment received the 20th rank which it would keep until 1775.

In 1679, the regiment campaigned on the frontier of Alsace and fought in the Battle of Minden.

In 1684, the regiment was attached to the Army of Roussillon and took part in the combat of Ter and in the siege and storming of Girona, suffering heavy losses. It was then sent to Roussillon to re-established itself. The regiment then served as garrison in Perpignan until 1686 when it was sent to Piedmont.

In 1698, the regiment was part of the camp of Compiègne and then assumed garrison duty in Calais.

In 1701, at the outbreak of the War of the Spanish Succession (1701-13), the regiment was sent to the Spanish Netherlands where it occupied Aarschot. In 1702, most of the regiment, under its new colonel, the Marquis de Charost, assumed garrison duty in the Citadel of Liège. Meanwhile, a few companies were thrown into Kayserswerth which they bravely defended. The two battalions were reunited for the unsuccessful defence of Liège. The remnants of the regiment surrendered as prisoners of war. In 1703, it was exchanged. In 1704, the regiment initially campaigned in Flanders before being transferred to the Rhine. In 1705 and 1706, it remained on the Rhine, taking part in the siege of Haguenau, in the relief of Fort-Louis, and in the capture of Drusenheim, Lauterbourg and Marquisat Island. In 1707, the regiment participated in an expedition in Swabia and Franconia, contributing to the capture of Schorndorf. At the end of the year, it was transferred to Flanders. In 1708, it took part in the Battle of Oudenarde and in an expedition in the Cadzand Island; and in 1709, in the capture of Warneton, and in the Battle of Malplaquet where its colonel was killed in action. In 1710, it took part in the unsuccessful defence of Douai. In 1711, the regiment was sent on the Rhine where it remained on the defensive for two years. In 1713, it took part in the siege and capture of Landau and in the storming of General Vaubonne's entrenched camp established in the mountains above Freiburg.

During the Seven Years' War, the regiment ranked 21st and was under the command of:

On December 10, 1762, the regiment took the name of the Province of Dauphiné. In fact, it was the reinstatement of a regiment which had previously existed from 1684 to 1749.

In April 1757, the regiment was sent to Nantes. It was still on its way when, on May 13 in Angoulême, it was instructed to rather march to Strasbourg to join the Army of Saxony commanded by Soubise. Somewhere between August 23 and September 6, it joined the assembling army in the area of Erfurt and Eisenach. On September 27, it was brigaded with Cossé Brissac Infanterie and Castellas Infanterie under Prince Camille in the second line of the left wing of the Franco-Imperial Army. The grenadiers of the regiment distinguished themselves at Weissensels where they destroyed a bridge in front of the Prussians. On November 5, the regiment was at the Battle of Rossbach, where it formed a brigade along with Cossé Brissac Infanterie under M. de Custine. Their brigade supported the left wing of Piémont Infanterie in the first line. The regiment lost 400 men and its colonel was wounded. The regiment was then sent back to France. At the end of the year, it took its winter quarters in Düsseldorf, in the fourth line of the French Army.

On April 18, 1758, the regiment was at Lille where it received new recruits to replenish its ranks. It was then sent to Normandie for the protection of the coasts after the Combat of Saint-Cast. 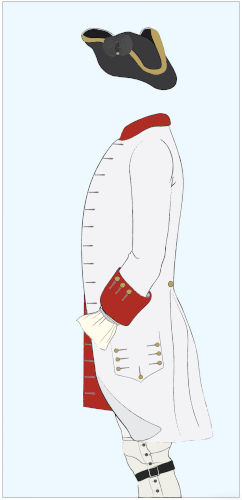 Officers were distinguished by their collar and cuffs made of crimson velvet.

Drummers wore the unknown livery of the colonel-owner: the marquis de Saint Chamond. Later, they wore the livery of the House of Rosen (yellow field).

Menguy, Patrice: Les Sujets du Bien Aimé (a very interesting website who unfortunately seems to have disappeared from the Net)