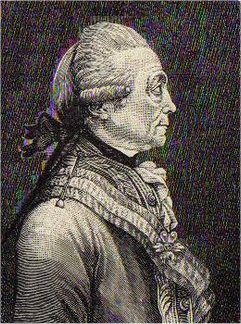 Detail of a drawing of Count Franz Moritz von Lacy

Franz Moritz Lacy was the son of Count Peter Lacy and Martha von Funcke from Livonia. The family of his father originated from the Irish County of Limerick. As a follower of James II, Count Peter Lacy had to go in exile. He thus emigrated to Livonia in 1691. At Franz Moritz's birth, he was in Russian service. In the following years, he assumed command of the Russian army sent to Danzig and to the Rhine in 1734. In 1736, he was in Crimea and in 1741 in Finland.

Lacy spent his childhood in Saint-Petersburg and was then sent to the Ritter-Akademie in Liegnitz in Silesia.

In 1743, Lacy entered the Austrian service as a standard bearer in the infantry regiment von Browne

During the War of the Austrian Succession, Lacy served in Italy, Bohemia, Silesia and the Netherlands. He was twice wounded. By the end of the war, he had reached the rank of lieutenant-colonel.

In 1750, Lacy was promoted colonel and became commanding officer of an infantry regiment.

In 1756, with the opening of the Seven Years' War, Lacy was again on active service. In October, he distinguished himself at the battle of Lobositz where he was wounded once more. He was promoted General Feldwachtmeister (major-general) after this battle.

In 1758, Lacy was placed under the command of [[Feldmarshall Daun now commander-in-chief of all Austrian forces. This duo, later assisted by the brilliant Loudon, stood up to Frederick II for the remainder of the war. In February, a general staff was created and Lacy was made chief of staff (quartermaster-general) to Daun. They adopted a very cautious strategy, trying to wear down the enemy rather than confront him in open battles. In July, Lacy led the relief of Olmütz. On October 14, Lacy took part in the battle of Hochkirch for which he had sketched the plan for the surprise attack. In December, he received the Grand Cross of the Maria Theresa Order for the victory of Hochkirch. The same year, Lacy became inhaber (proprietor) of the former Sprecher Infantry.

In 1759, both Daun and Lacy fell into disfavor for failing to win victories. Nevertheless, Lacy designed new infantry and cavalry regulations and the general regulations issued by Maria-Theresia on September 1. The success of Daun and Lacy at the battle of Maxen on November 20, following a plan designed by the latter, improved their status. Lacy was promoted Feldzeugmeister (general of infantry) for this success.

In 1760, Daun gradually began to doubt of Lacy's capacity for supreme command. The latter was now often in strong disagreement with Loudon about strategic decisions. Nevertheless, Lacy managed to cover the Reichsarmee and to push up to Berlin. However, he did not accomplish any significant strategic goal. On November 3, he took part in the battle of Torgau. Daun was wounded during this battle but he strongly advised against the nomination of Lacy as commander-in-chief arguing that, as the youngest Feldzeugmeister, Lacy would not have been accepted by most of those generals with seniority.

In 1763, after the Peace of Hubertusburg, Lacy was made member of the Hofkriegsrat (Court War Council).

In 1765, Lacy became Inspector General of the entire Austrian army.

From 1768 to 1774, Lacy was President of the Hofkriegsrat. In this capacity, he was given the task of reforming and administering the army. He framed new regulations for each arm, a new code of military law and a good supply system. As the result of his work the Austrian army was more numerous, far better equipped, and cheaper than it had ever been before. Lacy, as military adviser, became very intimate with Emperor Joseph II.

In 1770, Lacy was admitted in the Order of the Golden Fleece.

In 1773, Lacy laid down his offices, despite the admonitions of Maria Theresa and Joseph II, and went to southern France. On returning, he was still unable to resume office.

During the War of the Bavarian Succession, Lacy and Loudon were the chief Austrian commanders against the King of Prussia.

When the Turkish war broke out, Lacy was too old to make a significant contribution.

Lacy spent his last years in retirement at his Castle of Neuwaldegg near Vienna. He died at Vienna on November 24 1801.