In 1745, the third battalion of Bourdon Infantry, which had been created in 1741, became the regiment Hohorst Infantry counting two battalions. At the death of his Inhaber, each of the two battalions of this new regiment became an independent regiment, the present regiment being one of them.

On July 26 1757, during the French invasion of Hanover, the regiment took part in the Battle of Hastenbeck where it was deployed on the right wing under the command of Lieutenant-General Zastrow. It was posted near the Afferde watchtower.

In June 1759, the regiment was part of the main Allied army under the command of Duke Ferdinand of Brunswick. On July 27 in the afternoon, the Hereditary Prince set off from Petershagen, near Minden, with 6 bns, including this regiment, and 8 dragoon sqns, totalling some 6,000 men, and marched south-westward towards Lübbecke to threaten the French left flank and the supply line between Minden and Paderborn. On August 1, the regiment was part of the centre of the corps of the Hereditary Prince who attacked and defeated Brissac's French corps at the engagement of Gohfeld. On August 28 in the morning, the regiment took part in a surprise attack on Fischer's Corps (about 2,000 men) at Oberwetter. Most of Fischer's Corps escaped but 50 men were killed and 350 were taken prisoners. In September, it participated in the siege and capture of the Castle of Marburg. On November 20, it contributed to the relief of the Castle of Albachten. A few days later, it was at the capitulation of Münster. It then took up its winter-quarters at Ucherup (unidentified location).

On July 10 1760, the regiment took part in the Combat of Corbach where it was attached to the right column under Lieutenant-General Count von Kilmannsegg. At the end of July, it was at the affair of the Krayzenberg near Kassel. On July 31, the grenadiers of the regiment took part in the Battle of Warburg where Lieutenant Dinklage was killed and Captain-Lieutenant von Hohorst was wounded.

In 1761, the regiment initially took part in the unsuccessful siege of Kassel. On July 16, it fought in the Battle of Vellinghausen where it was attached to the first line and captured two guns. On August 14, the regiment took part in an action against Belzunce's Corps at Dassel near Einbeck. It took up its winter-quarters in the vicinities of Hameln.

By May 23 1762, the regiment served with the main Allied army. It was attached to Colonel von Rhoedern's Brigade. On June 24, the regiment took part in the Battle of Wilhelmsthal under the command of Ferdinand of Brunswick.

Wissel mentions that, prior to 1748, the distinctive colour of the regiment was green, it was then changed to blue in 1748 and to white in 1761. 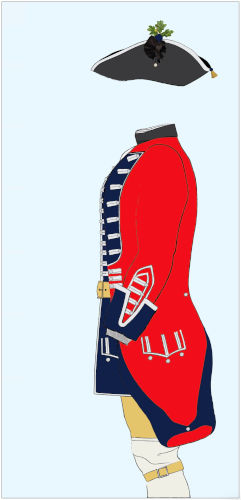 The drum pattern had hoops in alternating dark blue and red diagonal stripes, white drum cords over a brass drum with the Arms of Hanover in the centre.

Regimental Colour: pale blue field; centre device consisting of a mailed arm issuing from a cloud and holding a sword, the whole surrounded by a crowned laurel wreath; a scroll below the crown carrying the motto DULCE ET DECORUM EST PRO PATRIA MORI. Hereafter, we present an illustration from the Reitzenstein Sammlung, dating from circa 1761 (left) and the interpretation of Hannoverdidi (right).