Difference between revisions of "Lehwaldt Infantry"

The regiment was raised in 1626 by Colonel Hillebrand von Kracht and took part in the Thirty Years' War.

During the Seven Years War, the regiment consisted of two battalions and was commanded by:

The numbering system (Stammliste) was first used by Leopold I., Fürst von Anhalt-Dessau (Der alte Dessauer) in the Dessauer Spezifikation from 1737. Around 1780 the numbers were used in the printed Stammlisten, still with some variations for the fusilier regiments. It became official by "Cabinets-Ordre" from October 1, 1806. The present infantry regiment was attributed number 14.

In 1757, the regiment was part of Lehwaldt's Army assigned to the defence of East Prussia against a Russian invasion. On August 30, at the Battle of Gross-Jägersdorf, it was deployed in the first line of the infantry right wing in Lieutenant-General Kanitz brigade. The regiment suffered heavy casualties during this battle. By December 29, the regiment was posted at Tilsit and Demmin.

At the beginning of 1758, from January 10 to June 18, the regiment took part in the blockade of the Swedish fortress of Stralsund. On August 25, the regiment fought at the Battle of Zorndorf where it formed part of the first line of the right division led by Count zu Dohna. During this battle, the regiment panicked and fell in permanent disfavour with Frederick II. On September 25, it was part of the detachment of Major-General Wobersnow who was sent by Dohna from Blumenberg to cut off the Russian detachment left at Landsberg by the retreating main army. On September 26, this Prussian detachment captured Landsberg.

In the campaign of 1759, the regiment was part of the army who contained the Russian invasion of Brandenburg. On July 23, it took part in the Battle of Paltzig where it was attached to Flemming's Brigade deployed in the second line of infantry under the command of Major-General von Wobersow. A few weeks later, on August 12, the regiment fought in the Battle of Kunersdorf where it was deployed in the infantry reserve of the centre as part of Klitzing's Brigade. The regiment suffered so heavily during this battle (loss of 35 officers and 717 men) that it was later reorganised as a single battalion (its recruitment cantons being occupied by Russian troops). On September 21, this battalion took part in the Combat of Korbitz where it was deployed in the first line of the right wing under Lieutenant-General Finck. On November 20, this battalion took part in the Battle of Maxen where it was attached to Lindstädt's Brigade. Completely surrounded, the entire Prussian force finally surrendered as prisoners of war.

For the campaign of 1760, the regiment was rebuilt in Pomerania with troops recruited in Mecklenburg. In January, the newly formed regiment was attached to Prussian Lieutenant-General Heinrich von Manteuffel' Corps. During the night of January 27 to 28, a Swedish force (Skaraborgs Infantry, Wrangel Grenadiers and Meijerfelt Grenadiers) under Major Baron Pehr Ribbing launched a surprise attack in 3 columns to seize the bridge over the Peene at Anklam. They first took possession of the suburbs, then surprised the Prussian outposts near the bridge before the Prussians had time to hoist the draw-bridge. Manteuffel's Corps retired behind the Peene while the Swedes took their winter-quarters. From October 3 to 9, the regiment took part in the defence of Berlin. It took its winter-quarters in Mecklenburg.

On January 31 1761, the second battalion of the regiment formed part of the forces assembled near Rega by Courbières and Werner. On February 11, these Prussian forces reached Colberg. From August 24 to November 13, the regiment took part in the defence of Colberg. During the night of November 13 to 14, the regiment followed the Prince von Württemberg when he broke through the Russian blockade. On November 17, Württemberg made a junction with Platen's Corps at Greiffenberg, the regiment was then assigned to the Reserve under Colonel Falkenhayn. On December 11, the regiment was part of the left column of Württemberg's Corps who marched from Treptow, escorting a relief convoy destined to Colberg. On December 12, the regiment took part in the Combat of Spie where Württemberg was stopped and forced to abandon his project of relieving Colberg. The fortress surrendered on December 16. The regiment took its winter-quarters in Mecklenburg but was soon redirected to Pomerania where, at the end of December, it reinforced Colonel Belling's Corps for the incoming Winter operations against the Swedes in Pomerania. 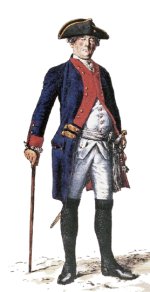 The uniforms of the drummers were similar to those of the privates but had much more elaborate lacing (drummer lace consisting of a white braid with a thin red stripe in the centre) and other peculiarities:

The pikes used as staffs for the colours were probably brown (maybe black).

These illustrations are based on templates taken from illustrations in Reinhold Redlin's Die Fahnen und Standarten der preußischen Feldregimenter 1807-1918.