This Swiss regiment was raised on March 1, 1752 in the Canton of Zürich.

The regiment counted 12 companies, each of 120 men, formed in two battalions and had prévôté (provostship).

During the Seven Years' War, the regiment ranked 117th and was under the command of:

In 1755, the regiment took part in the camp of Richemont.

By August 1, 1757, the regiment was in Germany with the Army of the Weser. At the end of the year, its first battalion took its winter quarters in Wesel while its second battalion went to Geldern (two towns on the Lower Rhine) in the fourth line of the French army.

In 1758, during the Allied winter offensive in Western Germany, the regiment joined the rest of the French army assembling in this area. From March 30 to April 4, it was in the second line of Clermont's Army in the camp of Wesel on the Lower Rhine. In April, when Clermont redeployed his army along the Rhine, the regiment was stationed in small towns around Xanten: Ober-Mömter, Nieder-Mömter, Warth, Haus Balken and Lütteringen. On May 31, after the successful crossing of the Rhine by an Allied army led by Ferdinand of Brunswick, the regiment did not join Clermont's Army at Rheinberg but was rather deployed at an unspecified location. On June 23, the regiment took part in the Battle of Krefeld where it was placed on the left wing of the second line under Saint-Germain whose division bore the brunt of the Allied attack when it tried to stop an outflanking manoeuvre. It defended the woods along the Niers River during 3 hours, repulsing 3 attacks before retiring in front of superior forces, after having sustained heavy casualties. By August 20, the regiment was operating as part of an independent detachment with Reding Infanterie and Jenner Infanterie under La Chenelars.

At the end of May 1759, when the French Army of the Rhine launched its offensive in Western Germany, the regiment remained on the Rhine as part of the Corps of the Marquis d'Armentières. By October 25, still attached to d'Armentières' Corps, one battalion of the regiment was at the main camp at Bochum.

By May 23, 1760, the regiment was part of the Reserve of the second line of Broglie's Army, placed under the command of M. d'Auvet. On June 15, Saint-Germain had assembled the Army of the Lower Rhine near Düsseldorf, the regiment was part of d'Auvet's Division who was sent to the right bank of the Rhine along with his 2 artillery brigades and 15 pontoons. On July 4, still part of d'Auvet's Division, the regiment reconnoitred the area of Arnsberg. On July 31, it took part in the Battle of Warburg where it was deployed in the first line of the left wing. The regiment suffered heavy losses in this engagement. On October 3, Lochmann Infanterie and Planta Infanterie made an unsuccessful attempt to reinforce Wesel. At the end of October, the regiment was sent back to France.

On September 21 1762, the grenadiers and chasseurs of the regiment took part in the Combat of Amöneburg.

In 1763, the regiment was stationed at Mézières. In May, it was transferred to Thionville. 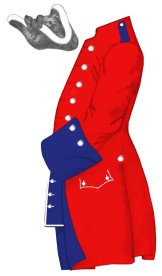